June F&O series: Here's a look at the biggest gainers & losers on D-Street

Dragged down by factors such as a weak rupee, rise in crude prices and trade war fears, the market ended the June series on a subdued note. The Sensex lost close to a percent, while the Nifty corrected over 1.5 percent.

In the June series, stocks such as JSW Steel, Dabur India, Britannia Industries and Century Textile & Industries saw the most rollovers. About 38 stocks saw short covering during the month, followed by 170 stocks which saw long unwinding.

“It (Nifty) traded in a 343 points range between 10,550 and 10,893 levels, inside the trading range of its May series. It consolidated for most part of the series. In the last two sessions, it slipped from 10,800 to close to 10,550, which was the lowest level in the June series. Open interest in June series fell series on series. The July series has begun with total future open interest of 1.91 crore shares. The Nifty has seen rollover of 64.05 percent from the June to July series, with a negative rollover cost of 0.17 percent,” Chandan Taparia of Motilal Oswal Securities said.

Over 40 of 200 stocks in this list managed to end the series in the green, while the rest managed to deliver negative returns. For the June series, Sun Pharmaceutical Industries gained the most, returning almost 18 percent, followed by Dr Reddy’s Laboratories, Lupin, Cipla and Jubilant FoodWorks, which gained between 14.5 percent and 17 percent. 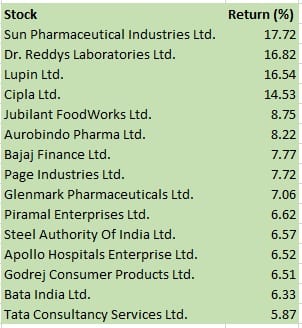 “Traders are going light as the index is somehow stuck in a range, while the upside seems to be limited. Historically, the July series usually belongs to the bulls. But given the current scenario of volatile crude prices, weakness in global indices and rupee weakness, the market’s upmove could be limited,” Taparia added.