172@29@17@143!~!172@29@0@53!~!|news|business|markets|july-auto-sales-signal-recovery-should-you-buy-stocks-from-the-sector-5648081.html!~!news|moneycontrol|com!~!|controller|infinite_scroll_article.php!~!is_mobile=false
Subscribe to PRO at just Rs.33 per month. Use code SUPERPRO
you are here: HomeNewsBusinessMarkets

July auto sales signal recovery: Should you buy stocks from the sector?

Wholesale volumes of four of India’s top five passenger vehicle (PV) makers recorded a jump of 80 percent in July to 152,379 units as against 84,535 units sold in June.

The July auto sales numbers have shown signs of improvement after the coronavirus-led pandemic hit the sector hard. A sharp month-on-month jump was witnessed in car and SUV sales, supported by an uptick in demand from the rural and semi-urban markets.

Despite lockdowns in several states, July wholesales improved on a sequential basis, supported by pent-up demand, better rural sentiment and improved dispatches due to higher plant utilisation levels. However,

volumes still were lower than last year’s levels across segments, except for tractors.

Wholesale volumes of four of India’s top five passenger vehicle (PV) makers recorded a jump of 80 percent in July to 152,379 units as against 84,535 units sold in June.

The management of Escorts, one of the leading tractor makers of the country, said the situation has been continuously easing over the last few days of July and it expects to go back to full capacity anytime up to

Even as the numbers were lower on a yearly basis, there is no doubt that it signalled an underlying recovery.

Shashank Kanodia, Analyst, ICICI direct said: "Yes certainly, auto numbers in July 2020 signal recovery from COVID-19 induced shock. The recovery however is being led by the rural and semi-urban focussed segments namely tractors and motorcycles. At the retail level for the industry, volumes are back at near 65 percent of pre-COVID levels. Domestic three-wheelers as well as M&HCV segment however are yet to see meaningful recovery."

"Yes, the July numbers indicate a possible pick up in demand led by semi-urban and rural demand. Further, the preference towards personal mobility is also driving sales," Makharia said.

Brokerages believe that the auto sales will continue to show signs of improvement in August also as production will pick pace.

"August wholesales are expected to be better month-on-month (MoM) due to the ramp-up in production levels. Volume trajectory will improve in the coming quarters on a low base and pent-up demand, better rural sentiment and gradual improvement in economic activity," said brokerage firm Emkay Global Securities.

However, some experts point out the fact that the supply concerns will continue in the near-term, which will soften demand for the next 2-3 months even though the demand for the entry-level cars and bikes are likely to be robust due to re-opening of the economy and norms to maintain social distancing.

"We believe the industry to turn positive on a YoY basis from the second half of the financial year onwards supported by a low base, normal monsoon, festival demand, better retail finance and improvement in economic activity," said Vinod Nair, Head of Research at Geojit Financial Services.

What to buy in the sector?

The sector has a long way to go to become a favourite of investors. Even though there may be stock-specific buying, the entire sector does not look lucrative.

"Given the sharp run-up in auto stocks in the recent past, the sector is not a blanket buy anymore. We are still positive on rural centric names such as Mahindra and Mahindra, Escorts in the auto OEMs front," said Kanodia of ICICI direct.

"In the ancillary space we like Minda Industries given its constant penchant to increase content per vehicle and its presence in new-age technology products. In the prevailing times, the focus should be on picking up businesses that are capital efficient in nature and possesses healthy balance sheet strength (low debt) with a history of generating positive Cash flow from operations," he said. 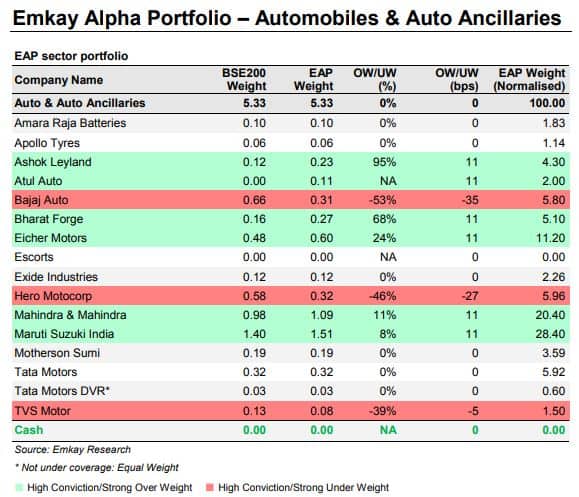 "Maruti with its more than 50 percent share is our preferred sector pick. Within auto parts, we have a 'buy' rating on Endurance, which will benefit from its increasing content supplies to the two and three-wheeler OEMs. The parts supplier has acquired the European parts companies - Adler and Grimeca, which will further enhance their technical competence," said Makharia.

On a one-year forward basis, the Nifty Auto is trading at 28 times which is at premium comparing to its historical average at 18 times.

However, experts highlight that P/E is not the best method in analysing the sector today.

"The sector was already reeling under pressure during pre-COVID and current demand is very low. In the near-term, the trend will be volatile due to uncertainty and over-optimism recently. In a medium to long-term basis, the commercial vehicle sector will turn out as a dark horse and auto as a good candidate of contra-bet," said Nair of Geojit Financial Services.

Nair believes Maruti and Hero will play a vital role on account of their large presence in smaller cars and entry-level motorcycles.

"Escort will continue to witness stability in demand owing to government support for the agricultural sector and good monsoon. We have a positive marking on Bosch for the being the leader in the Fuel injector system in regard to the BS6 transition and Minda industries for the benefits of censor and controllers," Nair said.