Is Tata Motors on track to go debt-free by next fiscal?

In the most recent earnings, even though the domestic business performed well, overall performance was poor due to losses at JLR.

Tata Motors has been promising its investors a net-zero automotive debt by fiscal year 2024 for quite some time. Tata Sons chairman N Chandrasekaran also said that at the company's AGM last year. And in its latest earnings announcement, the company management reiterated that target.

But the question is - is the target really achievable? Given the recent trend of rising debt, and an erratic cash flow, analysts have their doubts. The poor performance of Jaguar Land Rover (JLR) – its largest subsidiary - is adding to the company's woes.

“It will be a miracle,” said Sandip Sabharwal, an investment advisor who has previously headed equity investments at SBI Mutual Fund and JM Financial AMC. “It is impossible to understand. The company keeps making statements without giving a path. It shows a lack of credibility of management.”

He also cited how JLR is underperforming, and added the trend will not change in the near future either.

JLR accounts for a little over two-third of the total revenue of Tata Motors, according to the company's latest annual report. In the most recent earnings, even though the domestic business performed well, overall performance was poor due to losses at JLR.

JLR, which Tata Motors acquired in 2008 for $2.3 billion from Ford, has been dealing with a number of issues including lockdown and slowdown in business, chip shortage and EV disruption. Some of these have also affected Tata Motors domestic businesses. 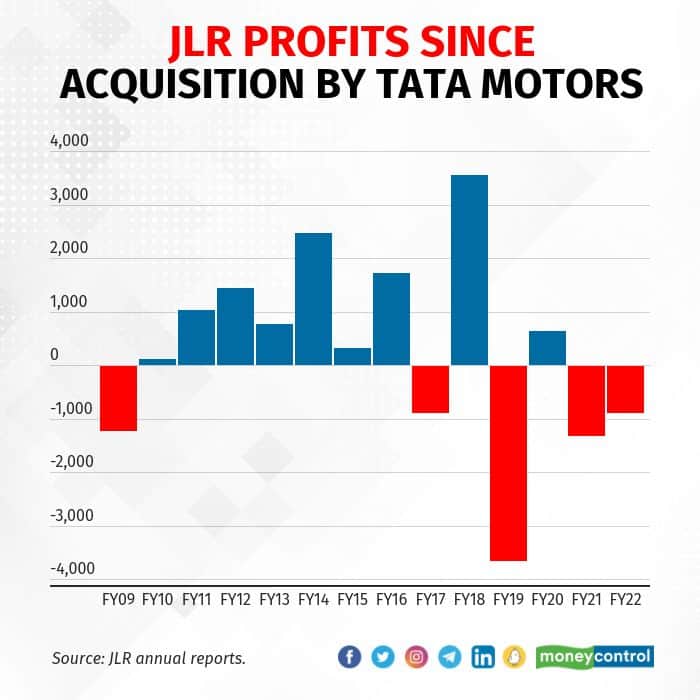 Aniket Mhatre, Research Analyst - Automobiles at HDFC Securities, said the company’s target of being net debt-free by FY24 appears “highly ambitious”. He cited three reasons for that: (1) market share gains are difficult to achieve as JLR lags global peers in electric vehicle (EV) transition; (2) EV transition for all global peers is expected to be margin dilutive; and (3) all global luxury peers are pushing harder for investments in evolving technologies.

JLR gross debt has now increased to 7.9 billion pound as of Q1FY23 from 7.6 billion pound in the previous quarter. And, going by Mhatre’s assessment, the capex which has been responsible for the recent rise in automotive debt at company level will likely rise further.

Rising debt has also led to high finance costs, further putting pressure on the company. The company said its finance costs increased by Rs 217 crore to Rs 2,421 crore during Q1FY23 due to higher gross borrowings.

Ambareesh Baliga, an independent market analyst who previously worked at Karvy Stock Broking, echoed others and said the debt-free target looks a “bit difficult” to achieve. “They (Tata Motors) will have to extend the deadline to FY26 as (cash) flows have been erratic,” he said. G Chokkalingam, Founder and Head of Research at Equinomics, a portfolio management services provider, said he is not interested in the company because its European business is not making money.

However, not everyone is skeptical. There are a few analysts who believe the company will be able to achieve the target. Though that will likely need stake sale in JLR and other subsidiaries of Tata Motors.

Deven Choksey, managing director of brokerage firm KR Choksey Shares & Securities, said the demand situation for the company is “pretty convincing”. He also believes chip woes for the auto sector are largely over, which will work for the company.

“Operationally, the company is expected to generate a large amount of cash. Commercial vehicle offtake has started improving. There is a waiting list for passenger vehicles. On the capital aspect, JLR will eventually be listed and collect capital from the market. These can help the company in retiring the debt,” Choksey said.

Shares of Tata Motors ended up 6.58 percent to Rs 479.25 on August 1 after the company released its July sales data. Year to date, it is down 4 percent.

Shubham Raj is a journalist with over five years of experience covering capital markets. His last stint was with The Economic Times where he wrote on daily happenings in stock markets and led IPO reportage. He also wrote on mutual funds and cryptocurrencies.
Tags: #JLR #stock cues #Tata Motors
first published: Aug 1, 2022 04:08 pm