Is a possible stake sale to LIC the best solution to IDBI’s problems?

IDBI is not a lone case, there are about a dozen more banks whose capital position is precarious and they wouldn’t be in a position to raise capital from the market. The moot question remains, how many will LIC bail out?

IDBI Bank shares surged Friday as the market cheered the possibility of LIC acquiring a piece of the bank. But, is it a cause for celebration or concern? Unlike other state-owned banks, the government had an opportunity to privatise IDBI Bank as it is not covered by the bank nationalisation laws, and there is no legal restriction on the government to trim its stake below 51 percent. Had it done so, the government could have sent a strong signal about its intent to fix the problems of the banking sector. Transferring a part of its stake to LIC is an ad-hoc interim solution and shows the government’s reluctance to cede control.

IDBI Bank – a past worth forgetting!

IDBI Bank’s troubles are well known. The development finance institution-turned- bank has the highest non-performing asset (NPA) ratio as a percentage of loans and was brought under RBI’s PCA (prompt and corrective action) framework last year in May.

IDBI Bank has been losing money for the past three years. During this period the bank’s gross non-performing assets ballooned to 27.9 percent of advances and net non-performing assets touching 16.7 percent and capital buffer fell to a level that will not permit the lender to do incremental business. In medical parlance, the condition is akin to a “patient in a coma” requiring life support. 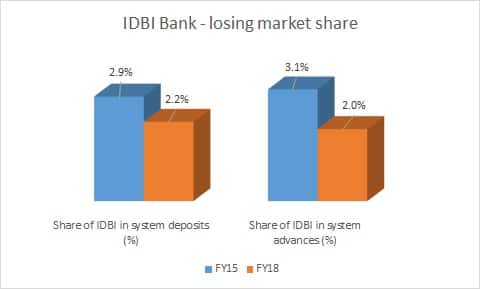 The loss of market share coupled with burgeoning NPAs (leading to interest reversals) has dragged interest margin to sub 2 percent even as the proportion of low-cost deposits has risen from 25 percent to 37 percent over the last three years.

The desperate need for capital

Efforts are on to de-risk the book by increasing the share of retail assets. This is reflected in the fall in risk-weighted assets (RWA). While advances fell by 20 percent in the past two years, RWA has fallen by 25 percent. Despite the improvement in the risk profile, the existing hole was large and warranted urgent capital infusion.

Reserve Bank of India has already directed banks to adopt Basel III guidelines on capital regulation and it will be fully implemented by March 31, 2019.

IDBI has raised Rs 4,408 crore in FY18 by selling stakes in its subsidiaries. In addition, the bank got Rs 12,865 crore through recapitalisation bonds (Rs 7,881 crore, govt hiked stake to 85.96 percent at Rs 71.8 per share) and capital infusion from LIC and the central government. After the capital infusion, the capital adequacy ratio (the capital as a percentage of risk- weighted assets of the bank) would be close to 14 percent on FY18 numbers.

Is IDBI out of the woods?

But, this capital may not be enough. IDBI Bank’s net NPA is a whopping Rs 28,665 crore, which is still more than the bank’s current net worth of about Rs 24,037 crore. The bank will have to make an additional provision of Rs 1,497 crore on the cases before the bankruptcy court.

So the need for more capital need not be overemphasised. Given the current risk profile of its assets, even 10 percent growth in advances would warrant incremental capital of Rs 2,300 crore.

What can the government possibly do?

Going by media reports, if government offloads 40 percent stake in IDBI Bank to LIC thereby bringing down its stake to a minority partner, the government would, at current market price, get Rs 9,734 crore that will only add to its own disinvestment kitty (given that the year is turning out to be difficult with big ticket sale like Air India unlikely to go through). However, a bank in dire need of capital will not get a dime. 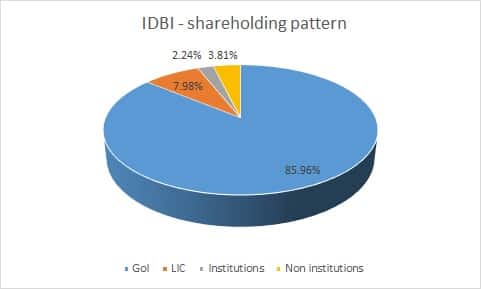 On the contrary, at the current market price if LIC infuses Rs 21,179 crore capital and increases its stake to 50.8 percent and government’s stake gets reduced to 46 percent, the bank gains by way of a large dose of capital infusion.

However, the task is easier said than done. LIC being an insurer will also have to cross regulatory hurdles to pick up a majority stake in a bank. While LIC is a stakeholder in various banks, they are all minority holdings. As a new promoter, LIC is unlikely to add significant value to the management. Hence, while this is a better solution than a complete offer for sale by the government, it is still sub-optimal compared to a complete privatisation.

A large dose of capital in the interim can help clean up IDBI and post elections once the political sensitivity of the move wanes, LIC can monetise its stake. This move should be viewed positively by the shareholders.

However, IDBI is not a lone case, there are about a dozen more banks whose capital position is precarious and they wouldn’t be in a position to raise capital from the market. The moot question remains, how many will LIC bail out?