Hiren Ved, Director & CIO, Alchemy Capital Management believes a new economic expansion cycle is on its way and it should hopefully last much longer than what most people expect.

The year 2017 belongs to the bulls as benchmark indices broke past key resistance levels to hit fresh record highs. The S&P BSE Sensex climbed Mount 33K while Nifty50 rose above 10K, but the bull market is not over yet as it is still in a very nascent stage.

“We are still at the nascent stage of the current bull market. Given the fact, on an aggregate basis, we have seen flat earnings growth in the last four years. We could probably see some earnings growth in the second half of the next year,” Hiren Ved, Director & CIO, Alchemy Capital Management said in an interview with CNBC-TV18.

We are starting a new economic expansion cycle which should hopefully last much longer than what most people expect. Why we say that because there were too many structural changes that were made midway by the government, he said.

There will always be some correction in the ongoing bull market but it may have a longer runway than what most people expect. “Usually, all bull markets are born when macros are worst and our bull market was born back in August-September 2013 and then we have seen just one-way rally,” said Ved.

Going forward, disruption will happen if we see quicker-than-expected hike in global inflation and bond yields. As a result, there is a follow-through in India as well, highlighted Ved. 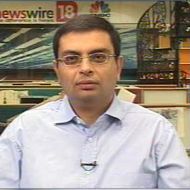 To summarize, in context to India, if inflation surprises on the upside and there is a quicker pullback of stimulus and rate hike by the US then this bull market could be halted for a while.

Commenting on the Gujarat elections, Ved said most market participants are eyeing the margin by which BJP wins the elections. The expectation is somewhere around 105-115 seats, and if the actual tally of BJP is more than that then it could be a short-term trigger for markets. But, if it is less than triple digits, markets could be a little bit more somber about it.
TAGS: #Market Edge #MARKET OUTLOOK
first published: Dec 12, 2017 12:03 pm