India among top-performing markets in the decade 2010-2020; will the story continue?

Analysts believe India's long-term story remains intact and Nifty may continue to feature among the top-performing markets of the world.

As per brokerage firm Motilal Oswal Financial Services, India delivered the third-highest return among key global markets after the US and Japan in local currency terms. 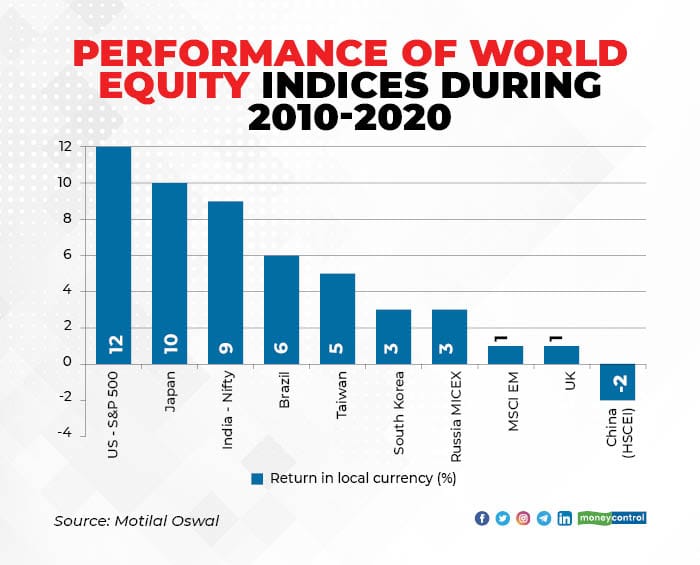 However, in dollar terms, the Indian market was at the fifth position - after the US, Japan, Taiwan and South Korea - in the last decade.

"After almost three decades of coalition governments, the country saw its first decisive mandate for a single-party government in 2014. This was repeated in 2019 with an even greater decisive mandate, the first in five decades that a single-party majority government was re-elected to power. This brought several big-ticket and game-changing reforms to the fore over the last six years," Motilal Oswal pointed out.

Analysts believe India's long-term story remains intact and Nifty may continue to feature among the top-performing markets of the world.

Vijayakumar highlighted that the Indian economy is staging a V-shaped economic recovery. The formal organized sector is doing well even though there is a pain in the MSME sector. This sharp rebound in growth might sustain aided by accelerating digitization and reforms being implemented by the government.

"Sustained growth over the next many years can lead to disproportionate growth in corporate profits supporting stock markets. India’s globally competitive IT and pharma companies are on the cusp of a multi-year expansion cycle," he said.

The expected global cyclical recovery should be viewed as a positive for India.

Bhadha underscored that India’s economy recovered smartly from the COVID lows despite a small, sub-2 percent fiscal support from the government. The recovery is private-driven and hence more sustainable.

The pickup in pace of reforms, production incentives and trade actions have given room for several investment themes across various industries. The public sector is also expected to add to this momentum in infrastructure, housing, irrigation, drinking water, public health and education.

Bhadha expects strong earnings upcycle from next year onwards, helped by the low base and cyclical upswing driven by the above-listed factors.

"The progress on economic reforms and the central bank's intention to keep liquidity taps open will be the critical factor that will play a significant role in the market," he said.

In the long-term, the main challenge is the sluggish pace of economic growth and inflation. Geopolitical issues, policy-related hiccups and political instability may also pose a risk.

"A major short-term concern is the return of inflation, which will force the RBI to tighten policy. If the present low-interest regime, which has turned out to be a major tailwind for the economy, ends abruptly and rates rise, economic growth will be adversely impacted. But this is only a short-term concern," he said.

Bhadha of Nirmal Bang is of the view that the key macro risk is inflation, which is trending above the RBI’s policy target of 2-6 percent and sustained high inflation could see the central bank reducing its liquidity support.

Also, the five states going for elections in 2021 are in the eastern and southern parts of the country, which have historically had a weaker BJP presence, Bhadha said.

"If the government were to adopt populist measures, it could impact the fiscal deficit adversely. Fiscal deficit for FY21 is likely to be around nearly 6 percent – the highest in a decade – that could as well impede the sustainability of government CAPEX in coming years," Bhadha said.

Biswas of CapitalVia Global Research pointed out that the unemployment rate remains at 8.5 percent, and overall the domestic economy is under recession.

"We view the growth to hamper without a faster recovery in the job market, especially in the large informal job market. It could be a major obstacle that can dent India’s prospects going ahead," said Biswas.

Disclaimer: The views and investment tips expressed by investment experts on Moneycontrol.com are their own and not that of the website or its management. Moneycontrol.com advises users to check with certified experts before taking any investment decisions.
Nishant Kumar
Tags: #markets #Nifty #Sensex #video
first published: Jan 19, 2021 08:09 am