The momentum indicator like RSI breached below 50 levels on the daily charts which indicate bulls are losing their control over the market for the short to medium term.

During this week, the Nifty50 has made Lower Top Lower Bottom formation after the Dark Cloud Cover candle pattern, which was formed last week, indicating cautious sentiment of the market for the short to medium term.

On the daily charts, the Nifty has closed below its 20-Day SMA for the first time after 3 months which confirms the profit booking at higher levels.

However, the momentum indicators like RSI breached below 50 levels on the daily charts which indicates bulls are losing their control over the market for the short to medium term.

The stock had entered in a corrective phase after made a 52-week high at Rs 666 mark and moved lower towards Rs 495, this coincides with multiple touch points level and 38.2 percent retracement level of Rs 240 to Rs 666. The stock have found strong support near Rs 495 levels and bounced back sharply with the bullish formation of Higher Top Higher Bottom pattern and once again sustaining near 52-week high levels which shows strong positive undertone of the stock.

The momentum indicator like RSI is sustaining above 60 mark indicating strong positive momentum of the stock. As per price pattern, we feel that the stock prices gain momentum and move higher toward the 52-week highs of Rs 666 and eventually towards Rs 758 (61.8 percent extension level of Rs 240 – Rs 666 projected from Rs 495 levels).

Investors can accumulate TVS Motor at this point and hold with a target of Rs 758 and maintain a stop loss of Rs 590 on closing basis.

L&T Infotech has formed CIP formation (Change In Polarity) near Rs 6,400 levels which coincide with Rising Gap support, indicating the stock has limited downside with strong support cluster near Rs 6,400 mark. Currently the stock is resuming its primary uptrend with Higher Top Higher Bottom formation which shows strong positive sentiments of the stock for medium to long term.

The stop loss for this trade set up would be Rs 6,400 levels of closing basis.

On the medium to long term charts, the UltraTech Cement is maintaining its bullish formation. After making a record high of Rs 8,073 levels, the stock has corrected till Rs 7,007 levels which is around 50 percent retracement level of previous advance from Rs 5,970 to Rs 8,073 levels.

We witnessed a sharp bounce after bottoming out of the stock and it has once again formed Higher Top Higher Bottom pattern on the daily charts. Also it has sustained above its 20-Day SMA which shows strong bullish undertone of the stock for medium to long term.

Looking at the prices action and the momentum indicators and other technical parameters we believe this stock has a lot of upside potential left.

Going ahead we expect bullish momentum to accelerate if the prices breach above the Life Time High of Rs 8,073. If this level is breached, we might see the stock move towards the Rs 8,306 levels. The stop loss for this trade set up would be Rs 7,000 levels of closing basis. 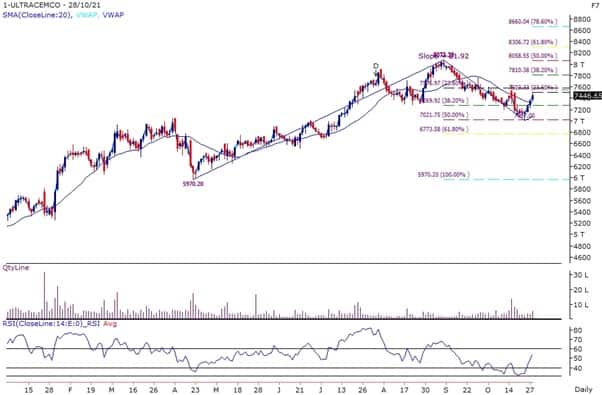