Axis Bank has been forming a higher high higher low pattern after bouncing off the Rs 648 mark. In the week started January 24, 2022 the stock broke above the 20-Week SMA (Rs 734) post which the prices continued to move higher.

The RSI (relative strength index) plotted on the weekly time frame has moved above the 50 mark and is currently moving higher towards the overbought level, indicating increasing bullish momentum in the prices.

Going ahead, we expect the prices to move higher towards the previous swing high of Rs 870, after that we might see a move towards Rs 936.

We recommend a stop-loss of Rs 760 on daily closing basis. 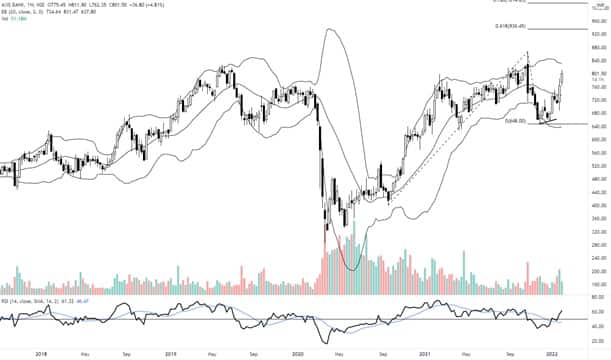 Maruti has been witnessing a rangebound move since January 2021 and has been moving between Rs 6,400-8,353. In the week started January 24m the prices not only breached but also managed to close above the Rs 8,350 mark. This was backed by good volume buildup indicating participation in the up move.

The RSI plotted on the weekly chart can be seen placed above the 50 nark and moving higher, indicating increasing bullish momentum in the prices.

We recommend a strict stop-loss of Rs 8,200 on daily closing basis. 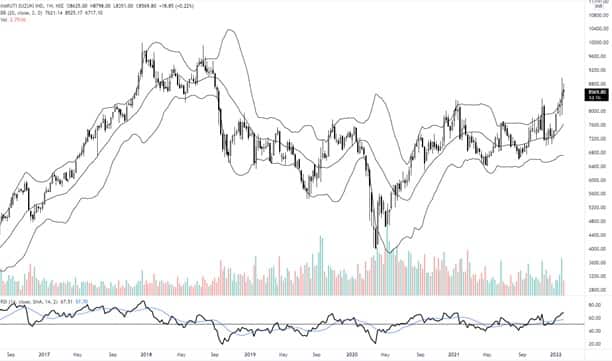 Biocon has broken above the 6 months consolidation. Along with the breakout the stock has also breached above the 50-week SMA resistance and formed a strong bullish candle.

The RSI indicator plotted has also broken out of the range and is confirming the breakout.

We expect the stock to move higher towards Rs 430 and if managed to cross above Rs 430 then eventually towards Rs 460 level. One should maintain a strict stop-loss of Rs 370 on daily closing basis for this trade. 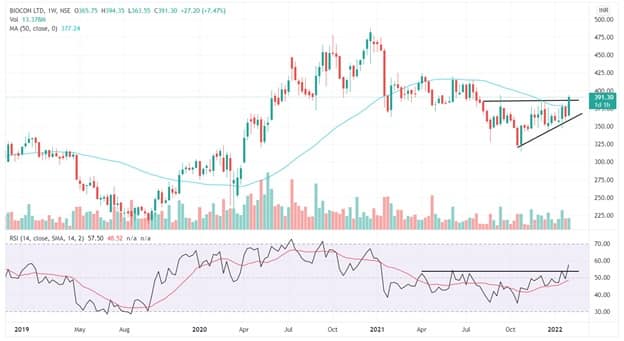