We have seen a weak start to the year with volatility globally & locally seeing stocks underperform. However, we think you could see another 10% upside in FY19 from June/July period onward as earnings start to grow.

The market could see another 10 percent upside in FY19 from June-July onward as earnings start to grow, Sanjiv Bhasin, Executive Vice President, IIFL, said in an interview to Moneycontrol's Kshitij Anand. Despite the recent correction, Bhasin believes that the Nifty is headed to 12,000 by March 2019.

Q) D-Street saw a breather after a 10 percent kind of decline from the highs this week. Do you think the pain is here for some more time?

Well, the old adage of 'greed & fear' is being perfectly played out with most participants extremely greedy at 11,000 and now fearful at 10200.

It was too good to last as 2017 saw hardly any volatility. The pain from February onward is a good wake up call to investors that there are no free lunches and volatility is the name of the game. 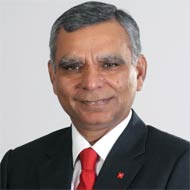 Most of the pain may be over at least in midcaps where corrections have been over 15-50 percent. On the Nifty, we could test 9800-10000 on the lower side in the month of March given that LTCG, dividend tax on mutual funds & NPA recognition on banks may see more pressure on bonds.

Do you think the threat of a global trade war is real? How will it impact India Inc?

It will affect most countries globally, India included as exporters to the US would see pressure on business. However, the near-term pain could be a buying opportunity as in the longer term, Trump policies are having a huge positive on base metals & commodities.

The worst hit would be steel & aluminium sectors with Tata Steel on the steel side & Hindalco on the aluminium side hurting as Novelus the Canadian arm of Hindalco will have to bear large part of the pain.

Q) FY18 belonged to the bulls but what is your outlook for FY19?

We have seen a weak start to the year with volatility globally and locally, seeing stocks underperform. However, we think you could see another 10 percent upside in FY19 from June/July period onward as earnings start to grow. Our Nifty December 2018 target is 11700 and  March 2019 target 12000.

Q) After this recent correction, do you think inflows into MFs which picked up the pace in 2017 could now see some redemptions?

Well, the money which exited fixed income at 6.5 percent on yields to enter stocks is facing a double whammy with yields rising to nearly 7.9 percent and stocks doing poorly near term.

However, we think that once volatility subsides from April middle onward you should see flows pick up. We do not expect much pressure on redemption as equities as a favoured asset class is here to stay with most new entrants prepared to stay put on a longer timeline.

Q) Do you think there could be more skeletons which could come out of the closet in the banking sector especially after the Nirav Modi-PNB saga? It looks like woes for the banking sector is here to stay and if it spreads towards private banking space, it could be disastrous. Do you agree?

A) Well, the fraud episode of Nirav Modi could be termed as a one-off & as a prelude to that most other cases being opened are mostly crony Capitalism which has existed for a long time.

Most of the facts are well known as power, telecom, metals & infra have been stressed assets & most banks have already provisioned for them.

The bark may be worse than the bite & hence any further pain points may already have been priced in hence giving buying opportunities on stocks or sectors in financials.

ITC is an extremely compelling buy at current levels with a target price of Rs 400 in the next 2 years. All its businesses are doing very well which also includes FMCG.

ITC Hariyali, Paper, milk, hotels, and in the apparels with the Wills Lifestyle brand growing should auger well for the stock. The underperformance in the tobacco business should stop and volume growth, as well as pricing, could come back.

The Aashirwad Atta brand itself does over Rs 4,000 crore of business; hence, ITC is now a full-fledged giant with tobacco no longer being the only growth driver. The stock trades at 27 times and 1-year forward. IIFL expects to double of market cap in the next 2-3 years.

SAIL has seen a very good performance at the balance sheet level with cost controls driving EBIDTA margins to the highest level seen in the last 3 years.

Also, it is the best player on local dynamics as it is least affected by any US protectionist measures. SAIL is an integrated play with captive coal and iron ore seeing synergies play out very well. It is a buy at Rs68 for a target of Rs150 in the next 2 years.

NBCC is the best play on the construction sector in the Tier 1/2/3 cities in India with company spearheading all Government land banks and having an order book of over Rs 1 lakh crore.

The best part about NBCC is that it does business with no capital requirement from the Government & is seeing its project management consultancy (PMC) business expand at the fastest rate since inception.

Also, Government construction and property development are seeing the highest growth rate in recent times. The stock is a buy at Rs185 for a target of Rs 400 in the next 2 years.

REC is a power finance Company where NPA levels are the lowest in the industry. It mostly does 86 percent of its business with state discoms and has had no default even though power has been under stress due to poor linkages with coal, raw materials being under pressure.

The pressure on pricing is another pain point for thermal power Companies as solar power rates hurt competition. However, it is a Navratna Government undertaking and has a dividend yield of over 7 percent at present price of Rs 125.

We think the Government will see more relief measures like UDAY & Saubhagya Yojna to do away with stress on Power discoms and provide more funding for power financiers. The stock is a buy at Rs125 for 2 year time period and a target of Rs250.

ICICI Prudential Life Insurance Company is the best new listing in the insurance sector with double-digit growth expected at least for the next 5 years.

Also, it will see earnings get a boost from higher bond yields as most investments are linked to benchmark yields.

Growing insurance business coupled with positive dynamics of rising middle incomes will see the stock double from present levels in next 3-years. The stock is a buy at Rs 380 for a target of Rs 750 which could be achieved in the next 3 years.

Q) FIIs seems to be bailing out from Indian markets, do you think the trend could continue at least for the year 2018?

The rise in bond yields in the US from 1.5 percent in June 2016 to over 2.85 percent presently has seen emerging markets and India see foreign selling take place.

However, the volatility could be seen as another factor to sell in India as markets see money flow back to the US. This may be temporary as we think earnings in Indian Corporates should see double-digit growth & foreign flows will return to play the emerging market growth & demographic advantage of Indian consumption story.