Here's what mutual funds bought & sold in January; do you own any?

The benchmark indices hit a record high in mid-January due to the run-up ahead of Union Budget, but the correction towards the end of month wiped out those as well as the previous month's gains.

The major reason - the widespread Coronavirus (death toll in China around 1,300). The novel coronavirus has dented global sentiment, including in India. At the end of January, Sensex had fallen more than 500 points and Nifty50 was below the psychological 12,000-mark.

In fact, the mutual fund flow into equity schemes increased substantially during the month to Rs 7,877 crore - the highest in the last 10 months - up 70 percent over Rs 4,499 crore in December 2019, which meant the year started on a strong note.

The inflows into systematic investment plans (SIP) continued to be robust to new all-time levels at Rs 8,532 crore in January 2020, against Rs 8,518 crore during the previous month. 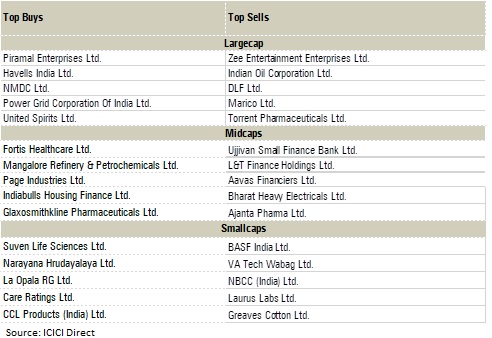 "Midcaps and smallcaps have seen significant price correction in the last 2 years and we are seeing attractive valuations and bottoming of growth concerns in the mid-cap space," said a fund manager from a private fund house.

The broader markets, which had continued to underperform benchmark indices since February 2018, finally regained momentum immediately after the government cut corporate tax rate in September followed by several other measures to revive the economy.

Hence, quality stocks started looking attractive, but the real buying in midcaps and smallcaps took place in December and January.

The BSE Midcap and Smallcap indices gained 3.3 percent and 7 percent respectively, against the 1.3 percent correction in BSE Sensex during January.

"Quality midcap and smallcap companies do look poised for growth as they have reported decent earnings growth. Going forward, with improvement in sentiments along with the earnings, the outlook for the mid and smallcaps looks positive. Those companies which are showing remarkable growth in profitability and are trading at relatively cheaper valuations are likely to gain prominence in rerating. Overall, the large caps are likely to continue being expensive while the valuation gap between the large caps and mid & small caps would be bridged over time," Pankaj Bobade, Head of Fundamental Research at Axis Securities told Moneycontrol.

Overall, the AUM of the mutual fund industry rose to 27.85 lakh crore in January, registering a 19 percent growth year-on-year and 5 percent month-on-month. The growth was driven by the surge of inflows into equity-oriented MFs, steady flows through systematic investment plans (SIPs) coupled with fund flows into liquid/ money-market segments.