172@29@17@138!~!172@29@0@53!~!|news|business|markets|hereamit-harchekars-few-trading-ideas-1365939.html!~!news|moneycontrol|com!~!|controller|infinite_scroll_article.php!~!is_mobile=false
Subscribe to PRO at just Rs.33 per month. Use code SUPERPRO
you are here: HomeNewsBusinessMarkets

Watch the interview of Amit Harchekar, A PLUS Analytics with Ekta Batra & Reema Tendulkar on CNBC-TV18, in which he shared his readings and outlook on specific stocks and sectors.

Watch the interview of Amit Harchekar, A PLUS Analytics with Ekta Batra & Reema Tendulkar on CNBC-TV18, in which he shared his readings and outlook on specific stocks and sectors.

Below is the verbatim transcript of Amit Harchekar's interview with CNBC-TV18.

We have a very strong reasoning for turning bearish on Infosys mainly because they
have formed a dual bearish pattern which is a combination of head and shoulder followed with a island reversal at the top and the levels of USD 32.8 to USD 33 has not been traded since last four years in Infosys. We are expecting this set up is an indication that lot of distribution has already been taken place in this stock and the downside price target of this head and shoulder pattern is projecting somewhere around Rs 1,750 to Rs 1,800.

From behavioral finance prospective whenever promoters of this company sell their stakes at higher levels, historically it has been seen that the stock debates nearly 20 percent in their favour, last time it was Jaiprakash Associates where we had seen news of promoters
selling at around Rs 38-39, the stock has come down to Rs 25. In case of Infosys promoters have sold that stock at round Rs 2,100, so even that projects downside target of Rs 1,750 in the coming days. 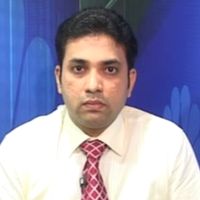 Larsen & Toubro recently has retraced to 50 percent of the entire down move what
we have seen in the coming days, but most importantly the reversal which has happened after this retracement. This has let to a formation of evening star. This is also an indication that lot of buying strength is getting exhausted at higher levels and that is the reason the stock is unable to sustain above Rs 1,550.

Current pull back has been used by long traders to unwind their positions rather then to add positions. So we remain highly cautious on Larsen & Toubro, we are expecting a dip of 3-4 percent in next trading sessions.