While market rallied in July, mutual funds pulled out as there was outflow from equity funds for the first time in last four years on account of profit booking and redemption pressure.

In July, benchmark indices gained around 7.5 percent each followed by similar gains in June as well.

In fact, it has been declining for last few months. The flow into equity funds fell considerably in June to Rs 241 crore against Rs 5,257 crore in May, Rs 6,213 crore in April and Rs 11,723 crore in March when the market actually had seen the highest monthly correction of 23 percent since global financial crisis of 2008.

"Redemptions across most categories led to open-ended equity schemes recording their first cumulative net outflow since April 2019, when the Association of Mutual Funds in India (AMFI) began disseminating data in the current format. Net flows in the category have been on a downward spiral since April," CRISIL said.

Piramal Enterprises remained in the top five buying list for second consecutive month. JSW Steel was also in the top 10 buying list whereas NMDC was in the selling list in month of June. 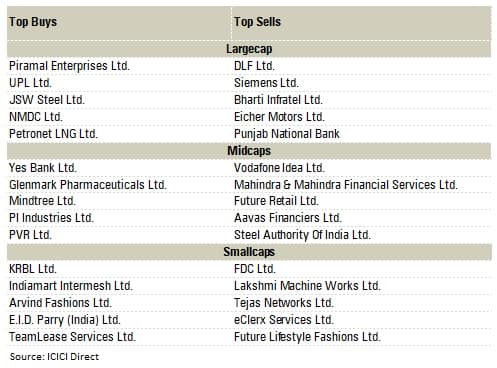 The broader markets also remained in momentum as the BSE Midcap and Smallcap indices gained over 5 percent in July, underperforming benchmark indices but if we compare them from March lows performance then all goes hand-in-hand.

The SIPs have succumbed to job loss pressures and poor market outlook and clarity, Narnolia feels.

But the asset base of India's mutual funds (MF) industry swelled by over 6 percent on-month in July to Rs 27.12 lakh crore, marking the fourth straight month of gains.

"Overall assets under management (AUM) were last seen over the Rs 27 lakh crore level in February, before falling precipitously in March when the market witnessed a correction due to COVID-19 pandemic and ensuing lockdown. Mark-to-market (MTM) gains in equities and firm inflows in debt funds contributed to the July increase. Continued strong interest in gold and equity exchange traded funds (ETFs) also played a role," CRISIL said.

Net inflows from debt funds stood at Rs 91,391 crore in July. The number has been unusually positive given the market sentiments towards debt funds a few months ago.