Out of 296 schemes tracked by pmsbazaar.com, 46 schemes (16 percent of the total) generated better returns than the Nifty in May. Five of them generated positive returns for the month.

Burgeoning inflation fanned by rising crude oil prices due to the crisis in eastern Europe, fears of a slowdown and stagflation in the global economy, the impact of Covid-19 on China’s economy and rising yields on government bonds cornered the Indian stock markets, which continued their slide in May. Alarmed foreign portfolio investors continued to pull the plug on Indian equities amid quantitative tightening even as domestic flows tried to provide some solace.

Although fourth-quarter earnings were in line with expectations, the Indian markets were on shaky ground as the Reserve Bank of India increased the key interest rate by 40 basis points to 4.40 percent in an off-cycle meeting on May 4 to contain inflation.

Experts suggested that this hike was necessary because the RBI was falling behind the curve in its fight against inflation. In the absence of this unscheduled hike, the rate increase in June would have been much more steep and detrimental for both the economy as well as the markets. The RBI has now moved away from its ‘accommodative stance’ and has become more ‘hawkish’ in its approach.

“Pressure was on the broader market through the month,” said Deepak Jasani, head of retail research at HDFC Securities.

The Russia-Ukraine war that started in February is one of the biggest factors fuelling uncertainty. The crisis has already resulted in a surge in global crude oil, food and commodity prices, which have neutralised the impact of the smart recovery in major economies following the pandemic.

“Key drivers for the negative performances are the normalisation of monetary policies globally (to tame consumer inflation), the re-emergence of pandemic restrictions in some cities of China, and the ongoing Russia-Ukraine conflict,” said Rajnath Yadav, research associate at Choice Broking.

Sreeram Ramdas, vice president at Green Portfolio, concurred and said, “During times of uncertainty, companies with weak corporate governance, concentrated operations, and high debt levels are the ones to witness the largest drawdowns.”

It is because of this that the small-cap index has fallen almost 20 percent from its all-time highs compared with the Nifty’s 10 percent decline.

PMS schemes cater to wealthy investors with sizes exceeding Rs 50 lakh. Their professional fee structure is different from that of regular mutual funds.

Of 296 schemes tracked by pmsbazaar.com in May, 46 schemes (16 percent of the total) performed better than the Nifty. Five schemes (2 percent) generated positive returns, when the rest was in the red.

This list may give investors an idea about which stocks the fund managers of these schemes bet on. But they should not be considered ‘buy’ recommendations as every fund manager has his own investment strategy. 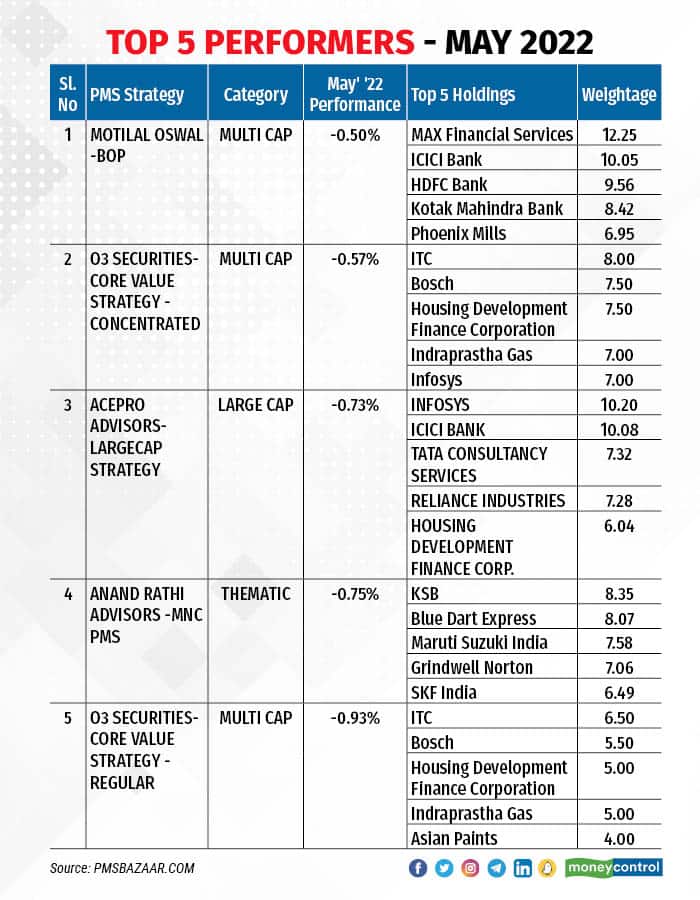 Though this multi-cap scheme generated a negative return of 0.5 percent for May, it was the top performer among schemes that disclosed their holdings. The scheme was focussed mainly on finance/banking stocks and its top five holdings were Max Financial Services, ICICI Bank, HDFC Bank, Kotak Mahindra Bank and Phoenix Mills.

The return generated by this multi-cap focussed scheme for May was -0.57 percent. Its portfolio was quite diversified, with ITC, Bosch, Housing Development Finance Corporation, Indraprastha Gas and Infosys its top five holdings.

The scheme concentrated on certain themes and managed to generate a negative return of 0.75 percent. Its major holdings were in KSB, Blue Dart Express, Maruti Suzuki India, Grindwell Norton and SKF India.

Experts said that from the near- to medium-term perspective, the markets are expected to remain under pressure and bearish sentiments are likely to engulf not only the benchmarks but also the broader markets.

“While the broader market will continue to face selling pressure, breach of important technical levels could result in large-caps coming under greater pressure due to their large institutional holdings, especially if fears of an economic slowdown gather pace,” said Jasani of HDFC Securities.

Experts said external and economic factors would continue to make investors nervous and cautious in the near term.

“Considering the ability to absorb the pain, we are cautious on the performance of midcaps and small-caps,” added Yadav of Choice Broking, noting that with the benchmark domestic index (Nifty) valuation coming down by about 25 percent, large-caps are in the value buying zone. “So currently, we are more biased towards large-cap investing.”

Those looking for fresh investment should consider large-cap stocks, which are available at a 30-40 percent lower valuation.

However, Ramdas from Green Portfolio is more inclined towards midcap stocks.

The midcap category witnesses sentimental overdrives during a bull market and also the steepest corrections compared to the Nifty or large caps, Ramdas added.

“From a valuation standpoint, the midcap index is at 20x PE and considering midcaps have better geographically diversified operations and have stronger balance sheets than small-caps, allocation to midcaps at this juncture will be ideal,” he said.

Disclaimer: The views and investment tips of investment experts on Moneycontrol.com are their own and not those of the website or its management. Moneycontrol.com advises users to check with certified experts before making any investment decisions.
Gaurav Sharma
Tags: #markets #PMS #portfolio management services (PMS
first published: Jun 16, 2022 11:08 am