Bulls are expected to retain charge in the coming week, but there could be some consolidation due to pre-election run-up for last six weeks, experts said.

The rally on March 29, carrying on for the sixth consecutive week, helped benchmark indices in FY19 to post the biggest gains since FY10.

For the week, the Nifty50 climbed 1.5 percent and the BSE Sensex rose 1.3 percent, largely driven by banking & financials stocks on the hope of a rate cut and sustained inflow from foreign institutional investors (FIIs).

Given the buoyancy in the market, there was a strong close of the March series (indices up more than 7 percent) and a good start to the April series, with the benchmark indices reclaiming their highest levels since August 2018.

Bulls are expected to retain charge in coming week, but there could be some consolidation due to pre-election run-up for last six weeks, experts said.

The market will react to auto sales and the Reserve Bank of India (RBI) policy scheduled to be announced in coming week, but the focus is expected to remain on general elections, along with the March quarter and the full year earnings season scheduled to begin in second week of April, they added.

"Current rally in stocks is being powered by optimism over possible re-election of the Modi government and the sharp increase in FIIs inflows, to the tune of almost Rs 48,000 crore this calendar year. FII inflows generally remain high in an election year and we could continue seeing this trend in FY20 as well," Amar Singh, Head - Advisory at Angel Broking told Moneycontrol.

He said markets are also factoring in a big pickup in the earnings cycle, which could further support the valuations.

Overall he expects the markets to perform well in FY20 with the country's annual economic growth rates of about 7 percent, robust domestic demand, low inflation rates, lower oil prices, a strengthening rupee, narrowing trade deficit, and the high probability of a dovish stance by the RBI all supporting the uptrend.

Here are 10 key factors to watch out for:

The key factor which boosted sentiment on first day of April series was the hope of a rate cut in upcoming policy meet.

Most experts expect a cut in the repo rate of upto 25 basis points at which RBI lends money to banks, and according to them, the market has already priced it in, so the commentary would be key to watch out for.

"The market has factored in a 25 basis points cut and a change in stance to accommodative from neutral. The expected increase in liquidity, and a cut in interest rates auger well for the markets," VK Sharma, Head PCG & Capital Markets Strategy, HDFC Securities told Moneycontrol.

RBI's MPC committee will deliberate for three days and pronounce their verdict on interest rates on April 4.

Keki Mistry, vice chairman and CEO of HDFC also said (in an interview to CNBC-TV18) that the RBI would cut rates, but as far as the banking system is concerned, it will have to grapple with the fact that their deposit growth has been lagging loan growth. "That is a big worry for the banking system and because the deposit growth has been lagging, they are not in a position or may not be in a position to lower their deposit rates," he said.

Automobile sales in March are expected to be mixed for the sixth consecutive month citing high inventories, rising ownership cost and deferred purchases during general elections.

Passenger vehicles and two-wheeler sales are expected to be a mixed bag, while the commercial vehicle segment is expected to register weak growth during the month, according to brokerage firms.

In a recent report, Emkay said channel checks indicate a rise ownership cost, deferred purchases during elections and selective financing by non-banking financial companies (NBFCs) constraining volume performance across the automotive segments in the near term.

In the calender year, FIIs net bought nearly Rs 48,000 crore worth of shares and inflow is expected to continue in coming months as well, with gradual pick up DIIs flow after general elections results due on May 23, experts said.

"So the flows we are seeing is a classic sign of India being a low beta market, less integration to the world and with low rate expectations globally now, people are more tolerant of high PEs, which is why we are seeing so much of inflow from FIIs," Neelkanth Mishra, India equity strategist & MD at Credit Suisse told CNBC-TV18.

Crude oil prices continued to trend higher despite worries over global growth and higher inventories released during the week, posting their biggest quarterly rise of 27 percent since 2009. The increase in oil price also triggered a call by US President Donald Trump on March 28 for OPEC to boost production to lower prices.

As far as crude trades at sub $70 level is good for country like India which imports around 85 percent of oil requirement, experts said.

Shreyash Devalkar, Senior Fund Manager at Axis MF told Moneycontrol that oil prices below $70 a barrel is good for India and is one of the factors helping market in upside.

The Indian rupee depreciated by 20 paise during the week to close at 69.16 a dollar, amid rising crude oil prices and caution ahead of RBI monetary policy meeting next week. It appreciated by 60 paise in the March quarter , but fell 400 paise in FY19.

Although US yields have declined sharply during the week, the dollar remained upbeat, mainly on account of weakness in major currencies like euro and the British pound.

"April options build-up shows highest Call open interest at 70 strike and highest Put concentration at 69.0 strike. The rupee is likely to remain in a range in the near term while RBI's policy meet is expected to provide cues on further trend," Amit Gupta of ICICI Securities said.

Apart from RBI monetary policy meeting, which is scheduled for three days April 2-4, the infrastructure output for February and external debt for the December quarter 2018 will be announced on April 1.

Nikkei Manufacturing PMI data for March will be released on April 2, and Nikkei Services PMI for March on April 4.

The Foreign Exchange Reserve for the week ended March 29 will be declared on April 5.

Option band signifies a broader trading range in between 11,400 to 11,800 levels, experts said.

"Nifty rollovers were seen at 67 percent, higher than last 3M average of 62 percent. This happened despite the higher rollover cost in the March expiry week. Thus, market participants are willing to pay the higher spread for Nifty futures in anticipation of continuance of recovery in the April series," Amit Gupta of ICICI Securities said.

"Level of 11,500 holds the relative higher Put base and should remain immediate support. On the higher side, positions have been formed at 12,000 Call while the index should eventually start moving towards these levels," he added.

The Nifty formed a Pin bar candle on March 29, but formed a bullish candle on weekly as well as monthly charts, which indicating that bulls are holding the tight grip on the market.

Having placed at a key overhead resistance of 11,650-11,750 levels, there is a possibility of intermittent downward correction for the next 1 or 2 weeks, which is unlikely to damage the uptrend status of the market, experts said.

"One may continue with long trading positions in the market and minor downward corrections could be used for buy on dips opportunity for near term. Formation of any significant reversal pattern near 12,000 mark around or after the general election could be used for exiting long positions," he advised. 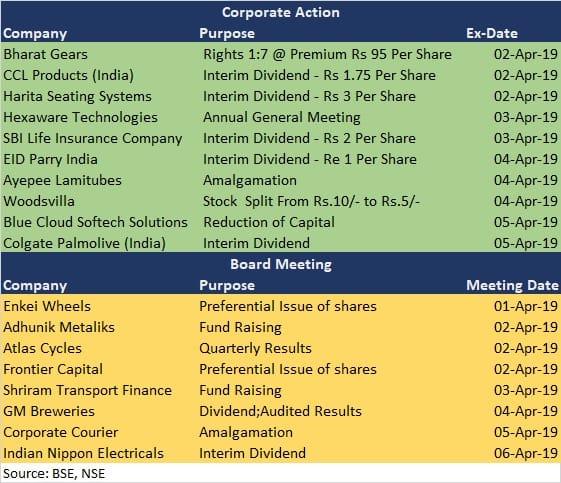