On the global front as well growth outlook grim in the near term as most countries across the globe are battling new COVID-19 cases every day and the economy facing a brunt of this situation.

Since the inception of 2018, the pound had been under severe pressure on account of a hard Brexit as well as the continuous slack in the domestic economy hampering the growth in the UK. This led to a fall in GBPUSD by nearly 8 percent. In line with its international counterpart, GBPINR appreciated by nearly 2 percent. The same story continued in the first half of 2019 as well.

However, since the start of September 2019, both GBPUSD and GBPINR have skyrocketed until January 2020. In that time frame, GBPUSD has gained nearly 8.36 percent while GBPINR had depreciated 7.43 percent. This rise in the pound was on account of the hard Brexit jitters fading away.

To the delight of many market anticipants across the globe, the Brexit drama seemed to be coming to an end when the UK stopped being an EU member on January 31, 2020.

However, a new problem struck the globe in the name of COVID-19 which led to major fall in GBPUSD from February 2020 to May 2020 of 6.35 percent but GBPINR only appreciated by 0.94 percent during the same time frame. 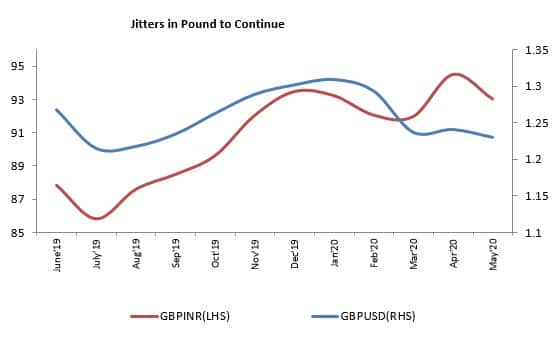 Amid the Brexit saga, Theresa May resigned from her office and Boris Johnson, a hardcore Brexiteer became the PM of UK.

PM Boris Johnson secured a Brexit deal with the EU on October 17, 2019. This deal also got consent from the Parliament but the UK ministers disapproved the PM's hush-hush time table to leave the Union before October 31, 2019.

The snap elections initiated by Boris Johnson in December 2019 was won by him with a thumping majority and with his win the fate of the Brexit deal got sealed.

Once Boris Johnson resumed the Parliamentary session he had enough support in both the houses to get the deal passed. Hence, as expected, the Brexit deal got passed by both the houses of the UK Parliament and the UK finally left the EU on January 31, 2020.

COVID-19 a new name for the killer of global growth

Meanwhile, The Claimant Count Change figure for April also showed a leap of 856,500, far worse than expected and showing that the government's scheme is insufficient to stop the suffering of the labour market.

To give support to the ailing economy, Bank of England (BoE) also cut interest rates to an all-time low of 0.1 percent in March 2020 and it’s not limiting itself on further interest cuts. The Central Bank also made a decision at a special meeting in March 2020 to buy an additional 200 billion pound of UK government and corporate bonds.

Brexit transition deadline and COVID-19 – Recipe for the pound's volatility

With lockdown restrictions easing and economy about to gradually restart in the UK, it would be to monitor sentiment and growth indicators going forward. The chief economist of BoE is expecting a V-shaped recovery in the UK economy, once the situation normalises. However, a second wave of coronavirus cases cannot be ruled out at this period of time.

The Brexit transition deadline of June 2020 is also staring at the UK, but there can be an extension to the period if both parties agree for the same

On the global front as well, the growth outlook remains grim in the near term as most countries across the globe battle new COVID-19 cases daily and the economy is facing the brunt of this situation.