Gold may struggle to retain its sheen, bitcoin can defend $28,500: Milan Vaishnav of Gemstone Equity Research

The current structure suggests that so long as bitcoin can defend $28,500, it has a higher chance of resuming an up move over the coming weeks. A move below $28,500 is likely to infuse some weakness in the cryptocurrency

The last 15 months have been one of the most phenomenal for the financial markets across the globe. On one hand, we witnessed one of the severest meltdowns at the time of onset of the coronavirus pandemic. On the other, we also saw one of the most remarkable turnarounds in the following months.

A look at different asset classes, however, unveils a more insightful picture. While equities enjoyed a steady up move on the year-to-date (YTD) basis, safe havens like gold witness declined and bitcoin saw one of its wildest moves in this calendar year. As is evident from the above relative comparison chart, S&P500 saw a steady appreciation of 18.02 percent on YTD basis. During the same time, gold (XAUUSD) declined 7.04 percent. The most volatile asset has been the bitcoin. The cryptocurrency had gained nearly 97 percent on YTD basis at one point in time but post paring its gains over the previous quarter, it just stands flat with a YTD gain of just 0.30 percent.

Gold has been losing sheen over the past months. There are two factors that are responsible for it. One is the risk-on environment because of which the equities gained. Second, was the strength in the dollar index that played spoilsport for the precious metal. 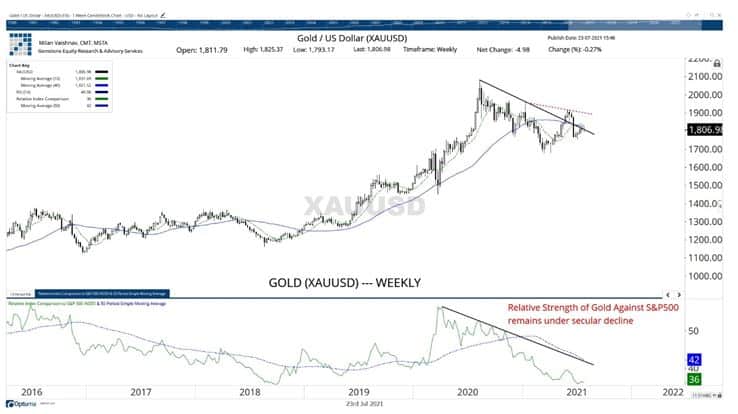 After the high of $2,079 marked in August 2020, gold has been on a corrective decline. It is trading below its 10-week and 40-week MA that stands at $1,831 and $1,821, respectively. Besides this, the pattern analysis of the weekly chart shows that it has multiple pattern resistances to navigate between the 1,800 and 1,875 zone. Unless this zone is taken out convincingly, the precious metal will continue to stay subdued.

The Relative Strength Index (RSI) line against equities represented by S&P500 is under a secular decline.

Another major reason for relative weakness in gold is the dollar index bottoming out in the 89-89.50 zone. 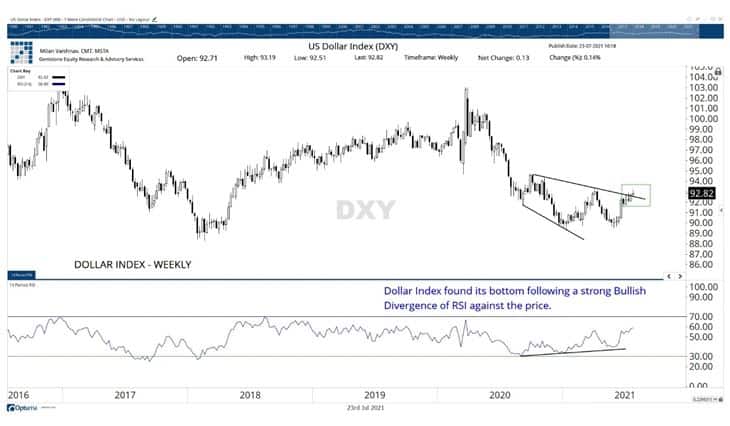 As evident from the above chart, a strong Bullish Divergence was seen on RSI against the price. While the price formed lower bottoms, the RSI did not, and this resulted in the bullish divergence of RSI against the price. The dollar index is also seen penetrating a pattern resistance in the attempt to get stronger. So long as the dollar Index stays above 91, gold will continue to struggle and find it difficult to retain its shine.

Bitcoin, on the other hand, has emerged as one of the most volatile assets. With governments in different countries starting to look favourably towards cryptocurrencies, bitcoin has continued to attract attention from investors. 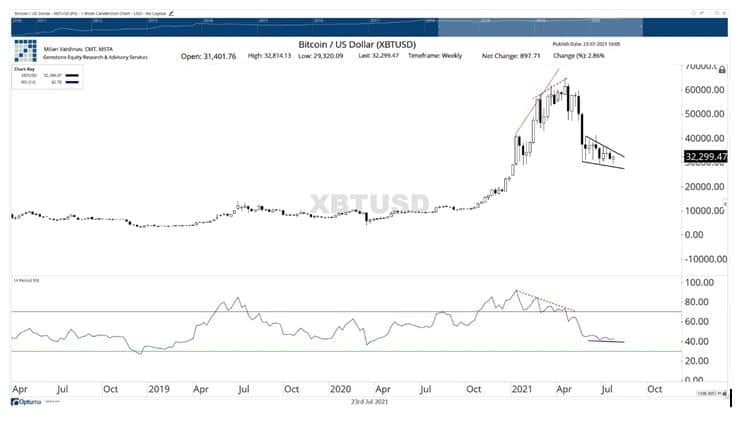 Although bitcoin lost all its 97 percent YTD gains, the chart structure shows potential bottoming out of this crypto currency. While bitcoin moved from $41,000 to $64,000, the move had come with a strong bearish divergence on the RSI. However, over the past several weeks, the crypto currency has formed a falling wedge price pattern. While the price remains in the present pattern, the RSI now shows a mild bullish divergence against the price as it has not made lower bottoms along with the price action.

The structure suggests that as long as bitcoin defends $28,500, it has a higher chance of resuming any up move over the coming weeks. Any move below $28,500 is likely to infuse some weakness in the cryptocurrency.

(The author, CMT, MSTA, is a consulting technical analyst and the founder of Gemstone Equity Research & Advisory Services)
Disclaimer: The views and investment tips expressed by experts on Moneycontrol.com are their own and not those of the website or its management. Moneycontrol.com advises users to check with certified experts before taking any investment decisions.

Milan Vaishnav, CMT, MSTA , is a Consulting Technical Analyst and Founder of EquityResearch.asia and ChartWizard.ae and is based at Vadodara. He can be reached at milan.vaishnav@equityresearch.asia
Tags: #bitcoin #Commodities #Gold
first published: Jul 26, 2021 11:01 am