In the current situation, gold loans are uniquely positioned to capitalise on post-pandemic demand, especially for individuals and small businesses.

The world is currently witnessing an unprecedented crisis in the form of COVID-19, with over 99 lakh cases and approximately 5 lakh deaths worldwide.

This is perhaps the worst crisis that the world has witnessed in a very long time.

Global economies were locked down for months and in addition to the human cost the economic cost of the pandemic have gotten untenable, consequently as a response economies across the world are slowly opening up and trying to reach some semblance of partial normalcy.

The economic response to the crisis has been different for different countries.

While developed economies through their central banks have expanded their balance sheets and have unleashed an unprecedented amount of liquidity directly into the system, the developing economies have taken a nuanced approach and have not resorted to printing currency rather they have opted for a more calibrated approach in the form of sovereign guarantees against loan default.

Although, in the Indian context, banks, both private and PSU are flush with liquidity yet millions of MSMEs are starved to meet their working capital needs as banks are extremely cautious in their lending practices, inspite of sovereign backstopping against loan defaults. Millions of small entrepreneurs, farmers, micro and medium enterprises are struggling to raise money to carry out normal business and kick start the stalled economy.

Deprived of any substantial relief from the normal banking channels this group of borrowers are increasingly turning to gold loans as a last recourse to get secured loans against their gold assets.

The rally in gold prices has come as a welcome relief to both borrowers and lenders alike, gold prices in India has zoomed up nearly 40 percent in one year and more than 23 percent YTD (from January 1 to June 21, 2020) as depicted in the following graph. 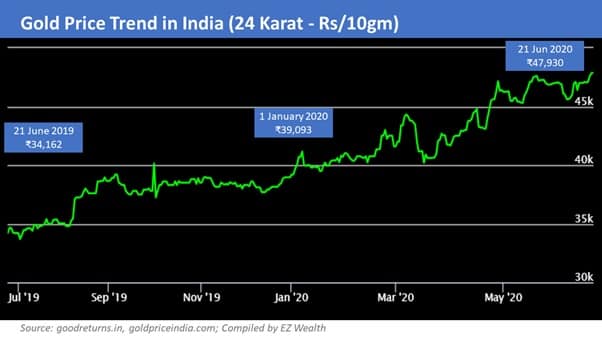 Why gold loans could make the cut in the current situation:

> Most families have seen either a reduction in incomes or loss of jobs. Gold loans may be the least risky choice and also the most feasible choice for them to raise funds to keep the household running in times of economic despair.

> There is the big advantage for lenders in terms of reduction in Loan to Value (LTV) on existing loans. Gold loan companies offer loans at 75 percent LTV, however, the 30 percent rise in gold prices in last one year has effectively brought the LTV closer to 52 percent, which provides them with significant cover in case of default or in the highly unlikely scenario of gold prices correcting significantly downwards.

> The current borrowers can borrow more for the same quantity of gold as it has already increased to a nearly one-third of its value in one year.

> Gold loans have become cheaper since the RBI has cut the repo rate (at which it lends to banks) to its lowest level in 20 years last month. Following this, banks have reduced interest rates on gold loans by up to 40 basis points. For example SBI is offering 'Personal Gold Loan' at 7.75 per cent a year.

> Gold loans work better than most other advances, including personal loans, as interest rates are much lower.

> If gold prices continue to rise, you would also get more funds if you choose to renew the loan.

> Post lockdown and in the current Unlock-1 gold loan demand has increased to a greater degree in tier-1 cities, while it has marginally increased in tier-2 and tier-3 cities.

> Higher redemptions seen in rural areas as customers prefer to sell gold jewellery to take advantage of the price hike.

> The average tenure of the loan is 12 months and interest varies between 7.5 to 11.4 percent per annum.

> The Reserve Bank of India (RBI) has permitted public sector banks (PSBs) to start providing gold loans, and therefore customers can get a better rate of interest from these lenders compared to a traditional NBFC offering gold loans.

During current situation gold loans are uniquely positioned to capitalize on post-COVID demand; especially for individuals and small businesses. An expanded branch network of lenders including NBFCs and a strong digital footprint may just be the recipe to capture this extra market share. Most NBFCs, which have significant gold loan portfolios, are major beneficiaries of the increased in loan demands.

Manappuram Finance, a leader in gold loan NBFCs, has registered an increase in the average ticket size of gold loans from about Rs 38,500 to Rs 41,000, driven by higher gold prices; the lender is expecting a 10-12 percent YoY growth in new gold loans as business start to open up slowly but steadily.

Another private lender IIFL Finance has disbursed over Rs 700 crore in May 2020 as the demand for gold loans has gone up significantly after resuming operations in tier-2 and tier-3 cities where it has significant presence. Top-ups on existing loans contributed more than 15 percent of overall disbursals for IIFL finance. Federal Bank had seen a 10x spike in demand for gold loans in May over April, with over a fourth coming from tier-2 and tier-3 centres, with the average ticket size rising from Rs 1.1 lakh to Rs 1.5 lakh in the last one month.

State-owned Indian Bank, which merged Allahabad Bank with itself, has seen a 10 percent rise in the average ticket size of gold loans at Rs 88,000. About 3.30 lakh accounts availed of gold loans, amounting to Rs 3,000 crore, in May.

As per industry trends and forecasts the demand for gold loans is expected to remain steady. The two primary reasons for this trend to sustain is the belief that gold prices are expected to stay elevated for the next couple of years and the current risk aversion of traditional banking channels is expected to drive more consumers towards gold loans.

With the re-opening of economic activities, more and more businesses will need liquidity to meet their working-capital requirements. Gold loans would perfectly fit the bill as a tool to raise liquidity because gold loans are secured loans and therefore are offered at lower interest rates in comparison to a normal personal loan which is unsecured.

Institutions offering gold loans which have a vast geographical reach especially in tier-2 and 3 cities and a strong digital footprint are expected to be the major beneficiary of the gold loan rush in the near future.

(The author is Director at Wealth Discovery)