The trend may remain unabated in the coming quarters too if the current situation does not change even as there are some positives that are comforting, said experts.

The trend may remain unabated in the coming quarters too if the current situation does not change even as there are some positives that are comforting, said experts.

Data from NDSL shows FIIs invested Rs 957 crore and Rs 8,970 crore in the Indian market in the month of January and February, respectively, but took out a whopping Rs 1,18,203 crore in March.

Motilal Oswal highlighted that the Indian equity markets corrected significantly in Q4FY20 (down 29 percent in the quarter – the highest QoQ decline since June 1992), in tandem with global equity markets due to headwinds from the COVID-19 outbreak.

In the March quarter of FY20, DIIs inflows (at $10.1 billion) and FIIs outflows (at $6.6 billion) were at record highs, Motilal Oswal said.

The FII-DII ownership ratio in the Nifty500 is at a new low and has declined to 1.4 times from 2.2 times in the last five years.

In the last year, an increase in the FII-DII ratio was recorded in the Insurance sector. Telecom, Real Estate, Private Banks, Cement, Healthcare, Automobiles, Retail and Technology were the other key sectors to see a decline, Motilal Oswal said. 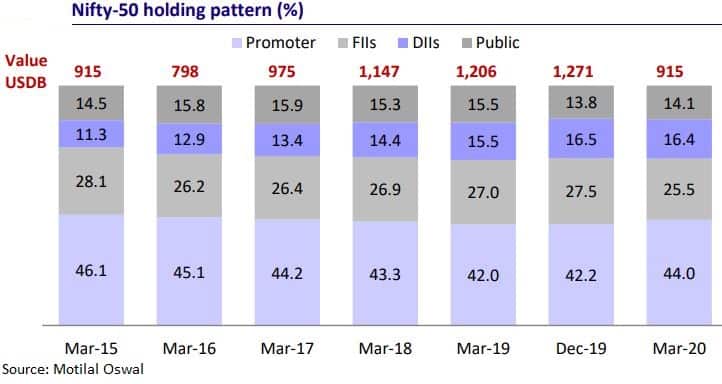 What was the reason behind FPI selling in Q4FY20?

Rusmik Oza, Executive Vice President and Head of Fundamental Research at Kotak Securities highlights two reasons behind the heavy selling by FPIs in the March quarter.

"One was the disappointment on the Budget and the second was the global sell-off on escalating fears of coronavirus outside china. Both of these triggers played out in Feb & March of this year," Oza said.

"Coronavirus spread in the developed markets in March led to panic selling across markets. In India, we witnessed one of the largest FII monthly outflows of nearly $9 billion in March. FII flows were positive in the two months of January and February," Oza said.

Vinod Nair, Head of Research at Geojit Financial Services pointed out that FIIs were on a risk-on mode since lockdown had a high impact on emerging economies like India than the developed market.

"FIIs selling was high on the segments where exposure or holding was high. It also had a high impact on sectors that were highly sensitive to the fall in GDP. For example, the banking sector was the worst hit due to high exposure of FIIs and fall in economy deteriorating their credit growth & quality of the asset," Nair said.

Aamar Deo Singh, Head Advisory, Angel Broking pointed out that the valuation of many Nifty stocks was higher and a selloff triggered by COVID-19 started a chain of selling.

"Valuations were anyways at higher levels pre COVID-19, but at the same time, the fear surrounding the uncertainty due to global lockdown, was the primary reason for this sharp selloff," Singh said.

"All negative news flowing in from all quarters about the economic giants such as USA, Germany and France moving into recession, and a contraction in almost all world economies, also led to a cautious approach by FPIs, who generally have exposure across many markets," Singh said.

Will the trend continue?

A lot will depend on how the COVID-19 situation progresses in the coming days. Also, the complete opening of economic activities will boost morale but the souring relationship between the Us and China may deal a heavy blow to the market sentiment.

Nair of Geojit Financial Services is hopeful that India will perform well in the short-term but he added that the country's performance in the medium-term will depend on the extent of the economy it will be able to reopen.

"India is attempting to catch-up with the rest of the world post huge underperformance. It has factored all the merit and demerit of the stimulus announced by the government. Now, it is anticipating a better economy in Q2, though it may be partially opened while a fully opened economy could happen by the second half of FY21," Nair said.

"India expects a ripple effect from the opened developed market, especially for export-oriented companies and sectors. At the same time, big equity deals announced by the banks with foreign investors have changed the outlook of the banking sector," Nair added.

Oza of Kotak Securities is of the view that as coronavirus cases are receding in Europe and gradually coming down in the US also, sentiment towards equities is changing.

However, he added that the number of COVID-19 cases is still on the rise in India which could deter FII flows in the country in the near future.

"Once the number of cases recedes in India and economic activity crawls back to normalcy we can expect positive FIIs flows to resume," Oza said.

Oza underscored that the large QE program led by Fed & ECB and massive stimulus announced by Japan would lead to surplus liquidity in the global system.

"After few months, we can expect this liquidity to flow into emerging markets, including India," he said.

While the Indian market witnessed sharp selling in March and Nifty fell near 7,500-mark, a bounce was observed towards the end of April.

"The pace of FPI sell-off has come-off since March, which is somewhat comforting. But going forward, the revival of the economy and the effects of the stimulus package, along with the banking sector mounting NPA issue, shall be the key drivers," Singh of Angel Broking said.

"Also, how India is able to manage its CAD, will also have a bearing. Going forward, prospects of reduced income levels and corporate profits, too, will play a crucial role in determining FPIs flows back into the country," Singh said.

Disclaimer: The views and investment tips expressed by investment experts on Moneycontrol.com are their own and not that of the website or its management. Moneycontrol.com advises users to check with certified experts before taking any investment decisions.
Nishant Kumar
Tags: #Market Edge #markets #Nifty
first published: May 29, 2020 02:33 pm