February shopping list: These 15 stocks were in demand by MFs

In February, MF inflow into equity funds increased significantly to Rs 10,800 crore, increased from Rs 7,900 crore in January this year.

It has been utter chaos on the Street since the second half of February with sentiment being ruined due to the spread of coronavirus.

The Nifty50 was in a consolidation mode even in the first half of February, but in the second half, it fell around 800 points amid fast-spreading Covid-19 in China.

Since the mid of February till March so far, investors have lost more than Rs 35 lakh crore worth of wealth following crash across global peers. FIIs net sold more than $6 billion worth of shares from February 24.

But domestic institutional investors (DIIs) including MFs bagged this opportunity to add quality stocks available at attractive valuations or at multi-year low levels. In fact, they supported Indian equities quite well in this market turmoil.

In February, MF inflow into equity funds increased significantly to Rs 10,800 crore, up from Rs 7,900 crore in January this year, while money coming into equity through systematic investment plan remained strong at Rs 8,513 crore for February.

It clearly indicated that the money came in support of the equity market when the FIIs largely preferred to take out by selling shares. 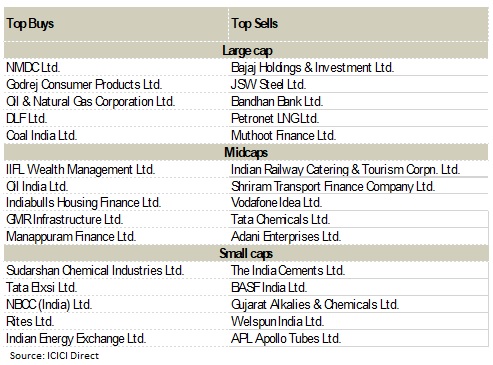 The amount of fall in individual stocks clearly attracted buyers at lower levels. In the Nifty50 itself, 80 percent stocks corrected between 20-52 percent since February 12 till March 16 and during February 13-28, 40 percent stocks corrected between 10-25 percent including Tata Motors, GAIL, JSW Steel, Hindalco, Vedanta, Tata Steel, Eicher Motors etc. Heavyweights also not spared in the fall.

Hence, most of experts advised their clients to do gradual buying in quality stocks to get spectacular returns over the longer period as several stocks look attractive on all valuation parameters though the current situation will take time to ease.

"We are asking our clients to remain engaged with the market. Such disruptions in businesses and trade result in stocks falling to levels from where large wealth creation starts. The time is to look at existing portfolios and sell those stocks that will have prolonged business stress on every intermittent rally and at the same time add into stocks that have a strong business model to not only survive but grow once the business gets into a normal mode," Shailendra Kumar, CIO at Narnolia Financial Advisors told Moneycontrol.

He said, "For those who have yet not invested in the market, this is once in a decade kind of opportunity to deploy investment into equities. Investing in a temporary sub-par business environment rewards the investors with much higher than a normal stock market return."

Globally the market has been quite volatile and bulls have been failed to get foothold on Streets as novel coronavirus infected cases jumped over 1.7 lakh with more than 6,700 deaths worldwide which clearly indicated that the global economic growth has to erase to some extent despite global central banks cut interest rate with heavy fiscal stimulus.

"The markets are showing no signs of stability as the economic impact of the Coronavirus is likely to be significant for many major economies. Even after US Fed's slashing of interest rates to a range of zero percent to 0.25 percent and the introduction of a $700 billion stimulus programme, investor sentiments remain weak," Ajit Mishra, VP - Research at Religare Broking said.

"Given the uncertainty and increasing spread of the virus domestically, we expect that current choppiness could continue in the coming days," he added.