There is hope is that global economies should be on a recovery path in the second half of CY21 as vaccines could be widely available by then.

Rusmik Oza, executive vice president (Head of Fundamental Research-PCG) at Kotak Securities, feels after getting a proper vaccine if global trade picks up, then India could see a structural growth phase led by healthy revenue growth. "This can set the stage for a double-digit earnings growth in coming few years as compared to low single-digit earnings growth seen in the past five years."

FII flows have been extraordinarily strong this month with cumulative net investment of over Rs 50,000 crore. Oza expects FPI flows to remain positive in future also but feels the pace could reduce going forward.

If the thesis of a weaker Dollar and higher liquidity infusion by central banks plays out then India could be one of the biggest recipient of FPI flows, he believes.

Q: Market had a strong run of 73 percent from March 23's low point. Do you think the rally can continue? Or is it time to turn cautious? 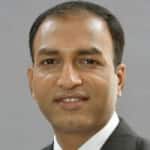 Nifty has decisively broken the previous top of 12,430 mark on both daily & weekly basis. If we join the previous three tops of Nifty-50 and extend it then the last resistance point comes to 12,850. Nifty closed mildly above this at 12,859 last week. If it closes above this level and sustains for more than one week then we can expect some kind of frenzied move in the Index.

On the other hand, if it is not able to break and sustain above the 12,850 level in the coming one or two weeks then we can expect a healthy correction of 10-15 percent in near future. For any breakout to sustain it has to be led by the BFSI sector and Reliance Industries.

From a valuations perspective, there is limited upside visible as we are already trading at peak valuations of 22.6x on year forward basis. Run up in financial sector has pushed market valuations to stiff levels. Current valuations are finding support mainly due to continued economic recovery, hopes on vaccine, low bond yields and possible earnings upgrades.

Any delay in getting a proper vaccine and a stronger second wave could lead to cut in earnings and de-rating in future. It is ideal to let the monthly expiry go through this week and take a fresh view next week. If we see consistent daily and weekly closing above 12,850 then remain invested or else take some money off the table.

Q: Economic data points clearly indicated that there has been a gradual recovery. What are your economic growth expectations for FY21 and FY22, and why?

Economic activity has improved smartly in Q2FY21 on a sequential basis. Most economic indicators show a steep rebound in economic activity with recent PMI indicators above 50 for both manufacturing and services. In fact, manufacturing PMI is above pre-COVID levels. E-way Bills generated have gone back to pre-COVID levels. Consumption of petrol, diesel, electricity have rebounded sharply. Car & two-wheeler registrations have been improving MoM. Freight movement in Railways and at Port has improved substantially.

We expect a further pickup in economic activity in 2HFY21 and FY2022 as beleaguered 'physical' sectors see further normalisation over the next 9-12 months. However, this assumes no resurgence in COVID-19 pandemic in India in the next few months. Overall we expect India's GDP Growth to be (-) 11.5 percent in FY21 versus 4.2 percent in FY20.

Q: What would be the real risks for the Indian as well as global economy over the next one year?

The resurgence of COVID and a stronger second wave could derail the expectation of a healthy recovery in CY21. The IMF has cautioned that the economic path ahead remains 'difficult and prone to setbacks'. The pandemic-related job losses have aggravated social challenges, including income and gender inequality. The record fiscal and stimulus spending has increased sovereign debt and stretched governments' capacity to service debt. Any steep rise in inflation could be a big threat to global economies as it could lead to higher bond yields and also lead to pull back of fiscal spending program.

Q: India seems to be a favourite country for FIIs now a days due to economic recovery when the western countries are facing COVID-19 pressure. Do you think the flow of money will continue in India?

FII flows have been extraordinarily strong this month with cumulative net investment of over Rs 50,000 crore. On a CYTD basis India is the only emerging market to have received positive FII inflows of $12.7 billion as compared to outflows ranging from $2 to 8 billion in most other markets. The flows have just accelerated after the US election results as investors globally expect the Dollar to weaken in future. Central Banks are expected to infuse more money to combat the second wave of COVID. This could bring more inflows into emerging markets with India being one of the preferred markets.

The higher-than-expected jump in earnings, faster recovery on the ground and stable currency in India is also helping FPI inflows. Expect FPI flows to remain positive in future also but the pace could reduce going forward. As we approach the calendar year ending we can expect some moderation in flows. Nonetheless, outlook for CY21 looks promising from a flow perspective. If the thesis of a weaker Dollar and higher liquidity infusion by central banks plays out then India could be one of the biggest recipient of FPI flows.

Q: What are those sectors look attractive on the global front and can majorly be a part of India's exports in coming years?

There is hope is that global economies should be on a recovery path in the second half of CY21 as vaccines could be widely available by then. This could lead to economic rebound and most brick-n-mortar old economy sectors would start delivering better performance. Technology spending by corporates across all sectors is going to accelerate which is good for Indian IT service providers. The governments PLI scheme is aimed to boost exports from India and several sectors like auto ancillaries, pharmaceuticals, electronic exports, food processing, textiles, specialty chemicals would stand to benefit from it.

Q: Do you think there could be major change in policies and easing in global trade war after Joe Biden taking charge?

It is easy to predict some of the internal policy changes that could come in the US as the Democrats had talked about them before the elections. However, it is difficult to predict the external policy changes that could come next year. The US appears to have a divided Congress wherein the Democrats control the White House and the Republicans holding the Senate. It will be slightly challenging to agree and pass crucial bills under this situation. We may also not see quick unwinding of tariffs that US has imposed on China. Under Biden we can expect a more constructive approach towards its allies and old trading partners. This will be time consuming and we can expect gradual improvement in trade ties between US and China over a period of time.

The best thing to happen with India incorporation is that earnings are coming without any strong volume growth. Over the last three years earnings had disappointed due to poor GDP and revenue growth. This has led to underutilization of capacities and no fresh capex. Major part of free cash flows have gone in debt repayment and deleveraging. There has been remarkable improvement in the debt-equity ratios of most companies and with lower bond yields the weighted average cost of capital has also gone down. After getting a proper vaccine if global trade picks up then we could see a structural growth phase led by healthy revenue growth. This can set the stage for a double digit earnings growth in coming few years as compared to low single digit earnings growth seen in the past five years.