Yogesh Bhatt, ICICI Prudential Mutual Fund expects the ongoing quarterly earnings to be a mixed bag with overall growth of about 3-5 percent.

An annual earnings growth of 13-15 percent over next couple of years will prove to be a real confidence booster for the market, says Yogesh Bhatt, ICICI Prudential Mutual Fund. At current levels, though, markets are not cheap, he adds.

Bhatt expects the ongoing quarterly earnings to be a mixed bag with overall growth of about 3-5 percent.

Despite slightly expensive valuations in some good stocks, he finds the banking sector promising for a longer term. Similarly, pharmaceutical is another space he sees value in considering the sector is largely rid of the US Food and Drug Administration woes and has huge potential for growth in US markets.

In an interview to CNBC-TV18, he shares his view on some of his other high conviction bets.

Below is the verbatim transcript of Yogesh Bhatt’s interview to Anuj Singhal & Sonia Shenoy on CNBC-TV18.

Sonia: I was going through a lot of your funds and you do have high conviction in names like Power Grid etc. I wanted to understand what the sense is you getting about the economy facing sectors, like the power utilities etc and what could be the investor potential here in some of these names?

A: Ideally when we are investing in some of these sectors the whole idea is whether we are getting kind of a sustained growth over a period of time and if you see the history these are some of the names and the utilities where we are getting that kind of growth. Other than that if you see the recent data also which is kind of reflecting double digit growth in the generation part. That also bodes well for the entire sector and thirdly of course, with the kind of interest rates reduction what we have seen over the last one and half year in the economy and going forward also there are some expectations of interest rates cut which is likely to come maybe in next one year's time. These are the sectors where lowering of interest rates also bodes well because of your return on equity (RoE) profile which is in the range of 15.5 -16 percent. These are the sectors and the stock which should ideally benefit from these scenario. But putting all these together on a risk adjusted basis this give you a kind of decent 14-15 percent kind of number on a horizon of 3-5 years.

Anuj: Your ICICI Pru Top 200 fund has done remarkably well. Three year return of 23 percent and I see a lot of exposure to banks and Non-Banking Financial Company (NBFCs) and some of the recent listings as well. Do you think this sector of NBFC could be a compounding sector?

A: The interesting thing you just mentioned that the entire - first of us let us look at the entire banking sector per se. Of course on a short term basis of last six months to a year it seems that this sector has done well specifically from March 2016 lows. But if I take a little longer period of time, say five years kind of horizon this is one sector where there are lot of problems which was arising and it was all because of the state of the economy which was not doing that great. We had come down from 10-9 percent gross domestic product (GDP) growth to almost five percent. Then there was of course interest rates which was much higher and then there was a whole lot of non-performing loans (NPL) issues. These are the problems which of the past and looking forward if I take a three to five years view these are the issues which are getting resolved. Of course it is happening in its own speed but confidently these sectors or the stocks also has to take out this very clearly.

The other point which you just mentioned is that the NBFC space was the ideal situation to capture the opportunity which was kind of missed by some of these large banks and of course the main reason may be they were busy in their own problems and that is why the concentration on this piece was not there. That is where the entire opportunity arises. This is where the kind of opportunity was there. And if you see the valuations also of course I do agree that there are some names which are quoting at maybe 2.5-3 times book. But if I see overall piece and the size of the opportunity I think this space still looks very promising from here also.

Sonia: I notice that in your top 200 fund your multicap fund you have Thomas Cook as one of your top holdings. We have just had its subsidiary Quess Corp list today and in face as we speak Quess Corp is inching up higher. It is almost at Rs 500. What are your thoughts on this one and on the promoter Thomas Cook.

A: Of course we don't specify on any company specific things but if you see the overall opportunity of this and we had earlier listing also in the similar line of business and the kind of valuation at that company which it is quoting at and the entire opportunity size is looking very interesting, that is first piece. Secondly, the most important thing which we look when we are picking up this kind of a bottom up stock where the capital allocation is going to give you a kind of a decent RoE going forward and if that confidence is there the multiple will get adjusted to that extent. So, these are the two bright points which we see in these kind of names. Hence we are owning some of these names.

Anuj: I believe you have some high conviction bets in the pharma space as well. Do you get a sense that this sector has now bottomed out?

A: If you see the pharmaceutical space in the last almost two years there were lot of issues related to US Food and Drug Administration (FDA) and almost all the companies in India have got some problems as far as their plant observations were concerned from the US FDA. And that is one of the reasons why the entire pharma sector, maybe around two months back was underperforming the broader markets also. But if you see the last 2.5-3 months pharma as a space has in fact outperformed broader market by almost 7-8 percent and that is what the confidence shows.

Second thing is of course we have to take a view whether the entire pharmaceutical opportunity which is available to the Indian market and the Indian companies is going to be there, specifically coming from the US side. And if you see the broader number today maybe we are exporting close to USD 15 billion kind of pharma exports as compared to maybe USD 80-85 billion on the software side or IT side. So, there is a tremendous opportunity available here and if you see the penetration also the market share from the Indian generic side in the global markets also it is roughly around 33 percent and there also there is a huge scope for the improvement. And lastly of course which sectors or which segments of therapies which you are promising on and betting on that also will be very crucial. So, it is a combination of all these three. I am reasonably bullish as far as the pharmaceutical phase is concerned.

Sonia: Wanted to get your view overall on the earnings season, the hope is that in Q1 there would be bottoming out of the downgrade cycle. Would you believe that as well and what is your estimate for this quarter?

A: Instead of maybe commenting on immediate quarter the most important thing which we should all concentrate on whether on a two year horizon basis we will get kind of a 13-15 percent kind of earnings growth or not. And of course the base of the last two years as we all know the Nifty as earnings wise has grown almost flat and on that base if I grow around 13-14 percent in the next two years combined per annum we are talking about a market valuation at around 16-16.5 times on FY18 earnings. So, that gives me a kind of a confidence. Because 16-16.5 times for all the parameters with the looking of eight year low of the RoE of India there is a reasonable scope for markets to get higher Price-to-Earnings Ratio (PE) multiple. But at the same time are we very cheap, definitely not. I would love to get the markets at around 13-14 percent kind of PE on two year or one year forward. But that is not the case right now. So, we are at somewhere near neutral zone. Coming back to your question on the coming quarter it will be a mixed bag. There will be some positive and some negative surprises from the individual sectors and put together we should get around close to around 3-5 percent kind of earnings growth. 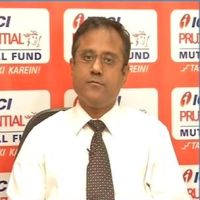