Deutsche Bank sees 10% Nifty rise in 2018, political instability as only risk to market

The Nifty had rallied 29 percent in the previous year, but equity returns in 2018 will not be as good as 2017, Pratik Gupta, Head of Equities, Deutsche Bank India said in an interview to CNBC-TV18.

He is not worried for market due to recent correction of 5-6 percent driven largely by rising US bond yield, which he thinks was actually was good. The market will see such correction intermittently going ahead.

Underlying corporate earnings recovery not only looks robust in India but also globally, and he is still constructive on equities saying it will continue to be the preferred asset class in current year.

PNB fraud case seems to have been contained within a few banks and the RBI also talked about injecting liquidity which is positive, but it raised concern w.r.t risk management system which has to be strengthened, he said. 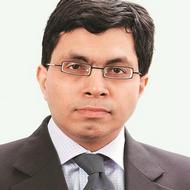 Credit markets are more vulnerable, but equity markets continued to rise despite rising bond yield. Hence one should not be worried as long as globally earnings growth seeing recovery and interest rates are not rising very fast. "One should not be worried if US bond yields rise another 20-30 basis points, but the most worrisome part would be if dollar strengthens by 2-5 percent."

He feels political instability is the only risk that could spook markets in India. Economy is coming out of slow industrial growth and next financial year there would be no major disruption reform like GST, demonetisation, two droughts two-year ago etc.

Rural consumption story, which was somewhat dipressed in last one-two years, is seeing some pick-up. "After conversation with companies, we are seeing some pick up in demand and that is where earnings growth surprises will come through."

Some consumption companies may see 30-40 percent earnings growth going ahead, according to him.

In metals, he likes steel companies in particular due stronger demand, operating leverage and import duty protection. "Only risk we see for steel companies is stressed steel assets sale, wherein if someone overpays for the deal that risk would be watched. But otherwise, cash flow is improving and leverage is coming down, so quite positive on steel companies."

As syncronised global recovery is coming, he is construtive on auto ancillary space.

He said cement sector is a good way of playing the Indian infrastructure theme.

"Cement has been one of the favoured sectors for last couple of years and that is continued in this year as well. Although in near term, pricing pick up may not happen but volume may go up due to rural infrastructure build up, affordable housing projects. So all in all, as a part of infrastructure them, cement stocks will do well," he explained.