Despite the rut in broader markets, these 7 mid & smallcaps turned multibaggers

Overall the loss in broader markets curtailed sharply especially after the government took initiatives to bring back slowing economy on track and also the global cues turned favourable.

After hefty returns in 2017, the broader markets continued to reel under selling pressure for two consecutive years, underperforming benchmark indices by a wide margin especially due to valuation concerns.

The underperformance seen in broader markets does not mean that all stocks were caught in a bear trap, but advance:decline ratio was largely in favour of bears.

In fact, more than 130 stocks among BSE500 index closed in the green in those two years, and the rally seen in 20 percent stocks was majorly due to their quality of earnings, corporate governance, low/nil debt burden etc.

Moreover, among those gainers, top seven stocks generated multibagger returns in two years, when the broader markets were down. 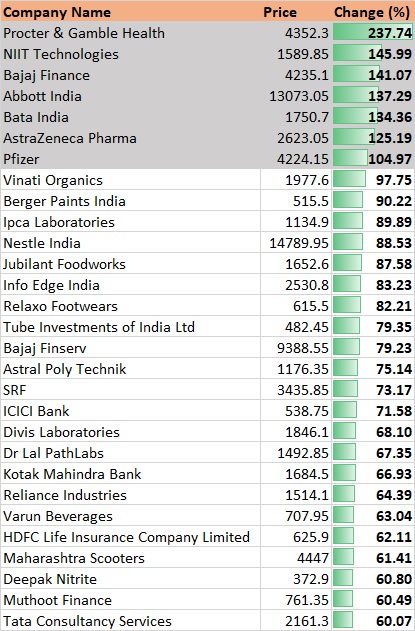 Note: The abovementioned stocks are not recommendations.

Overall the loss in broader markets curtailed sharply especially after the government took initiatives to bring back slowing economy on track and also the global cues turned favourable.

The sharp cut in corporate rate tax rate was the major decision by the government in the current decade, followed by several measures related to auto, real estate, exports, along with repo rate cut by Reserve Bank of India. Fiscal stimulus by major global banks, the signing of phase one trade deal by US-China and stable oil prices also led major support to Indian equities in the last three-and-half-month of 2019.

Experts expect the coming years to be of broader markets as the measures taken by the government will start reflecting in earnings and economic growth.

"Going forward, it is widely expected that the Indian economy has bottomed out and the positive effects of the economic turnaround would lead to healthy broad-based rally and the beaten-down stocks in all spaces especially in the midcap and smallcap domain will be in a position to generate healthy returns," Rahul Agarwal said.

From an overall valuation perspective, the benchmarks are trading at a premium and in coming days, value hunting would lead to superlative stocks with strong management, simpler business models and consistent earnings growth outperforming the overall markets, he added.

Investors with some risk-appetite and a penchant to stay invested for longer term would be well served if they are able to pick fundamentally sound stocks in the midcap and smallcap space, he advised.

UBS Securities believes the policy bias is changing from repair over the past few years (GST, anti-corruption agenda, banking system clean-up) to growth.

"The repair policy measures were disruptive to near-term growth, in our view. The changed policy bias is borne out by the focus on recent reforms, such as corporate rate cut, labour reforms and a privatisation push. These reforms and proposed ones would support growth near term," the brokerage said.