Investors who bought stocks when the whole world was selling are now a happy lot, with their wealth increasing by Rs 30 lakh crore since November 8, 2016.

Who says buying out of fear is a bad idea? History is full of evidence that investors who have created enormous wealth after making purchases when fear gripped the markets.

The latest fear to grip markets was demonetisation which came as a surprise to not just equity markets but to the common man as well after Prime Minister Narendra Modi made the surprise announcement on November 8, 2016.

The market tumbled in November 2016 soon after the government announced the surgical strike on black money, but slowdown in consumption fuelled fears of a fall in economic growth and pulled markets lower.

The initial dip in the market was quickly bought as market witnessed a rebound the very next month (December 2016). The S&P BSE Sensex retested 25700 level again in December but then witnessed a sharp bounce back which took the index above Mount 33K.

Investors who bought stocks when the whole world was selling Indian markets, including foreign investors (FPIs), are now a happy lot. The S&P BSE Sensex has risen over 22 percent and investors’ wealth has increased by Rs 30 lakh crore since November 8, 2016.

As many as 36 stocks from the S&P BSE 500 index more than doubled investors’ wealth up to 1000 percent in the last one year.

Stocks which outperformed benchmark indices in the last one year include names like Indiabulls Ventures which rose over 100 percent, followed by Rain Industries which gained 519 percent, and Avanti Feeds rallied 453 percent in the same period. 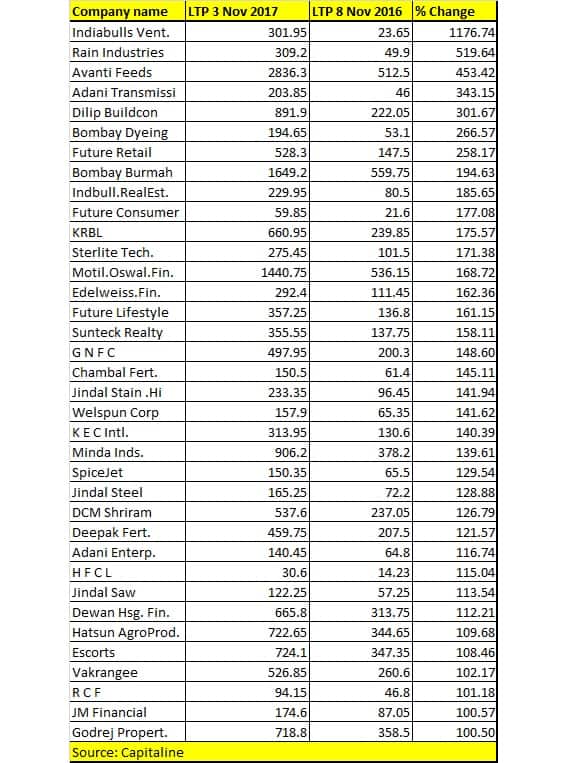 On the sectoral front, the S&P BSE Realty Index rose 60 percent, followed by the S&P BSE Consumer Durable index which gained 50 percent, and the S&P BSE Energy and Telecom index rallied 48 percent respectively in the last one year.

What was once considered to be a doomsday by most Indian and global economists as well as analysts turned out to be a golden opportunity for retail investors. Demonetisation pushed financial savings from households into equity markets via mutual fund route.

The assets under management rose over Rs 20 lakh crore in September and equity MFs' assets tripled in April-October.

In September, these funds saw inflows of Rs 27,077 crore. For the first seven months of the current financial year, cumulative inflows into these funds have tripled to Rs 1.51 lakh crore as compared to Rs 46,840 crore in the same period of the previous year.

Watch | One Year Of Demonetisation - A Look Back At The Timeline

What has been changed post demonetisation is very interesting from the Indian Equity Market’s perspective. Even after a significant fall in foreign institutional inflows (FII) the market didn’t slip.

Foreign portfolio investors pulled out over Rs 30,000 crore in the month of November and December from India equity markets while domestic investors acted as a shield and prevented free fall in markets.

“The downpour of Domestic Institutional inflows was enough to keep up the turgidity of the index, which blatantly asserts that Indian markets have abandoned FII crutches. Statistically, there is a clear visibility of change in DIIs trend, where there were around net Rs 23,000 crore of inflows from Nov-15 to Oct-16, an inundation of 1 lakh crore was observed by them post DeMo till the month gone by,” Sunil Nyati, MD, Swastika Investmart told Moneycontrol.

“Contemporary to this FIIs were the net seller by around Rs 55,000 crore. However, the market was indifferent to this & escalated to new heights with more than 25 percent of return during this period,” he said.

Nyati is of the view that if we check the headline index then we can say that there is more than 25 percent rally in the market but last year was attributed to Midcap and Smallcap stocks where the market has a long list of many stocks which have become multibaggers in the last one year.