DATA STORY: As the price of Bitcoin soared, its dominance in the market plummeted by 57% in 2017

The story of the meteoric rise in Bitcoin's valuation was punctuated by a steep decline in its dominance. This coincided with the rise of Ether, Ripple and Bitcoin Cash. Moneycontrol presents an analysis of the trend

CoinSwitch Kuber | Apart from a plethora of facilities it provides to customers similar to other crypto exchanges, CoinSwitch Kuber allows users to buy cryptocurrencies with a credit card at an effective price. Funded by Sequoia Capital, the exchange allows users to access the pooled liquidity of the leading exchanges in India to get the best rate and trade instantaneously.

In the process, on December 17, Bitcoin touched a record exchange price of USD 20,089 and the corresponding market capitalisation of USD 326 billion, also the highest ever in its short but volatile nine years of existence.

However, with the unprecedented surge, 2017 was also marked by a steep decline in the dominance of Bitcoin in the cryptocurrency market cap.

The dominance of Bitcoin, i.e., the share of Bitcoin’s market cap in the total market cap of cryptocurrency market, was 87 percent at the beginning of the year, which came down to 38 percent on December 31. It has further reduced to 33 percent on Thursday thanks to a late bearish trend in the market. The graph shows ups and lows of Bitcoin in 2017 in terms of price, market cap and 24-hour trade volume. Source: CoinMarketCap 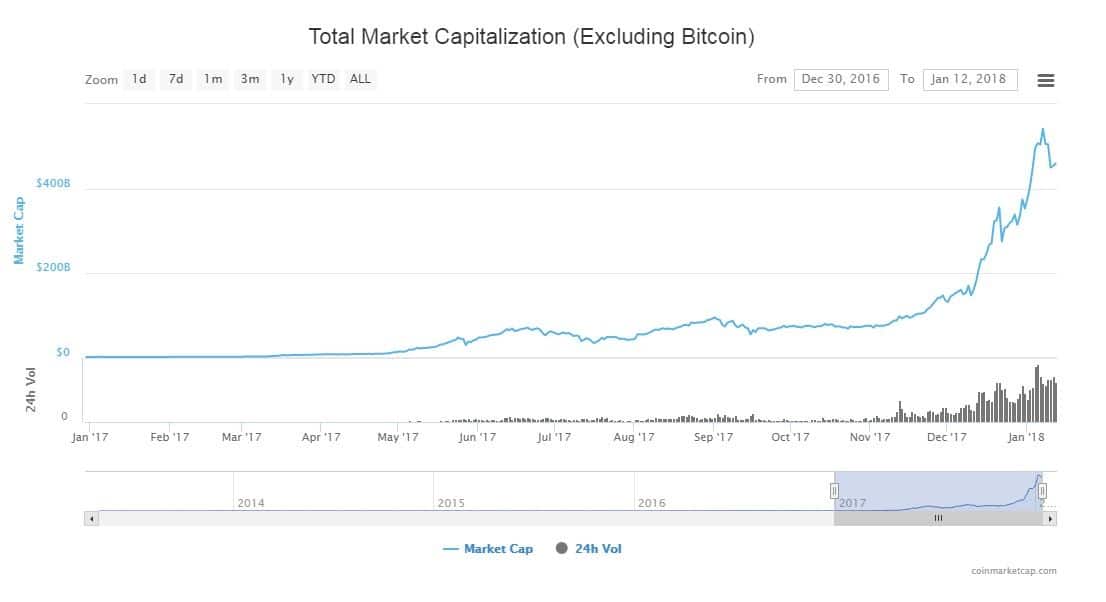 The graph shows the growth of combined market capitalisation and 24-hour trade volume of all cryptocurrencies excluding Bitcoin in 2017. Source: CoinMarketCap

Data shows, on January 1, 2017, the total market cap of cryptocurrencies excluding Bitcoin was mere USD 2 billion which zoomed to USD 348 billion by the end of the year.

A look at the graph picturing the dominance of major cryptocurrencies (below) shows that the decline of Bitcoin’s dominance coincides with the rise in the share of Ethereum and Bitcoin Cash till mid-2017. After that, Bitcoin regained some of its lost space in the second half of 2017 till mid-December before another decline started.

On the other hand, the second half of the year also marks the decline in the dominance of other major currencies including Ether, Bitcoin Cash, Ripple, Litecoin, and others. At the end of the year, no currency other than Bitcoin had a share more than 15 percent of the total market cap of all cryptocurrencies. The graph represents share or dominance of major cryptocurrencies in the global market cap of cryptocurrency market. Source: CoinMarketCap

The trends observed above can be explained by mainly two phenomena which disturbed the cryptocurrency market in 2017. (Though there could be other factors as well, like increased transaction cost for Bitcoins.)

Another look at graphs and it can be inferred that the 24-hour trade volume for all cryptocurrencies saw a significant surge in November and December, however, we will focus especially on currencies other than Bitcoin.

The 24-hour trade volume which rarely touched more than USD 2 billion combined for all currencies excluding Bitcoin soared regularly above USD 20 billion in the latter half of December. (On January 4, it also crossed USD 40 billion barrier.)

Though, fact remains that Bitcoin is the most traded currency in the market as the daily trade volume for Satoshi Nakamoto’s brainchild remains above USD 10 billion on regular basis, intermittently also crossing USD 20 billion. However, one cannot deny that currencies other than Bitcoin have generated increasing interest from the investors. They are now more confident of betting on newer currencies than ever.

Also Read: Energy consumed by bitcoin miners around the world is more than over 150 countries

This brings to another phenomenon of the year, the increased incidence of initial coin offerings or ICOs.

As per stats provided by CoinSchedule, which tracks ICOs, there were in total 235 coin offerings in 2017 which raised over USD 3.7 billion for their promoters. September was the most fruitful year with investors betting more than USD 800 million on ICOs. Comparatively, 2016 saw just 46 ICOs which had raised mere USD 96 million.

The increased number of ICOs meant that there were a greater number of options for the investors, which again was detrimental to the monopoly of Bitcoin in the cryptocurrency market. And, what is more, a slew of ICOs including camera maker Kodak's KODAKCoin are listed to open in 2018.

Note: Unlike the listed companies which release a fixed number of stocks for trading, fiat currencies don't have market-cap as there is no ceiling on their possible number. However, in case of cryptocurrencies, more often than not, the number or 'volume' of currencies is fixed (for example, 21 million for Bitcoin), very much like stocks. This difference and/or similarity allows us to calculate market-cap of cryptocurrencies.

For the analysis above, the market caps have been calculated by multiplying price to the circulating supply, akin to the free float method used for listed companies.
Shubham Raj
Tags: #bitcoin #Business #cryptocurrencies #markets
first published: Jan 12, 2018 04:34 pm