Dalal Street Week Ahead: Here are 10 key things that will keep traders busy next week

The market turned buoyant with the benchmark indices registering gains throughout last week which ended on November 6, backed majorly by the heavyweight sector - banking & financials.

Experts largely feel given the optimistic momentum and positive global cues, the market can make a fresh record high in the coming week but the sustainability of those levels is highly unlikely as currently indices are at overbought position.

"The momentum can take Indian market to a new zone, over-weighing worries over increasing COVID cases, backed by a strong performance in sectors like banking, IT, Pharma and exporters. We expect this momentum to sustain aided by positive Q2 results, favourable economic data, strong FII buying and expectations of an additional stimulus package," Vinod Nair, Head of Research at Geojit Financial Services told Moneycontrol.

The Nifty Bank index surged 12 percent and Financial Service gained 11 percent, while the broader markets underperformed benchmark indices and the underperformance in Smallcap was high. The Nifty Midcap index was up 4.3 percent and Smallcap index gained 0.7 percent during the week.

Here are 10 key things that will keep traders busy next week:

As we are in the last week of quarterly earnings season, around 2,600 companies will declare their September quarter results in the week ended November 14 including most of them are midcaps and smallcaps.

Industrial production for September and inflation for October will be released on Thursday, while foreign exchange reserves for week ended November 6, which remained at record high levels, will be announced on Friday.

Experts largely expect further improvement in industrial production given the easing lockdown across India, though the numbers may remain in negative terrain, while the inflation may remain elevated at over 7 percent for previous month.

"We expect trade & manufacturing to improve as the current economy is normalising while inflation is expected to remain above target levels," Vinod Nair, Head of Research at Geojit Financial Services told Moneycontrol.

Joe Biden is set to become the 46th president of the United States. Democrat Party candidate Biden has defeated incumbent Republican US President Donald Trump in the closely-fought presidential election.

Senator Kamala Harris, who is of Indian origin, has become the first-ever woman vice president-elect of the United States.

Analysts believe Biden’s victory is most likely to be a favourable outcome for markets as it will instil confidence amongst investors by reducing policy uncertainty.

The rising recovery rate week-after-week in India is expected to continue to support the market, though US and Europe have been facing second wave of virus.

India reported more than 85 lakh confirmed cases with over 1.26 lakh deaths but the recovered cases are over 74.6 lakh and active cases are around 5.2 lakh compared to over 6 lakh last week.

After the end of third and final phase of Bihar election on November 7, the results will be declared on November 10, i.e. Tuesday.

The market will closely watch results as exit polls indicated that the Tejashwi Yadav-led Mahagathbandhan could get a majority in the Bihar election with maximum 191 seats, while the Chief Minister Nitish Kumar-led National Democratic Alliance (NDA) may get maximum 91 seats.

The FII inflow clearly pushed the benchmark indices near record-high levels and experts feel the flow is expected to continue in emerging markets including India given the likely liquidity push from central banks to revive economy.

FIIs net bought Rs 13,399.41 crore worth of shares in the first week of November against Rs 14,537.40 crore of buying in October, though DIIs took the advantage of market rally to book some profits at higher levels as they net sold Rs 6,789.86 crore in November.

The Rs 6,480-crore initial public offering of Gland Pharma will open for subscription in the next week on November 9 and the same will close on November 11.

The issue consists a fresh issue of Rs 1,250 crore and an offer for sale of over 3.48 crore shares by promoters and others.

The Nifty50 gained over a percent on Friday and more than 5 percent during the week, and formed bullish candle on the daily as well as weekly charts, reaching near record-high levels.

Hence, experts feel the momentum may take the Nifty50 to record high levels but the upside seems to be limited to 12,500 given the overbought position.

"After four weeks of indecisiveness, Nifty formed a tall bullish candle this week, closing well above the high of each of the past four weeks. Going one period lower to the daily time frame, the index has broken out of a Bullish Flag pattern along with a Breakaway Gap. All these factors indicate that the index is well-positioned to move higher in the days ahead, possibly to new highs," Abhishek Chinchalkar, CMT Charterholder and Head of Education, FYERS told Moneycontrol.

Support for the index is now placed at 11,930, he said, adding Bank Nifty has been trading within a rising channel over the past 6-months and is now approaching the upper end of this channel, which is placed around 27,050.

If the index sustains above that, the rally can be extended further in the near-term, according to him.

A fresh addition was seen in 12,500 strike which also holds the maximum open interest and also likely to act as an immediate hurdle.

Hence, "if Nifty breaks above 12,500 then we can expect a further short-covering move towards 12,700 levels. So the overall option data indicates Nifty to oscillate in the range of 12,000 –12,500 in the coming week," Nilesh Jain of Anand Rathi told Moneycontrol.

The overall fall in the volatility is also giving comforts to the bulls and further drop will pull the index higher, he said.

The volatility index measured by India VIX, fell sharply by 17 percent this week to end below 21 levels. 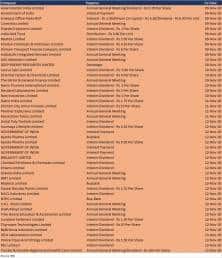