Dalal Street Week Ahead: Here are 10 key things that will keep traders busy next week

Experts feel the consolidation is expected to continue in the coming week as well, though, vaccine progress and FII flow may remain supportive and advised buying on any major dip.

The market retained its uptrend for the third consecutive session, but the bulls' strength reduced considerably in the week ended November 20 compared to the previous two weeks. The benchmark indices turned volatile after hitting fresh record high levels as the market was looking for triggers in the later part of the week.

The BSE Sensex rose 244.27 points to 43,882.25, and the Nifty50 gained 78.80 points at 12,859.05 after surging 10 percent in the previous two weeks. The indices were supported by consistent FII liquidity and strong developments on the vaccine front, but the rising COVID-19 cases across the globe capped upside.

Experts feel the consolidation is expected to continue in the coming week as well, though, vaccine progress and FII flow may remain supportive and advised buying on any major dip.

The real action was in broader markets last week as the Nifty Midcap index climbed 2.8 percent and Smallcap gained 1.5 percent.

"We expect volatility to remain high next week, thanks to the scheduled F&O expiry of November month contracts. In the absence of any major event, COVID-related updates and global cues will remain in focus," Ajit Mishra, VP - Research at Religare Broking told Moneycontrol.

He advises traders to focus on the selection of stocks while maintaining the buy on dips approach.

Here are 10 key things that will keep traders busy next week:

The market looked worried about a spike in virus cases in key states like Maharashtra, Delhi, Kerala, Madhya Pradesh, Gujarat, West Bengal etc. and as a result, there have been some restrictions in some states, but the consistent rising recovery rate continued to act as a sigh of relief.

The recovery rate increased to 93.7 percent now, compared to 93 percent in the previous week, while the fatality rate remained at around 1.47 percent, which is the lowest among the most affected countries. Total infections count crossed 90 lakh mark with 1.33 lakh deaths, but the recovered patients' count was over 85 lakh now and the active cases were around 4.4 lakh, as per Johns Hopkins University.

The consistent positive news from leading pharma companies with respect to vaccine progress is expected to act as a relief and raised hopes for an early launch of the final vaccine to control COVID-19. However, to get the vaccine to everyone in the world may take some more time.

First, Pfizer reported that its COVID-19 vaccine showed a 95 percent success rate and as a result, the company and its German partner BioNTech SE are seeking for an emergency approval from the United States, while Moderna also claimed that its vaccine is 94.5 percent effective. Reports indicated that Russia's Sputnik V vaccine also showed 92 percent effective, while AstraZeneca-Oxford is also expected to release their late state data in the coming weeks.

India's Bharat Biotech International is also going to conduct Phase-III trials of its vaccine in the country soon.

The big driver behind the Indian equity rally was the liquidity as experts feel India is the only economy which showed strong signs of recovery when the world is still majorly facing COVID-19 crisis.

On the contrary, DIIs and mutual funds took the advantage of rally and continued with their profit booking strategy as they might turn cautious given the 70 percent upside in benchmark indices from March 23's low. DIIs net sold over Rs 32,600 crore in November alone, which seems to be the highest ever selling in a month.

Experts expect the FII inflow to continue in coming months, but still, the key thing to watch out for would be whether the pace of inflow may continue or may slow down.

The Indian rupee strengthened in the week gone by, gaining 45 paise during the week to close at 74.15 against the US dollar due to strong FII inflow and amid volatility in greenback due to rising coronavirus infections and positive developments on the vaccine front.

"With fiscal stimulus plans remaining uncertain, speculation is growing that the Federal Reserve may further loosen monetary policy in

December. Therefore, we expect the rupee to trade in the range of 74.00-74.80 for the coming week as a rebound in the dollar index is expected to support the pair. However, a rally in domestic equities may cap further gains," ICICI Direct said.

Banking & financials could be in focus in the coming week, especially after the RBI panel recommended several changes in the banking industry which could transform the segment in a big way.

The panel suggested proposals to raise promoters cap to 26 percent from current 15 percent in 15-year period and to allow large corporate houses as promoters of banks or take a significant stake in banks.

The foreign exchange reserves for the week ended November 20 will be released on Friday.

The consistent rise in forex reserves has been making India stronger and experts feel in fact that may help the government announce further stimulus packages.

The Nifty50 gained 0.7 percent on Friday and formed small-bodied bullish candle which resembles Hammerpattern on the daily charts, while in the week, the index gained 0.6 percent but formed a bearish candle on the weekly scale as closing was lower than opening levels.

The formation of the bearish candle on weekly charts was due to some profit-booking from the higher levels, but the index continued to make a higher top and higher bottom formation on the daily chart.

Hence, experts feel the consolidation may continue in coming days but the overall momentum can take the Nifty to 13,000 mark.

"Though the index is facing multiple resistance levels in the 13,000 to 13,050 range and profit-booking at higher levels might not be ruled out but, the bullish trend will remain intact until the level of 12,721 holds on the lower side. The medium-term rising trend line formed by joining the highs of August 28, 2018, and January 20, 2020, is likely to act as resistance at the 12,970 levels," Manish Srivastava of Rudra Shares & Stock Brokers told Moneycontrol.

The major reason for expected consolidation and volatility is the expiry of November futures & options contracts and rollover of positions to next month on coming Thursday.

The options data indicates that a fresh Put writing was seen at 12,800, 12,700, and 12,600 strikes where the second-highest open interest was placed at 12,800 strike and that is likely to provide immediate support.

The derivative setup indicates that the coming week is likely to be more volatile and Nifty may oscillate in a broader range of 12,600-13,000, experts feel.

"If Nifty is unable to sustain above 12,800 then some selling pressure towards 12,600 can't be ruled out," said Nilesh Ramesh Jain of Anand Rathi Shares and Stock Brokers.

"A continuous Call writing was seen at 13,000 strike which also holds the highest open interest of nearly 36 lakh contracts. So, If Nifty breaks above 13,000 then we can expect a strong short-covering move towards 13,200 levels," he added. 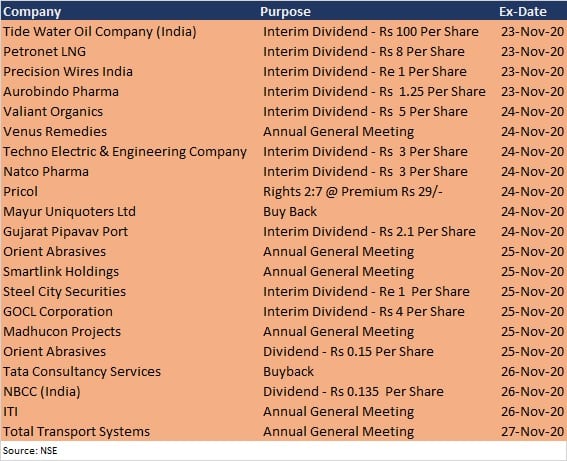