Dalal Street Week Ahead: Here are 10 key factors that will keep traders busy this week

The market staged a strong performance in the week ended August 28 with the benchmark indices climbing over six-month high, majorly backed by FII money, strong global sentiment especially after US Federal Reserve reiterated its dovish stance and rising hope for sooner availability of vaccine. Banking & financials, which were laggards for more than a month, led this rally.

Experts expect the trend largely to remain in favour of bulls till we are getting FII money and positive global sentiment, though there could be some consolidation given the rally in benchmark as well as broader markets.

The Nifty Midcap and Smallcap indices continued to trade in line with frontliners, rising 2.3 percent and 3.7 percent respectively.

"Market is expected to continue the momentum. Barring, valuation concerns, the positive commentary and earnings upgrades of the results season has boosted the attractiveness of some stocks. There could be a slight consolidation in the markets, when profit booking emerges, but it is not likely to be a long drawn out correction," Vinod Nair, Head of Research at Geojit Financial Services told Moneycontrol.

On August 31, the market will first react to Reliance Industries' announcement to acquire retail & wholesale business and the logistics & warehousing business of the Future Group for Rs 24,713 crore.

Automobile as well as auto ancillary stocks would remain in focus as August sales data will be released on first of September. Analysts largely expect good demand for tractors to continue given above normal monsoon and better rural growth, while two-wheelers and passenger vehicles sales are expected to improve further on sequential as well as YoY basis amid low inventory and normalising production, with better demand (including festive-led) from rural and semi-urban areas given the safety and unlock measures by government. However, commercial vehicle sales may continue to be weak given the excess capacity, though there has been some improvement in demand from construction companies.

The Central Statistical Organization will release Q1FY21 GDP data, which measures the final value of finished goods and services within the country, on August 31. Experts largely expect contraction in double digits given the slow economic recovery due to COVID-led lockdown.

"We expect India's April-June period GDP data to confirm that COVID-19 containment measures have dealt an unprecedented blow to the economy, with almost all economic activity grinding to a halt as the country went into a stringent lockdown on March 26, only to emerge from June onwards," Barclays explained.

Among other economic data points, Fiscal Deficit and Infrastructure Output for July will be released on same day, while Markit Manufacturing PMI and Services PMI for August will be announced on Tuesday and Thursday respectively. Foreign exchange reserves for the week ended August 28 will be released on Friday.

More than 300 companies will release their quarterly earnings report card in the coming week and majority of them would announce April-June quarter results.

For the first time, India crossed the mark of 70,000 infections a day in the week gone by and reported 77,266 cases on August 28, taking the total to 34.6 lakh so far, with 62,550 deaths, as per Johns Hopkins University data. The increase in test count on daily basis also could be a reason for higher infections each day, experts feel. India conducts 8-10 lakh tests each day now.

But the good thing is remained that the government's 'test, track and treat' approach played a crucial role as the recovery rate increased to 76.58 on Friday (against around 75 percent last week) and even the fatality rate improved to 1.80 percent from over 1.85 percent last week.

The progress in COVID-19 vaccine has been one of supporting factors for the market for last couple of months. Globally six (including University of Oxford/Astrazeneca, Sinopharm) out of around 170 vaccine candidates are in final stages, i.e. Phase-III where the trial takes place in more than 1,000 patients, while in India, two vaccine candidates (Bharat Biotech and Zydus Cadila) are in Phase 2 of clinical trials.

FII/FPI remained at the forefront in a rally seen from March lows as NSDL data indicated that FPI net investments into equity, as a whole, have been around Rs 45,000 crore in August which has been the higest monthly inflow at least in last two decades.

In last trading week, they have net bought more than Rs 5,000 crore worth of shares. However, DIIs remained net sellers as they could be taking the opportunity to book profits at higher market levels. DIIs net sold over Rs 11,700 crore of shares in August so far including Rs 2,600 crore of selling in the passing week.

The Indian rupee strengthened sharply in last six trading sessions from 75 levels against the US dollar on August 20 to around 73.40 on August 28, backed by consistent FII inflow and weakness in dollar index. Experts expect the currency to strengthen more in coming days unless and until the RBI intervention comes.

"Some kind of rupee appreciation was largely due, given the weakness in the dollar index and a risk-on sentiment globally as the economic activity is gradually picking up," Sugandha Sachdeva VP-Metals, Energy & Currency Research at Religare Broking told Moneycontrol.

"We are expecting the rupee to test levels of 72.80 in the immediate near term, if this scenario persists. The RBI would probably look to intervene in the forwards market for the time being," she said.

The Nifty50 gained 0.76 percent on Friday and 2.43 percent during the week, forming bullish candlestick pattern on daily and weekly charts respectively, indicating the trend is in favour of bulls. The trend can push the index towards psychological 12,000 mark, but given the stellar rally, experts expect some consolidation in coming few days before marching further upwards.

"Majority of the oscillators are in overbought zone and sideways movement to cool off cannot be ruled out. However, it can be a healthy sign and one should opt for buy on dip strategy as long as Nifty is trading above 11,280 levels where crucial support of the ascending trend line is lies," he added.

The options data also indicated that there has been a shift in trading range on the higher side with 12,000 strike having a maximum Call open interest of 21.97 lakh contracts, which could act as crucial resistance, while the strong support remained at 11,000 as 11,000 strike accumulated 27.17 lakh contracts followed by 11,500 strike which holds 21.54 lakh contracts.

"Considering the sharp decline in volatility from 25 percent to 19 percent in the August series, we believe the highest Put base at the 11,500 strike should work as an important support for the Nifty. Moreover, Nifty futures premium has risen to 25 points, which is one of the highest seen in the last many series. Thus, positive bias should remain intact till the Nifty holds above 11,500," Amit Gupta of ICICI Securities said. 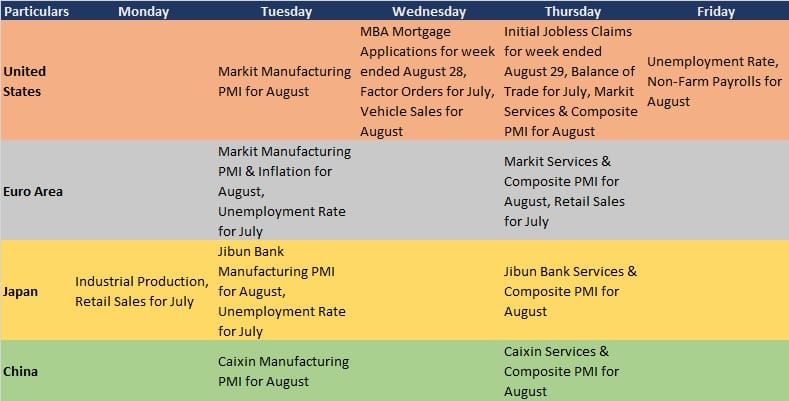