Equity benchmarks, as well as the broader markets, recouped all the previous week's losses in the week ended October 23 as bulls were back in action. Easing coronavirus risk, better September quarter earnings scorecard, rising industrial and commercial activities, FII inflow and hope of revival of auto demand boosted sentiment.

Experts feel the positive mood of the market could continue amid September quarter earnings and improving economic activity, but the US presidential elections ahead may bring some volatility in the global markets.

"Going ahead, Mr Market is expected to continue its upbeat mood as indices are oscillating around their all-time highs. India Inc with its quarterly performance has managed to keep the markets afloat and on lack of any negative news, indices are likely to inch higher," Nirali Shah, Senior Research Analyst at Samco Securities told Moneycontrol.

Investors are advised to wait and watch and buy on healthy declines, she said.

On coming Monday, the market will first react to Yes Bank, Nestle India and Tech Mahindra's quarterly earnings, though these stocks do not have major weightage in the benchmark indices.

Here are 10 key factors that will traders busy next week:

September quarter earnings season will remain a key to watch out for in the coming three weeks. More than 300 companies will declare their quarterly earnings next week.

HDFC Bank is expected to be in focus next week as Sashidhar Jagdishan will take over the responsibility of the country's largest private sector lender on October 27. Aditya Puri, who led the Mumbai-headquartered bank for 25 years as Managing Director and Chief Executive Officer, is set to retire on October 26.

Sashidhar Jagdishan has been appointed as an Additional Director and as the Managing Director and Chief Executive Officer of the bank for three years, after the RBI approval in August.

The risk of coronavirus cases has been declining week-after-week, which provided strong support to the market, especially when there is an increase in industrial and commercial activities amid unlock. The active COVID-19 cases fell below 7 lakh mark for the first time in nearly two months and the recovered cases are 10 times (i.e. over 70 lakh cases) higher over active cases now. The total confirmed infections were more than 78.5 lakh with over 1.18 lakh deaths, as per data by Johns Hopkins University.

The recovery rate was around 90 percent on Friday against 88 percent last week, while the fatality rate remained around 1.5 percent, the lowest among the most impacted countries.

Union Health Minister Harsh Vardhan on Friday said the next three months are going to be decisive in determining the coronavirus situation in the country as he urged people to follow COVID-19-appropriate behaviour in the coming festival season and winter months.

On the vaccine front, the report indicated that Bharat Biotech's Covaxin has received approval for Phase III clinical trials, which renewed hopes for a vaccine.

But the spike in cases in the United States and some European nations raised worries over global growth, hence, it will be closely watched in the coming week. The United States recorded the highest single-day rise in COVID-19 infections on Friday (over 85,000) since the pandemic began.

On the other side, last week the US Food and Drug Administration approved Gilead's antiviral drug Remdesivir for treating hospitalised COVID-19 patients.

The US presidential elections, which is scheduled to be held on November 3, would be a key factor to watch out for globally and there could be a bit of volatility in the markets.

Given the sudden increase in COVID-19 cases in the US, which hit at a record rise in a single day on Friday, and the fight between both parties (Democrats: Joe Biden and Republicans: Donald Trump) over second stimulus package along with current economic situation would be key points for discussion ahead of elections. Reports indicated that Democratic party if it comes in the power, is expected to announce the bigger stimulus package which has been in the discussion but not yet passed may be due to the elections.

Foreign Exchange Reserves for the week ended October 23, and infrastructure output and fiscal deficit data for September will be released on Friday.

India's foreign exchange reserves hit the lifetime high at $555.12 billion in the week ended October 16, increasing by $3.615 billion, against $551.505 billion seen in the previous week ended October 9, due to sharp rise in foreign currency assets.

"Foreign exchange reserves soared on account of current account surplus and a steady flow of portfolio inflows. It is quite startling to witness India’s forex reserve double itself from $275 billion back in 2013, which by most standards is considered adequate. Case in point being, the sturdy state of our Indian economy when compared to developed countries where demand revival is quite slow with a resurgence in COVID cases," Nirali Shah of Samco Securities.

The Nifty50 gained 34 points on Friday and formed a small-bodied bearish candle on the daily charts as closing was lower than opening levels, while it gained 1.4 percent during the week and witnessed a small-bodied bullish candle which also resembles a Spinning Top kind of formation on the weekly scale which indicates indecisiveness amongst participants.

The Nifty index faced stiff resistance at 12,000 mark and made multiple attempts to surpass the same but failed to do so.

"We reiterate that 12,000 is an extension of the rising trend line which acted as a supply zone for the markets in the past couple of weeks and going forward only a close above 12,000 would bring the bulls back in action and that could propel the index towards life high. On the contrary, a breach of 11,800 level might intensify the panic in the markets which can drag the index towards 11,600 levels," said Nilesh Jain of Anand Rathi.

The October futures and options contracts will be expired and the positions will be rolled over to next month on coming Thursday, which could lead the volatility in the coming week. The options data indicates that a Put writing was seen at 11,700, 11,800, and 11,900 strikes where the highest open interest is still placed at 10,500 strike and the second-highest open interest is placed at 11,500 strike.

So, the overall option data indicates that the coming week is likely to be more volatile (also due to US presidential elections), while Nifty may oscillate in a broader range of 11,700-12,200, experts feel. 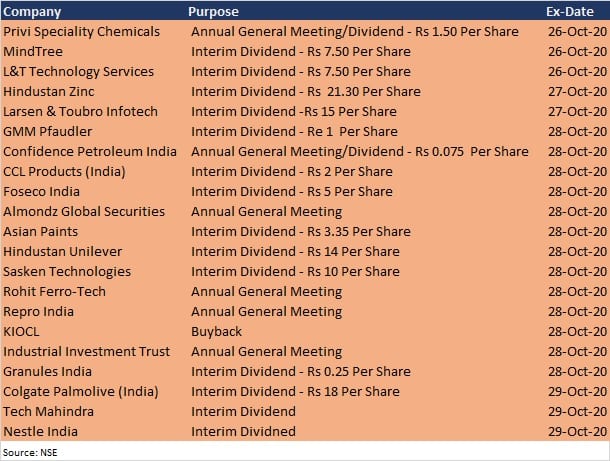