Bulls after taking a breather for a week came back in action again. Equity benchmarks climbed over a percent in the week ended August 7 despite increasing coronavirus infections and weak economic activity, as supported by positive global cues and additional measures for stressed sectors by RBI.

All sectors, barring IT, participated in weekly gains while the major action was seen in broader markets as the Nifty Midcap index gained 4 percent and Smallcap rallied 5 percent.

The market valuations look stretched and any increase in US-China tensions or India-China border issue may hit bulls, but given the expected growth after couple of quarters, the current rally seems justified, and also having the humongous liquidity availability globally, the momentum may remain backed by bulls along with continuation in earnings-led stock specific action, experts feel.

"We're mirroring global markets and indications are favourable so far. While all the sectors are contributing to the move, the underperformance of the banking sector is still hurting the overall performance and any positive surprise from that front could help the index to surpass the recent high," Ajit Mishra, VP - Research at Religare Broking told Moneycontrol.

Jimeet Modi of Samco Group advised investors to remain cautiously bullish around these times especially when massive amounts are being raised from secondary markets, while Siddhartha Khemka of Motilal Oswal advised traders to stay cautious and keep booking profit at regular intervals.

As a normal schedule we will enter into the last week of June quarter earnings season, though companies are allowed to release June quarter numbers till September-end due to lockdown in containment zones.

In the coming week, around 700 companies will disclose their June quarter results including majority of mid and smallcaps.

As India started unlocking economy in June, the COVID-19 infections have been increasing rapidly. The total count doubled to over 20 lakh in just three weeks and on August 7, we crossed 60,000 mark in a day for the first time, taking the total to 20.9 lakh confirmed infections with 42,500 deaths as per Johns Hopkins University.

Experts feel it was on expected lines given the gradual increase in activities after a lockdown, but the increase in recovery rate to 68.42 (against little over 64 percent last week) is quite soothing.

Globally the infections count stood at 1.93 crore with 7.19 lakh deaths so far and United States remained at top with 49.5 lakh cases and 1.6 lakh deaths. Doctors feel the infections will keep increasing till we get the vaccine and some of vaccines are in Phase 3 trials, but till then, social distancing and use of mask on face with keeping cleanliness is the only solution.

The hearing in Supreme Court on the adjusted gross revenue (AGR) dues will be held on August 10, and hence Bharti Airtel and Vodafone Idea, which already made provisions with respect to same, will be in focus.

In the last hearing on July 20, the Supreme Court, after hearing all parties, observed that the amounts of AGR dues given by Department of Telecommunications (DoT) is to be treated as final and there can be no scope of re-assessment or recalculation, said Bharti Airtel which so far made a provision of Rs 47,576.6 crore for the same in quarterly earnings which as a result company has been posted quarterly losses.

Vodafone Idea also made provision of Rs 65,440 crore so far with respect to AGR dues, saying its ability to continue as going concern is essentially dependent on a positive outcome with regard to the timeframe for the payment of AGR dues to be made in instalments and successful negotiations with lenders.

Second Round of Stimulus Package

After a first round of around $3 trillion stimulus package passed in May this year, now there has been negotiations between Democrats and Republicans for second round of package. The last talks held between them on Friday failed due to fundamental disagreements and followed by that US President Donald Trump threatened executive action if the stimulus package is not passed, but he remains hopeful for a deal. Reports indicated that the package could get finalise in the coming week.

"World’s largest economy, the US is expected to finalize a second round of stimulus package in the coming week for the American people to fight economic fallout from the COVID-19 pandemic. This move is expected to lift overall sentiment of the US market and in turn markets across the globe. Accordingly, domestic markets are likely to mimic on stimulus clues and sentiments are likely to be positive," Jimeet Modi, Founder & CEO Samco Group told Moneycontrol.

FIIs were net buyers in cash segment for the last week, acquiring Rs 9,496.80 crore worth of equities and as a result they continued buying for fourth consecutive month after consistent selling in previous four months. The last week's buying included Bandhan Bank deals.

On the contrary, DIIs have net sold more than Rs 2,133 crore in the week gone by, in addition to over Rs 10,000 crore of selling in July, which could be due to profit booking and some redemption pressure as the market rallied 50 percent from its March 23's low point.

Experts feel the FII flow may continue given the ample of liquidity available globally, but there could some more outflow from DIIs on account of profit taking.

CPI inflation data for the month of July and industrial output for June will be released on August 12 and 11 respectively, while on August 14 - WPI inflation & balance of trade for July, deposit & credit growth for week ended July 31, and foreign exchange reserves for week ended August 7 will be announced.

June CPI inflation increased to 6.09 percent, from 5.84 percent in March while the industrial output contracted by 34.7 percent in May.

India's forex reserves increased significantly by $11.9 billion to over $534 billion in the week ended July 31, against $522 billion in previous week.

The Nifty50 clocked 1.3 percent gains for the week and formed bullish candle on weekly charts as bulls regained control after a passing in previous week.

The index rebounded after hitting a low of 10,880 levels during the last week, which could act as a crucial support in coming days, whereas 11,350 could be crucial level on the upside for bulls to show strength for higher targets, experts feel

"Looking at weekly closing in the Nifty index, the overall set up looks positive and a decisive move beyond 11,350 levels will provide further momentum towards 11,400-11,500 levels in the coming weeks," Nilesh Jain, Derivative and Technical Analyst at Anand Rathi told Moneycontrol.

The broader markets outperformed the benchmark index in the previous week and looking at the structure, the defensive trader needs to adopt a stock-specific approach, he feels.

The options data and falling volatility both indicated positive bias for the market in coming week. On the derivative front, huge amount of Put writing was seen at 11,000 and 11,100 strikes whereas the maximum open interest was placed at 11,000 strike, which held the open interest of 29 lakh contracts and also could to act as an immediate support in the coming week.

A fresh Call writing was seen at 11,500 strike which also held the maximum open interest followed by 11,300 strike.

The overall option data indicates that bulls are having the upper hand and Nifty may oscillate in a broader range of 11,000 - 11,500, experts feel.

The volatility index India VIX declined by 7.5 percent for the week to end at 22.38, which is giving comforts to the bulls. 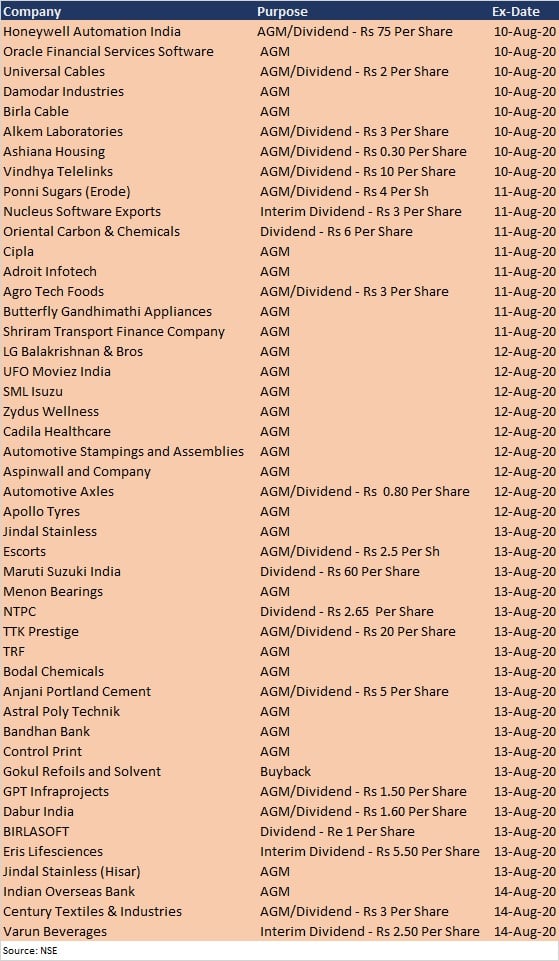 Meanwhile, Satin Creditcare Network will launch its Rs 120-crore rights issue on August 12 and the same will close on August 26. The issue price has been fixed at Rs 60 per share.