172@29@17@246!~!172@29@0@53!~!|news|business|markets|dalal-street-week-ahead-here-are-10-key-factors-that-will-keep-traders-busy-next-week-5-5976591.html!~!news|moneycontrol|com!~!|controller|infinite_scroll_article.php!~!is_mobile=false
Watch experts decode 'The rise of ESG investing' on October 29 at 4pm. Register Now!
you are here: HomeNewsBusinessMarkets

Nirali Shah of Samco Securities advised traders to avoid overbought stocks and oversold stocks can be considered for a medium term upside.

The market took a breather in the week that ended on October 16 with the benchmark indices losing 1.3 percent after witnessing gains in the previous two weeks in a ow. Rising COVID-19 infections in some European nations, delay in US stimulus, lower-than-expected domestic stimulus package and adjournment of SC verdict on moratorium dented sentiment.

Experts feel the market may remain rangebound (could be) till the US presidential elections in the first week of November, and all eyes will remain on second quarter earnings season, COVID-19 updates and global cues, while visible green shoots may continue to provide support to the market.

"Markets are expected to witness a sectoral rotation and are likely to trade in a narrow range. Investors may also witness profit booking at higher levels and are advised to keep calm and wait for a serious correction before investing," Nirali Shah, Senior Research Analyst at Samco Securities told Moneycontrol.

She advised traders to avoid overbought stocks and oversold stocks can be considered for a medium-term upside.

On Monday, the market will first react to HDFC Bank's quarterly earnings.

The September quarter earnings remains a key to watch out for as 171 companies will declare their quarterly scorecard in the coming week.

Earnings from consumer staples including Hindustan Unilever, Britannia Industries, Nestle and Asian Paints and their demand estimates will show the reality of consumption happening in the economy.

"Demand estimates by the management of marquee companies after Q2 earnings will be a good indicator of recovery in the formal economy," Nirali Shah said.

Most of brokerages expect the demand recovery in this segment given the opening of economy from lockdown, hence the volumes and topline of abovementioned companies may be better than previous quarter.

Kotak Institutional Equities feels HUL may report 2.7 percent growth in organic revenues in the domestic FMCG business with improvement across segments, while Britannia could continue to benefit from increased in-home consumption with strong 12 percent YoY growth in biscuits volumes.

Nestle India is expected to report 10.5 percent growth in domestic revenues with broad-base across segments, particularly prepared dishes, while Asian Paints may also see around 2 percent consolidated growth in Q2 sales led by pick up in domestic business against significant fall in June quarter, Kotak said.

The increasing recovery rate, improving fatality rate and fall in the active case count below 8 lakh mark after one-and-half-month continued to support the market. So far, India reported more than 75 lakh infections with over 1.13 lakh deaths so far (as per Johns Hopkins University).

The recovery rate is nearly 88 percent with fatality rate around 1.5 percent as on October 16 against 85.8 percent and 1.53-1.54 percent respectively last week.

But globally the markets were worried after the news of the second wave of COVID-19 infections in European nations and as a result, several countries including UK and Germany put strict restrictions to reduce the sudden resurgence of the COVID-19 pandemic.

Given the several vaccines are at Phase 2 and Phase 3 of clinical trials, experts are hopeful for the vaccine in the first quarter of CY 2021.

FIIs continued to be net buyers in October which could be one of supporting factors for the market, though DIIs remained on the sell side so far in current month.

Equitas Small Finance Bank will open its initial public offering for subscription for three days on October 20, with a price band at Rs 32-33 per share. This would be 12th public issue of this calendar year.

The company is going to raise Rs 517.6 crore via public issue which consists a fresh issue of Rs 280 crore and an offer for sale of 7.2 crore equity shares by promoter Equitas Holdings to comply with RBI's listing norms.

The Nifty50 gained 82 points on Friday and formed small-bodied bullish candle which resembles a bullish Harami pattern on the daily charts which is generally considered as a bullish reversal pattern. However, it lost 1.3 percent for the week and formed a bearish candle on the weekly charts.

The momentum indicators and oscillators are very well in the buy mode on the daily scale as well as weekly scale which indicates that the short term trend is still positive, he feels.

The overall option data indicated that the Nifty could remain in a broader range of 11,600 – 12,000 in the coming week, while the volatility is expected to increase in coming weeks given the US presidential elections in November but that could not go beyond 24 on the India VIX, experts feel.

"For the coming weekly settlement, the Nifty has highest Put base at 11,700 strike while Call base is placed at 12,000 strike. Hence, the Nifty should find immediate support near current levels of 11,700 below which a fresh round of weakness can be expected towards 11,400. However, we expect the Nifty to consolidate above 11,700 due to ongoing result season amid stock-specific movements," ICICI Direct said. 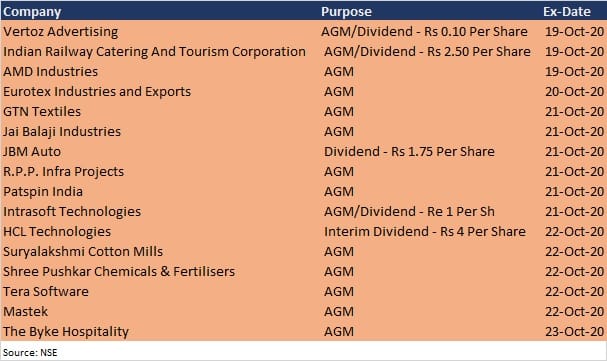 Deposit and bank loan growth for the fortnight ended October 9, as well as foreign exchange reserves for week ended October 16 will be released on Friday.

Foreign exchange reserves for the week ended October 9 came in at a record high of $551.50 billion, increasing by $5.86 billion during the week, the RBI data showed.