The market extended gains for the fourth consecutive week, scaling fresh record highs on June 11, as a consistent decline in fresh coronavirus cases with a pick up in vaccination drive and easing restrictions by states raised hopes for faster economic recovery.

The broader markets also joined the rally with the BSE Midcap index rising 2 percent and Smallcap up 3.5 percent. All the sectoral indices, barring Bank and Capital Goods, witnessed healthy buying interest. IT, FMCG, Healthcare, Metals, and Infrastructure were leaders.

In the coming week, the market will first react to April's industrial output data. Overall, the market momentum is expected to continue albeit with some consolidation next week as the key indices gained 7.6 percent each in the last four straight weeks, and with the last leg of the March 2021 quarter earnings season, the stock specific action could continue, experts feel.

"Markets have been gradually inching higher for the last four consecutive weeks but the underperformance of the banking index is certainly a cause of concern. However, contribution by index majors from the other sectors like energy, IT, healthcare and metal is encouraging, which is not only capping the damage but also helping the index to inch higher," said Ajit Mishra, VP Research at Religare Broking.

He further said, "Going ahead, we feel banking contribution would be critical to help Nifty test the next milestone of the 16,000 mark. We reiterate our bullish view and suggest continuing with the buy on dips approach."

Overall, the March quarter earnings season has been strong with positive management commentaries from corporates. In the coming week, more than 200 companies will release their quarterly scorecard including Coal India, Power Finance Corporation, Power Grid Corporation of India, and NTPC.

The fear of the second COVID wave seems to be gradually easing day after day as the country consistently added less than 1 lakh cases for the fifth straight day.

The positivity rate further dropped to 4.39 percent from 5.78 percent on a week-on-week basis. The active cases count also declined significantly to 10.8 lakh, compared to 15.55 lakh in the same period.

On the other side, the recovery rate improved further to 95.97 percent against 93.38 percent in the previous week, while the mortality rate remained steady at 1.25 percent.

The vaccination drive has gradually been gaining pace as more than 34 lakh doses were administered in the last 24 hours ended at 8 am on Saturday, taking the total to 24.96 crore COVID vaccination doses having administered so far.

Globally, the markets will closely watch the outcome of the two-day US Federal Reserve meeting on June 16.

"US FOMC meet would keep market volatile though they have already hinted at keeping interest rates to near-zero levels in order to aid the recovering economy. Any development on the same would be keenly awaited. Nevertheless, at the current juncture, increase in rates and tapering fears appear muted, with the US 10-year Treasury yield already hovering near the bottom end of its recent range," said Nirali Shah, Head of Equity Research at Samco Securities.

The US Dollar index, which measures the value of the dollar against a basket of six major currencies, continued to hover in the range of 90.00-90.50, while the US 10-year Treasury bond yield dropped to around 1.45% from 1.70% on a month-on-month basis despite likely rise in inflation going ahead.

The FII flow will also be keenly monitored as foreign investors returned to India with a net inflow of Rs 4,788 crore in June so far. In fact, there has been healthy buying by them from the second half of May.

FII flow is one of the key reason for the 7.6 percent rally in benchmark indices and double-digit gains in broader markets in the last four weeks.

CPI and WPI inflation for the month of May will be released on Monday, while Balance of Trade data for May will be announced on Tuesday.

Deposit and bank loan growth for the fortnight ended June 4, and foreign exchange reserves for the week ended June 11 will be released on Friday. On the same day, Monetary Policy Meeting Minutes of recent policy meeting held during June 2-4 will also be released.

After some quiet weeks, the primary market will be getting busy next week as four IPOs (initial public offerings) - Shyam Metalics, Sona Comstar, Dodla Dairy and KIMS Hospitals are lined up in the coming week.

The public issues of TPG-backed dairy company Dodla Dairy and General Atlantic-backed Krishna Institute of Medical Sciences (KIMS Hospitals) will open for bidding on June 16 and the same will close on June 18. Dodla will raise Rs 520.17 crore and KIMS will mop up Rs 2,143.74 crore via IPOs.

The Nifty50 traded higher throughout the session on Friday to gain 61.60 points and formed a Doji pattern on the daily charts as the closing was near its opening levels, indicating indecisiveness among bulls and bears. The index gained 0.8 percent during the week and formed a small bullish candle on the weekly scale.

Given of the rally for the last four consecutive weeks, experts feel the index could be gradually marching towards 16,000 mark but they seem to be uncomfortable with the weakness seen in banks. Bank Nifty was down 0.7 percent during the week, to close at 35,047.40.

"Since the last couple of weeks, we have been mentioning how there is no major hurdle seen before 16,000 and in line with this, the Nifty has been continuing its rally. But the kind of price action we witnessed during the week (especially in the banking space), it's not giving us comfort now. Hence, if the benchmark has to reach this milestone of 16,000 and even move beyond it, the Bank Nifty needs to surpass the sturdy wall of 36,000," said Sameet Chavan, Chief Analyst-Technical and Derivatives at Angel Broking.

"On the options front, the highest option concentration is placed at 15800 Call and 15700 Put strikes with more than 30 lakh shares each and combined premium of Rs 150. The current open interest is significantly lower compared to the last few weeks as volatility has declined significantly and risk aversion is visible among option writers. Hence, positive bias can continue with stop loss near 15,550," said ICICI Direct.

The volatility index declined further and moved down to 14.10 levels, the lowest level since February 20, 2020. "With the upcoming FOMC meet during the week, a round of upsides in the volatility index cannot be ruled out. Such low levels also suggest some caution in the market, which may result in extended consolidation in the index," said ICICI Direct. 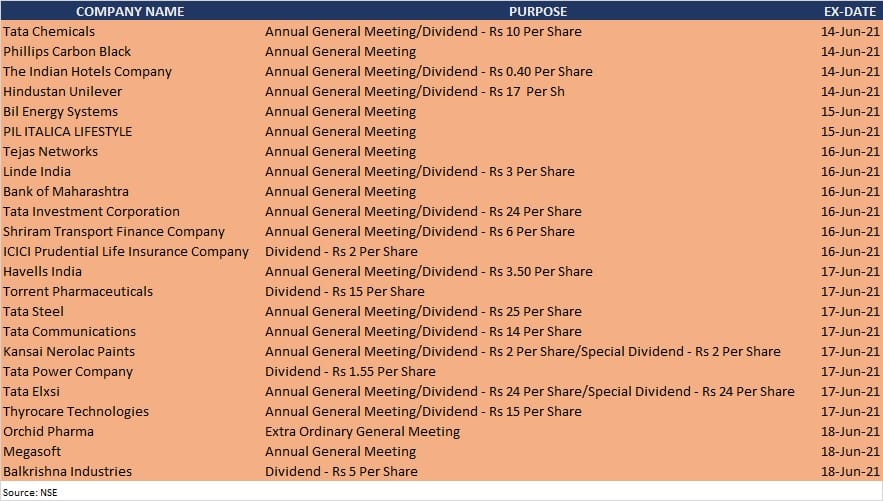