Going ahead, the key trigger would certainly revolve around high hopes from the Union Budget which may set the mood for markets, said Nirali Shah of Samco Securities.

After a disappointing start to the week amid resurgence of new coronavirus strain infections in China, the market rebounded in a good spirit to touch fresh record highs with the BSE Sensex climbing Mount 50,000 mark for the first time amid good earnings and positive global cues (with transfer of power to Joe Biden who sworn in as US President). But profit booking pressured the market in final sessions of the week ended January 22 as traders turned cautious ahead of Union Budget 2021-22.

Experts feel the volatility will continue in the coming truncated week as we are moving closer to Budget and expiry of January derivative contracts, while the sector rotation may continue amid December quarter earnings season. The market will first react to Reliance Industries earnings announced last Friday.

"Going ahead, the key trigger would certainly revolve around high hopes from the Union Budget which may set the mood for markets. Quarterly results would propel the volatility in bourses and participants may witness some sector reshuffling," Nirali Shah, Senior Research Analyst at Samco Securities told Moneycontrol.

Furthermore, "one should keep a vigilant eye on the events encompassing Beijing (China) as the authorities have ordered mass testing and enforced a strict lockdown after resurgence in cases of the new coronavirus strain. China being a major member in global trade, any serious impact from the new strain may lead to uncertainty. And uncertainties do not bode well with the markets," she said.

It's prudent to book profit on the rise and focus more on risk management, Ajit Mishra, VP - Research at Religare Broking advised.

The market will remain shut for trading on January 26 for Republic Day.

Here are 10 key factors that will keep traders busy in the truncated coming week:

We have a list of around 375 companies which are going to announce their quarterly results next week. The prominent names amongst them would be Kotak Mahindra Bank, Larsen & Toubro, Axis Bank, Hindustan Unilever, Lupin, Maruti Suzuki, Cipla, Dr Reddy's Labs, IndusInd Bank, IOC, Sun Pharma, Tata Motors, Tech Mahindra, Vedanta and ICICI Bank.

The Federal Open Market Committee will meet for the first time after the formation of new government under the Democratic party's Joe Biden who sworn in as the 46th US President last week.

Consensus indicated that the Federal Reserve is unlikely to take any action or change its monetary policy in its two-day meeting that will conclude on Wednesday night, but the commentary about economic outlook amid the coronavirus, vaccine and weak jobs data would be key to watch out for.

The market will keep reacting to the wide expectations about the upcoming Union Budget 2021-22 scheduled to be presented by the Finance Minister Nirmala Sitharaman on February 1. Hence the sector rotation and the volatility may continue in the coming week as well.

The Street has given much importance to the Budget this time, hoping for major announcements to revive the economy with focus largely on demand side, especially after the COVID-19 pandemic, though the slew of measures already announced by the government as well as the Reserve Bank of India since March last year.

Experts largely feel the budget could be one more strong step or agenda from the government (in addition to previous several measures) to bring the economy on growth path and keep it strong in coming years, especially after the controlled COVID-19 infections and amid vaccination drive.

The foreign investors remained net buyers in the week ended January 22, but the net selling on Friday raised many questions about sustainability of the flow in the near term though in the longer term, India is expected to attract large foreign money could be more than previous year. Hence, the flow would be key things to watch out for in coming week.

FIIs have net sold Rs 636 crore worth of shares on last Friday, for the first times after January 6. They were net buyers to the tune of Rs 4,176 crore worth shares in the week gone by, taking the total buying more than Rs 21,000 crore in the month of January so far.

On the other side, domestic institutional investors continued to use the every rise to book profits given the highly valued market, as they net sold over Rs 15,700 crore worth of shares in January.

The vaccination drive has been going on smoothly since the launch on January 16, as more than 15 lakh healthcare workers have been received the vaccination under the countrywide COVID-19 vaccination exercise till Saturday, the government said.

The total confirmed COVID infections were over 1.06 crore, while the recoveries were at 1.03 crore with deaths at more than 1.53 lakh.

Globally more than 9.62 crore people infected by the virus with over 20.58 lakh deaths, with United States remaining at the top with over 2.48 crore confirmed infections with over 4.14 lakh deaths. Several European countries also continued to struggle with COVID-19 crisis including United Kingdom, France, Spain, Italy, Germany etc showing higher cases count. China also started reporting new strain of COVID-19 cases and as a result the country imposed partial lockdown in Beijing last week. Hence, investors still worried about the global growth and as a result, the crude price continued to be in the range around $55 a barrel, experts feel.

The IPO market will remain active in the last week of January too, as kitchen appliances maker Stove Kraft will open its Rs 413-crore maiden public issue for subscription on January 25 and the same will close on January 28. The price band for the offer has been fixed at Rs 384-385 per share.

The Rs 1,154-crore initial public offer of Home First Finance Company India, an affordable housing finance company, will remain open for one more day till January 25. The issue was opened on January 21, with a price band of Rs 517-518 per share.

The Nifty50 fell 1.5 percent on Friday and formed bearish candle on the daily charts, while for the week, the index was down 0.4 percent and formed small bearish candle which resembles Shooting Star kind of pattern on the weekly scale.

Experts feel the further volatility along with correction can be possible in the near term with 14,220 likely to be key for further correction.

"A small negative candle with upper and lower shadow was formed on the weekly chart. Technically this pattern could be considered as a high wave type formation at the highs and this indicate a high volatility/confused state of mid among participants ahead of key economic event of Union Budget 2021," Nagaraj Shetti of HDFC Securities said.

"The formation of weekly pattern signal high volatility and sell on rise possibility in the next week. The Union Budget of 2021 is expected to be an event for the market to form a reversal. Hence, long positions needs to be protected with appropriate stoploss," he added.

A decisive move below 14,220 could open a larger downward correction in the market and any rise from here is likely to attract selling pressure around 14,460-14,520 levels by next week, according to him.

"Just like last week 14,600 and 14,700 Call strikes hold the highest Call base while the Put base is placed at 14.000 strike. Immediate support for the index lies near its last week lows of 14,200 and below which current declines might extend towards 14,000 levels. On higher side, resumption of the trend can be expected only if Nifty moves above 14,500 again," ICICI Direct said.

The volatility index fell from the highs of 25.41 seen in the beginning of last week, to 22.42 at close on Friday. "Despite sharp decline seen in the last two sessions, volatility index has not seen sharp surge suggesting expectations of limited downsides. Move towards 25 levels once again can be considered as a sign of caution," the brokerage said.

Among other data points, bank credit and deposit growth for the fortnight ended January 15, and foreign exchange reserves for week ended January 22 will be released on Friday.

Infrastructure output and fiscal deficit data for December will also be released on the same day.

Apart from Fed meet, here are other key global data points to watch out for next week: 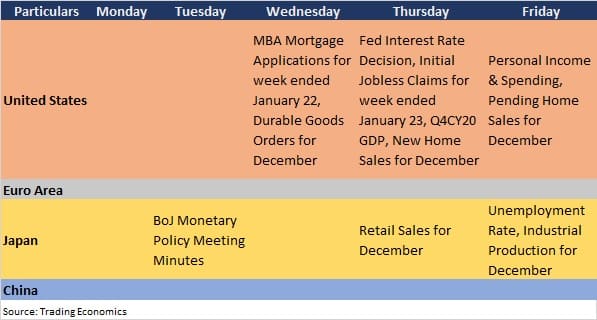