Bank Nifty is expected to be in focus in the coming week, given the strong momentum led by fundamentals and technical factors.

The market made a historic high in the first week of year 2021 ended January 8, rising 2 percent for second week in a row backed by positive global cues after Democratic Party's control over US senate, optimism on vaccine rollout, hope of strong quarterly earnings and consistent liquidity flow.

The benchmark indices ended at record closing high. The BSE Sensex rallied 913.53 points to 48,782.51 and the NSE Nifty jumped 328.75 points to 14,347.25, while the broader markets continued to outperform benchmarks as the Nifty Midcap 100 index climbed 5.2 percent and Smallcap 100 index gained 3.8 percent during the week, which experts feel, is expected to continue in coming weeks too.

The momentum is unlikely to get impacted by bears, at least till the Union Budget 2021, given the healthy business figures reported so far which raised hopes for better December quarter earnings, along with liquidity support and vaccine progress, though there could be intermittent consolidation, experts feel.

"The focus of the Indian markets have currently shifted to third quarter earnings. Healthy business figures reported by banking and auto sectors have led to a better quarterly outlook which is likely to continue in the coming week keeping the sectors in the limelight. The outcome of the TCS quarterly result will dictate the opening mood of the IT index next week," Vinod Nair, Head of Research at Geojit Financial Services told Moneycontrol.

Ajit Mishra, VP - Research at Religare Broking suggests continuing with a sector/stock-specific trading approach as there has been rotational buying across the sectors. However, traders should limit their leveraged positions and avoid contrarian trades, he advised.

TCS started off December quarter earnings season on a strong note as it reported better-than-expected earnings on all counts with constant currency revenue growth at 4.1 percent for the quarter. First the market will react to these numbers on Monday.

After the leader, next three biggest companies Infosys, HCL Technologies and Wipro will release their quarterly numbers next week. The mood seems to have already boosted by TCS and Accenture, so the street is hopeful for strong numbers from these companies as well.

Infosys is expected to show around 3 percent sequential revenue growth in constant currency and 3.3-3.4 percent growth in dollar revenue led by ramp up of large deals along with contribution from acquisitions, while the company is likely to revise marginally upwards its full year revenue growth guidance but may maintain margin guidance.

Wipro may also report around similar revenue growth like Infosys, in constant currency as well as dollar revenue QoQ, backed by ramp-up of large deals and full quarter contribution of an acquisition.

HCL Technologies could show around 2.7 percent sequential growth in constant currency and around 3 percent in dollar revenue QoQ for the quarter ended December 2020, while the IT company is expected to show marginal upward revision in full year revenue growth guidance.

India continued to show strong improvement in coronavirus as the recovery rate reached to 96.41 percent against 96.08 percent last week with recoveries crossed 1 crore mark, which was more than 46 times higher than current active cases which were around just 2.2 lakh, while the mortality rate remained at around 1.44 percent, the lowest among most affected countries, with total deaths at around 1.51 lakh.

However, the situation remained weak in the United States which reported more than 3 lakh infections on daily basis for the first time, taking the total confirmed infections to 2.2 crore with 3.7 lakh deaths as per Johns Hopkins University. Among others, United Kingdom, Brazil, France, Spain, Germany, Mexico, South Africa etc also have upward graph in terms of cases, while the new strain of coronavirus cases also increased.

On the other side, the dry run, happened so far in several states, has been successful ahead of actual roll out of vaccine across the country with priority to doctors, healthcare workers and the frontline workers, followed by those above 50 years of age. The government decided to start COVID-19 vaccination drive across the country on January 16.

On Friday, the bank loan and deposit growth for fortnight ended January 1 and foreign exchange reserves for week ended January 8 will be released, while balance of trade data for December is also due on same day.

Bank Nifty is expected to be in focus in the coming week, given the strong momentum led by fundamentals and technical factors. The index, which participated late in the bulls' party, showed strong performance since October last year. It gained over 56 percent in last more than three months amid easing NPA concerns and improving data points.

Majority of experts feel the index is likely to hit fresh record high next week. The earlier record high of 32,613.10 was seen on December 30, 2019.

"The BankNifty reclaimed the psychological level of 32,000 on the closing basis which is a positive sign. The MACD has provided a fresh buy crossover above the zero line and RSI has breached a falling trend line on the daily chart. The overall setup hints that BankNifty is likely to hit a fresh new high in the coming week and inch towards 32,800/33,000 levels. On the downside, the immediate support is placed at 31,800 followed by 31,600 levels," Nilesh Jain of Anand Rathi said.

"The derivative data for the BankNifty index indicates that the highest open interest on the Call side is placed at 33,000 strike followed by 32,500 strike and a fresh Put writing was seen at 32,000 strike which holds the maximum open interest and also likely to provide immediate support. Based on the data of the BankNifty index, we are expecting a short-covering rally in the coming week," he added.

The foreign money flow continued to chase Indian equities after seeing the highest inflow (of over Rs 1.6 lakh crore) among emerging markets in 2020. FIIs net bought more than Rs 9,200 crore worth of shares in January so far, in addition to around Rs 53,500 crore of inflow in December. Hence, as long as the flow remains, the momentum in market is expected to be intact, experts feel.

On the other side, domestic institutional investors continued to prefer profit booking as they net sold Rs 4,878 crore of shares in January so far, in addition to net selling in previous three consecutive months.

The Nifty50 gained 1.5 percent on Friday and 2.35 percent for the week, forming bullish candle on the daily as well as weekly charts, which is a positive trend indication.

Experts expect the momentum to push Nifty50 towards 14,500 mark in coming days, with having crucial support at around 14,000 levels.

"Nifty on the weekly chart formed a long bull candle with minor lower shadow, which indicate continuation of sharp up trended movement as per weekly timeframe chart. Some symmetrical chart pattern is unfolding in Nifty weekly timeframe chart. Hence, Friday's upside breakout of small range and a formation of symmetrical pattern on the daily/weekly chart could indicate one more weeks of upmove is likely in the market before showing any downward correction from the highs," Nagaraj Shetti of HDFC Securities told Moneycontrol.

On the derivative front, a fresh Put writing was seen at 14,200 and 14,300 strike on Friday where the highest open interest of 37.1 lakh contracts was placed at 14,200 strike. The base has continuously been shifting higher and 14,200 levels will now act as immediate support in the coming week.

On the Call side, a short covering was seen in the majority of in-the-money strikes and a fresh addition was seen at 14,500 and 14,600 strikes. The maximum open interest of 25.3 lakh contracts is placed at 14,500 strike.

"A breach of 14,500 on the upside will attract further short-covering rally and upside will open for 14,800 levels. Based on the data we can expect Nifty to oscillate in the range of 14,200 – 14,800 in the coming week," Nilesh Jain of Anand Rathi said, adding the volatility is expected to increase towards 25 levels ahead of Union Budget which is scheduled on February 1.

The volatility index 'IndiaVIX' surged 5 percent to end at 20.6 levels in the week gone by. 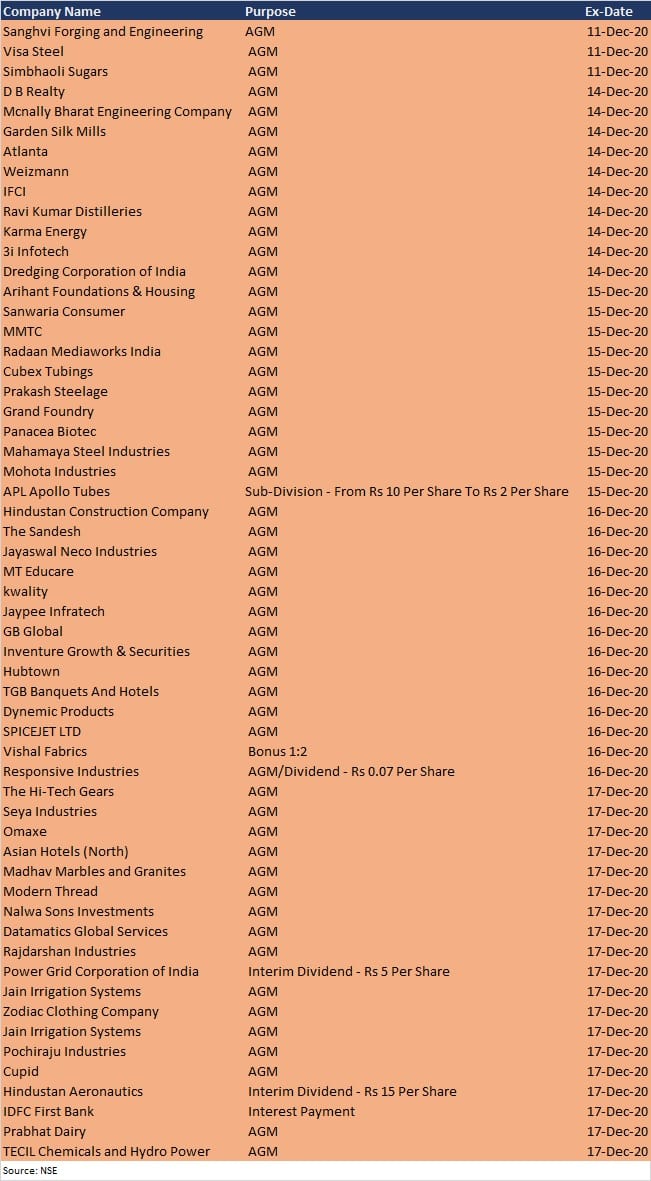