Live Now |Join The Sustainability 100+ Summit and witness the dawn of an era of sustainable development. Click Here!
you are here: HomeNewsBusinessMarkets

Dalal Street Week Ahead: 10 key factors that will keep traders busy this week

Experts expect the rangebound trade to continue in the coming week as well. The banking sector and global cues are key for any directional move going ahead, while earnings season, auto sales data & PMI numbers could drive stock-specific movements, they say.

Weak global cues and consistent selling by foreign institutional investors (FIIs) pulled the market lower, however, US Federal Reserve's dovish policy helped regain some losses in the latter half of the week.

Auto, banks, energy, FMCG, and pharma stocks remained under pressure last week. On the other hand, buying was seen in IT and metal names.

The broader markets outperformed benchmarks, with BSE Midcap and Smallcap indices adding 0.29 percent and 1.36 percent, respectively, during the week gone by.

On Monday, the market will first react to auto sales numbers for the month of July and Q1 FY22 earnings of India Inc - UPL, Britannia Industries and Bandhan Bank - which came after the market hours on Friday.

Experts expect the rangebound trade to continue in the coming week as well. The banking sector and global cues are key for any directional move going ahead, while earnings season, auto sales data & PMI numbers could drive stock-specific movements, they say.

The primary market will continue to stay abuzz next week as four companies -  Devyani International, Windlas Biotech, Exxaro Tiles and Krsnaa Diagnostics - will launch their IPOs.

The initial public offer of these companies will open between August 4-6 to raise a total of  Rs 3,614 crore.

At Rs 1,838 crore, KFC and Pizza Hut operator Devyani International is the largest IPO amongst them.

Krsnaa Diagnostics, one of the fastest-growing diagnostic chains in India, is planning to raise Rs 1,213.33 crore via public offer at THE higher end of the price band of Rs 933-954 per share.

Pharma company Windlas Biotech plans to raise Rs 401.54 crore and Exxaro Tiles Rs 161 crore through IPOs next week. They have fixed the price band at Rs 448-460 per share and 118-120 per share respectively.

Glenmark Life Sciences, the subsidiary of Glenmark Pharma, will debut on August 6.

The company will finalise IPO share allotment on August 3, while the funds will be refunded to ineligible investors on August 4.

Glenmark Life shares are currently trading at a premium of Rs 130-150 in the grey market, data from IPO Watch and IPO Central showed. This equates to a trading price of Rs 850-870 per share,  up 18-21 percent over the expected final issue price of Rs 720.

The interest rate decision by Monetary Policy Committee (MPC) in its three-day meeting between August 4-6, 2021 will be one of the biggest events next week.

The majority of experts expect the MPC to hold interest rates but the commentary on economic growth and inflation trajectory along with measures for most-affected sectors (if any) will be keenly watched out for.

"The RBI MPC is unlikely to rock the (policy) boat in August, opting to keep the repo rate at 4 percent and the policy corridor unchanged. Forward guidance will favour a continuation of the accommodative policy stance to guard against growth risks, especially the third Covid wave," said Radhika Rao, Senior Economist at DBS Group Research.

"The accompanying commentary will heed inflation risks through close monitoring and refrain from tweaking the policy levers for now," she added.

India saw a single-day rise of 41,831 new COVID-19 cases, taking the tally to 3,16,55,824, while the cumulative vaccine doses administered in the country has crossed 47 crore, according to Union Health Ministry data updated on Sunday.

Registering an increase for the fifth consecutive cases, the active cases have climbed to 4,10,952 and comprise 1.30 percent of the total infections, while the national COVID-19 recovery rate was recorded at 97.36 per cent, the data updated at 8 am showed.

An increase of 2,032 Covid cases has been recorded in the total number COVID-19 caseload in a span of 24 hours.

Last week, they sold Rs 10,825 crore worth of shares, almost double the amount of the week prior. This is a sign of caution.

On the contrary, domestic institutional investors continued to support the market as they net bought Rs 8,206 crore worth of shares last week, taking the total buying to Rs 18,393.92 crore in July, the highest monthly buying since March 2020.

Nifty50 wiped out all its gains in the last half an hour of trade to close marginally lower (-0.1 percent) on Friday, forming a Shooting Star pattern on the daily charts. On a weekly basis, it shed 0.6 percent and witnessed a Hammer pattern.

Experts largely expect the index to remain consolidative till it breaks the range of 15,600-15,900 levels on either side.

"Technically, on daily and intraday charts, the market has formed a lower top formation which is broadly negative, but at the same time, the Nifty is hovering near 20 and 50 day SMA with modest volume activity. We are of the view that the broader texture of the market is still in the bullish zone, but due to non-directional activity indices may consolidate in the range of 15,600-15,900," said Shrikant Chouhan, Executive Vice President, Equity Technical Research at Kotak Securities.

In the near future, "the 15,720 level could act as a strong support level for traders and below the same correction, the wave is likely to continue up to 15,600. On the flip side, the 15,900 level should be the sacrosanct level for the bulls, above the same uptrend formation could continue up to 15,960-16,050 levels," he added.

"The highest option base remains at ATM 15800 strike for both Call and Put strikes for the coming weekly expiry. Hence, a major directional move may not be seen. We believe that breach of ongoing trading range of 15,600-15,900 on a closing basis should trigger fresh directional bias for another 300 points," said ICICI Direct.

"Open interest in the Nifty at the inception of the August series is one of the lowest we have seen since September 2020. Continued rangebound movement in the index may have caused the current low open interest. We believe a fresh directional move should trigger fresh open interest build-up in coming sessions," said the brokerage.

India VIX, which measures the expected volatility in the market, increased to 12.80 from 11.76 levels on week-on-week basis, but overall it has also been in broader range of 12-15 levels for several weeks now. Besides, the auto companies will start announcing their July sales data in first few days of August, so respective stocks including Maruti Suzuki, TVS Motor, Tata Motors, Eicher Motors, Bajaj Auto, Ashok Leyland, M&M and Escorts will be in focus.

We also have an important macroeconomic data scheduled in the coming week. Markit Manufacturing PMI data will be released on August 2, and Markit Services & Composite PMI numbers for July are scheduled on August 4. 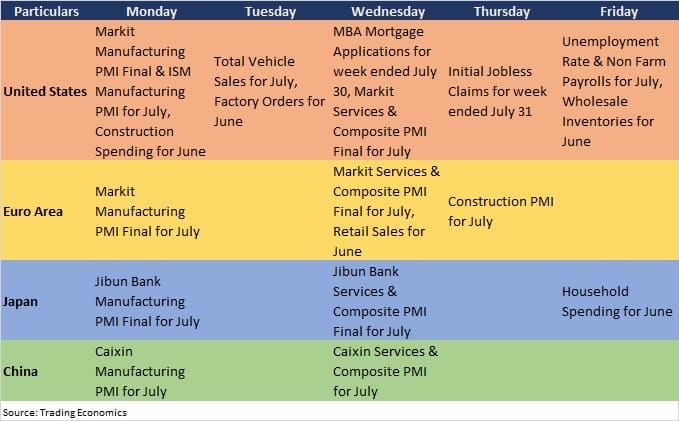