India's fiscal deficit and infrastructure output data for the month of May will be released on June 30, while S&P Global Manufacturing PMI data for June will be declared a day later

The broader markets, too, joined the party. The Nifty midcap 100 index rose 2.2 percent and the smallcap 100 index climbed 1.75 percent during the week.

As the market seems to be in an oversold zone, more buying is expected in the coming days but volatility can't be ruled out, experts said.

"We expect volatility to remain high next week as well, thanks to the scheduled expiry of June month derivatives contracts. Besides, the performance of the global indices especially the US, crude movement and monsoon progress, etc. will remain on the radar," Ajit Mishra, VP-Research at Religare Broking said.

Indian markets are taking comfort from their global counterparts but the recent move lacks decisiveness. It will be prudent to maintain a cautious stance until some concrete reversal signals are seen, he said.

The participants should focus on identifying opportunities based on sectoral trends, Mishra said.

In May, auto companies had reported healthy growth in sales, largely due to a low base in the year-ago month due to the second Covid wave. Even month on month, there has been an improvement in demand but a full recovery is still some distance away.

The Nifty Auto index turned out to be the biggest outperformer in the last two and a half months, rising 23 percent.

The market will closely track the progress of the monsoon, which waters half of India’s farmland. With red-hot inflation, the slow progress of June-September rains made the market nervous. The rainfall deficit, however, narrowed to 2 percent from 25-30 percent last week and sowing has picked up.

"Following a slow start, rainfall has dramatically improved in the past few days, with more areas receiving their first rains of the season. As a result, the cumulative rainfall deficit for 1-23 June was only 2 percent below the long-period average (LPA), improving from the 25 percent deficit in the week earlier," Rahul Bajoria, MD & Chief India Economist at Barclays, said.

It is too early to see a meaningful trend for the season, as evident from large regional disparities. Floods in the northeastern state of Assam and the neighbouring areas are skewing the averages, he added.

In May, the India Meteorological Department (IMD) said the country is expected to receive 103 percent rainfall of a long-term average this year. If it is on expected lines, then this could be the fourth consecutive year of a normal monsoon.

The US quarterly GDP growth rate numbers to be released on June 29 will be keenly watched amid the rising fears of a recession in the world's largest economy. Data in May indicated that the US economy had contracted 1.5 percent in January-March 2022, which is weaker than first estimates of a 1.4 percent contraction.

"The USA would officially enter into a recession if they post a negative growth and thus this could have a spill-over effect on global markets," Yesha Shah, Head of Equity Research, Samco Securities, said.

Recently, the International Monetary Fund reduced its full-year US growth forecast to 2.9 percent for 2022 against an earlier estimate of 3.7 percent following aggressive rate hikes by the Federal Reserve, which could slow down demand.

Here are other key global data points to watch out for next week: 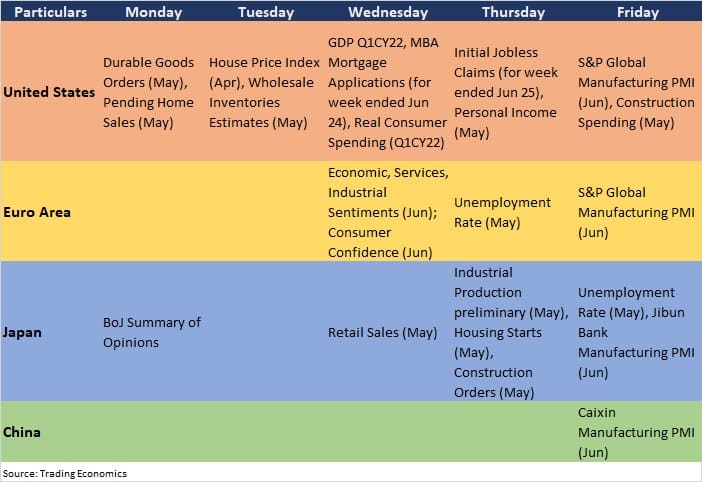 Elevated prices will be a dampener for oil-importing countries, including India which meets about 85 percent of its fuel requirements through imports. High oil prices due to tight supply amid the Russia-Ukraine war and resultant sanctions against Moscow are a major worry for India.

The Reserve Bank of India in June raised the full financial year inflation forecast to 6.7 percent from 5.7 percent.

International benchmark Brent crude futures settled the week at $113.12 a barrel on June 24, rising $3 a barrel, but was flat week on week amid concerns that faster policy tightening by central banks could slow down growth.

Foreign institutional investors continued their selling given the faster policy tightening by central banks to arrest rising inflation and the war in Ukraine. If the selling continues, then the market upside is expected to get capped, experts said.

FIIs have dumped Rs 53,600 crore worth of shares, so far, in June, the third highest monthly outflow since March 2020, against Rs 54,300 crore outflow in the previous month.

Domestic institutional investors (DIIs) bought nearly Rs 42,000 crore worth of shares in June, so far, against nearly Rs 51,000 crore of buying in the previous month. Overall DIIs, which played a supportive role in every market correction, have tried to compensate for the FII outflow.

"The FII selling has been wiping out entire flows of 2021 and mid of 2020. Thus, the selling pressures are likely to abate and if foreign markets stabilise, Indian markets should see positive action," Naveen Kulkarni, Chief Investment Officer at Axis Securities, said.

Technically, the Nifty is back above its previous support of 15,700, which is now acting as a resistance. It recovered more than 500 points from its fresh 52-week low (15,183) recently and a further rally is likely given the positive global sentiment. Unless the index decisively stays sustains above the crucial 16,000-mark, range-bound trade will continue with the support at 15,400-15,300, experts said.

The Nifty formed a bullish candlestick on the weekly charts, while there was an indecisive formation on the daily charts. The index gained nearly 1 percent on June 24 and 2.6 percent for the week.

"Several major global indexes are seeing a bounce from falling support. This suggests the probability of a quick rebound surge. We recommend that traders retain a neutral to slightly bullish bias as long as the Nifty does not go below the immediate support level of 15,200. The immediate resistance level is now set at 15,900," Yesha Shah, Head of Equity Research at Samco Securities, said.

The sentiment indicators also pointed to an uptrend. The relative strength index (RSI) moved from oversold territory, around 29 levels, to 43.3 levels now, while the Stochastic gave a positive crossover during the week. MACD also seems to be on the verge of a positive crossover and if that happens, then it could be a buy signal.

The market is expected to be volatile during the week, with the monthly F&O expiry on June 30. The options data indicates that the Nifty could be in a broader trading range of 15,400 to 16,000, with the lower band shifting higher from 15,000 after the recent bounce.

"Considering the quarter-end settlement, we expect volatility to remain high. A short-covering move is expected only if the Nifty sustains above 15,700 levels," ICICI Direct said.

The brokerage said despite significant volatility, Call open interest remained largely unchanged at 15,500 strike. Last weekly settlement has not diverged much from those levels.

For the coming week, they feel similar activities are visible at 15,700 Call strike. Hence, "a round of covering is expected only if the index closes and sustain above these levels. The Put base is significantly high at 15,500 strike, which should act as immediate support", it said.

The volatility also cooled down to 20.55 levels, down 9.71 percent week on week, giving comfort to bulls. India's fiscal deficit and infrastructure output data for May will be released on June 30, while S&P Global Manufacturing PMI data for June will be declared a day later.

Foreign exchange reserves update for the week ended June 24 and deposit and bank loan growth data for the fortnight ended June 17 will also be released on July 1.

Disclaimer: The views and investment tips expressed by experts on Moneycontrol.com are their own and not those of the website or its management. Moneycontrol.com advises users to check with certified experts before taking any investment decisions.
Sunil Shankar Matkar
Tags: #Market Cues #Market Edge #Nifty #Sensex
first published: Jun 26, 2022 12:25 pm