Bulls remained in control of the Dalal Street for the sixth consecutive week despite the rising number of COVID-19 cases in the country. The BSE Sensex and Nifty50 gained 3 percent and 2.7 percent respectively during the week ended July 24, driven by banking & financials, IT, infra and auto stocks.

A better-than-expected June scorecard for India Inc (so far), positive FII flows as well as progress in the development of a vaccine kept the party going on D-Street. Positive global cues after a large $858 billion spending package announced by European Union also added to the rally. However, fresh US-China tensions and rise in US jobless claims capped gains.

The broader market underperformed the benchmarks as the BSE Midcap and Smallcap indices gained over a percent each during the week.

Given the liquidity boost, the momentum might continue going forward, experts feel, but they advised remaining cautious as benchmark indices rallied more than 12 percent in six straight weeks, and expect some volatility in the coming week partly due to expiry of July futures & options contracts. On coming Monday, the market will first react to ICICI Bank and ITC earnings.

"Currently, the market is trading ahead of fundamentals. Based on valuation terms, the market is currently above the pre-COVID level. It may be high due to low actual earning of FY20 and lack of growth in FY21. This may be also high due to the performance of a few sets of stocks with high weightage. Still, on a historical basis, we are in the bubble region in terms of valuation and it is advisable to be cautious and place assets in safe categories and sectors," Vinod Nair, Head of Research at Geojit Financial Services told Moneycontrol.

Ajit Mishra, VP Research at Religare Broking said in the coming week, schedule derivatives expiry of July month contracts combined with the on-going earnings season would keep the volatility high. Apart from that, global cues and updates related to the COVID-19 will also be on the participants’ radar, he added.

The price band has been fixed at Rs 274-275 per share for the public issue which consists a fresh issue of up to Rs 1,000 crore and an offer for sale of up to Rs 3,500 crore by selling unitholders.

Mindspace already raised Rs 2,643.74 crore from strategic and anchor investors, which is 58.74 percent of the total issue size of Rs 4,500 crore, ahead of its issue opening. The last day for subscription would be July 29.

Shares issued in the follow-on public offer by Yes Bank will be listed on July 27. The share price corrected nearly 49 percent in the last two weeks, which experts feel was warranted given the issue price discount to the market price.

The stock price closed at Rs 13.65 on July 24, falling consistently from July 10 (Rs 26.65 closing price on July 9), while the final issue price has been fixed at Rs 12 per share, at which the bank received maximum bids for its public issue during July 15-17.

Yes Bank raised around Rs 14,270 crore through its FPO, which was lower than actual issue size of Rs 15,000 crore.

The key factor to watch out for in the coming week would be Reliance Industries as it would declare its June quarter earnings on July 30. The stock rallied 50 percent in last two months as Reliance became net debt-free well ahead of its target of March 2021, and gained over 16 percent in last one week.

Telecom segment remains the key point to watch out for as brokerages expect average revenue per user at around Rs 135-137 per month with strong EBITDA and profit on a sequential and yearly basis, while on the refining front, Motilal Oswal feels RIL is expected to report GRM at $9.0 per barrel (against $8.9 a barrel in Q4FY20) helped by inventory gain as well as discounts offered to Indian refiners at the beginning of the quarter.

The country has witnessed a consistent rise in COVID-19 cases with over 40,000 cases coming out each day for the last 4 days.

Globally, there have been over 1.59 crore confirmed cases of COVID-19. More than 6.43 lakh people have died so far.

On the vaccine front, the progress has been at a fast pace with three global companies - Oxford University-AstraZeneca, Sinovac and Moderna Inc - reaching the final stage. Meanwhile in India, Bharat Biotech in collaboration with the National Institute of Virology and the Indian Council of Medical Research have also begun human trials of COVAXIN drug.

So far, especially after re-opening of the economy in all non-containment zones, there has been an improvement in tractor and two-wheeler segment, and to some extent in passenger vehicles, but commercial vehicle space remained weak.

The Nifty50 with a gain of 2.7 percent during the week has seen bullish candle formation on the weekly charts, negating the indecisive pattern formations in previous two weeks, which all indicated that bulls still have upper hand at Dalal Street; though the index has been moving in a range of Wednesday's trade when there was Hanging Man pattern formed.

Experts feel the short to medium trend remains positive but in the near term, there could be some consolidation given the consistent run-up in equities.

"A long bull candle was formed in this week, as per weekly timeframe chart, after the formation of hanging man type candle pattern of last week. Most importantly Nifty formed unfilled opening weekly gap with this candle. This is rare formation and previously in the last two occasions, such weekly opening upside gaps have been filled subsequently in the next week, by intra-week decline. Hence, there is a possibility of profit booking in the next week," Nagaraj Shetti, Technical Research Analyst at HDFC Securities told Moneycontrol.

The July futures & options contracts will get expired on coming Thursday and traders will rollover their positions in the next month. Hence, there could be some volatility while the options data suggested that the index could move in the range of 11,000-11,350 in coming days, experts feel.

"The coming week has monthly expiry. Thus, the trend will be decided by the closure of Call writing positions, which are placed at the 11,200 strike. Some positions have already shifted to 11,500 strike, which will remain a target for coming weeks," said Amit Gupta of ICICI Direct. 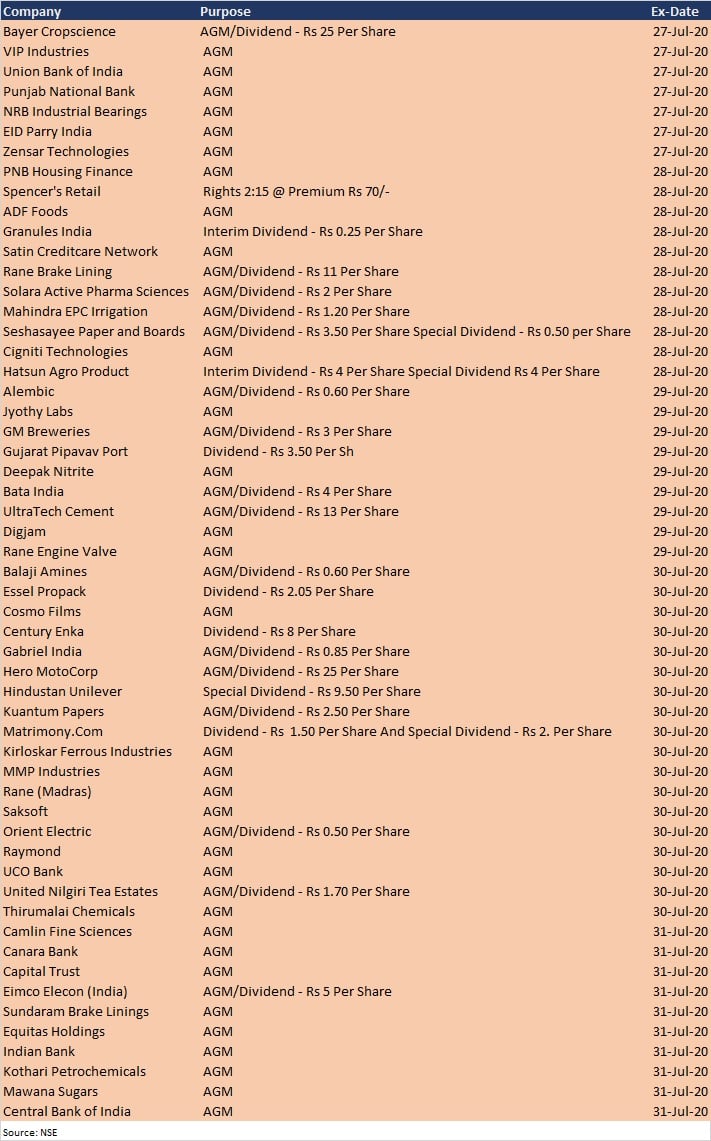 Infrastructure output and fiscal deficit data for June will be released on Friday, while on same day, deposit and bank loan growth for fortnight ended July 17, and foreign exchange reserves for week ended July 24 will also be announced.

The two-day meeting of the Federal Open Market Committee (FOMC) will be concluded Wednesday tonight. The interest rate is expected to remain steady at 0-0.25 percent, but the commentary will be closely watched by the markets globally as the June meeting had indicated that the federal funds rate is likely to stay at these levels until the economy gets back to normal.

Here are other key global data points to watch out for in the coming week: 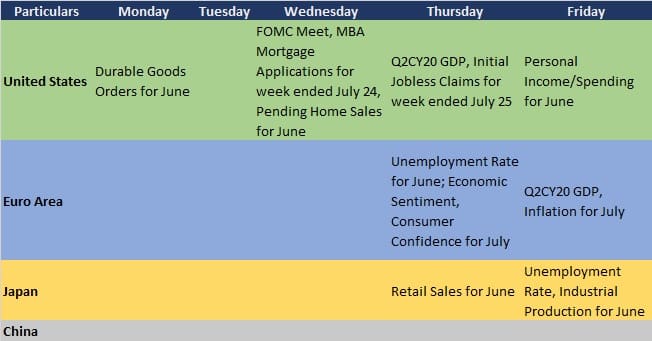