The stellar run on Wednesday & Thursday helped the market close with a percent gain amid volatility in the week ended December 3, as investors and traders kept a close watch on new Covid variant Omicron that created lot of uncertainty globally. The fall in oil prices, good GDP growth in Q2FY22, and further uptrend in Manufacturing PMI also supported the equity, though rising expectations for faster Fed tapering limited upside.

Apart from that short covering and value buying in most beaten down quality stocks including index heavyweights also pushed the market higher. The BSE Sensex rallied 589.31 points to 57,696.46, and the Nifty50 climbed 170.25 points to 17,196.70, while the broader markets also joined the rally, with the BSE Midcap and Smallcap indices rising around 1.35 percent and 1.25 percent respectively.

Experts feel the market is expected to remain volatile in the coming week as well, amid Monetary Policy Committee meeting, Omicron uncertainty, and economic data.

"With a slew of events on the horizon, traders should brace themselves for an action-packed week. Market players will attempt to read between the lines of the RBI's monetary policy outcome," says Yesha Shah, Head of Equity Research at Samco Securities.

She further says inflation data for China and the United States are also due next week, which may add to the market volatility. Additionally, "as more clarity on the new Covid-19 version becomes available, investors can expect whipsaw movements in the markets."

New Covid variant Omicron, which found in South Africa and later spread to nearly 30 countries including India, created lot of fear in the minds of investors and traders last week and that is expected to continue in the coming week, too. Now India reported fourth patient of Omicron that returned from South Africa, which resulted into tightening of Covid restrictions across the country, though overall Coronavirus cases are under control with India reporting less than 10,000 daily cases for more than a week now.

The Monetary Policy Committee, after three-day meeting, will disclose its interest rate decision on Wednesday. The street will closely watch how the RBI will react to the current Omicron crisis, economic growth, inflation numbers and hawkish US Fed. Experts largely feel the central bank could reduce the gap between repo rate and reverse repo rate and continue with VRRR (variable rate reverse repo).

The coming week is going to see the flood of IPOs as four IPOs - RateGain Travel Technologies, Metro Brands, Shriram Properties, and CE Info Systems (MapmyIndia) - will open for subscription.

RateGain Travel Tech, the largest Software as a Service (SaaS) company in the hospitality and travel industry in India, will launch its Rs 1,335.73-crore IPO during December 7-9, with a price band of Rs 405-425 per share, while ace investor Rakesh Jhunjhunwala-backed footwear company Metro Brands will open its public offer during December 10-14, 2021.

Anand Rathi Wealth will close its IPO on Monday, December 6, while Rakesh Jhunjhunwala-promoted Star Health and Allied Insurance Company will make its debut on the bourses on December 10.

Brent crude as well as US crude futures fell for the sixth consecutive week, which is a good factor for the India which is a net oil importer. OPEC and its allies maintained their plan to increase supply by 4 lakh barrels per day in January 2021.

FIIs continued to keep their finger on sell button for another week ended December 3 amid Omicron uncertainty and expected faster Fed tapering, though DIIs managed to offset the FII selling pressure to major extent. Experts feel FIIs' behaviour is expected to play a critical role in the direction of the market.

Industrial production for the month of October, and foreign exchange reserves for the week ended December 3 will be released on Friday.

Industrial output in September 2021 recorded 3.1 percent growth compared to the same period last year mainly because of the waning base effect, disruption from heavy rainfall, and the impact of semiconductor shortages on auto output. Going ahead, "the IIP number will be reflective of genuine growth traction in industrial production with increasing economic activity and improved consumption due to the festive season and support from export demand that has aided the recovery in industrial activity," said Mohit Nigam, Head of PMS at Hem Securities.

The Nifty50 managed to get back and hold on to crucial 17,000 mark during the week, forming bullish candle on the weekly charts, but corrected over a percent on Friday and saw bearish candle formation on the daily scale. Overall experts feel the market is expected to remain rangebound and if it decisively breaks 17,000 mark then there could be increasing chances of index moving towards 16,500 levels.

"While Nifty corrected sharply it finally took support near 16,750. In an extremely volatile week, the Nifty succeeded to close above the 100-day simple moving average-SMA (17,169) which is broadly positive," said Amol Athawale, Deputy Vice President - Technical Research at Kotak Securities.

However, he further said, "on the dismissal of 17,140, the market could again enter in the short term bearish zone and below the same, the index could gradually fall to 16,880-16,780 levels. "Based on the daily chart the market is forming the series of a lower top lower bottom. In case the market breaks 16,780 then it would have major implications and in that case the possibility of the index hitting 16,500 would turn bright."

The option data indicated that the Nifty50 could be in the range of 16,800-17,700 levels in coming days, while the declining volatility could play a supportive role for the market, experts feel.

"From an options perspective, despite the marginal decline in the volatility and recovery, Put option bases are significantly lower than the Call bases. While the highest Call option base is near 50 lakh shares at 17400 and 17500 strike suggesting hurdle at higher levels," said ICICI Direct. However, "the highest Put base is at 17000 strike may act as an immediate support."

The brokerage believes only a sustain move above 17,400 is crucial for the recovery to continue. Hence, "we feel Nifty is likely to trade in a broader range of 16,800-17,400 in coming week."

India VIX was down by 11.3 percent from 20.80 to 18.45 levels on week-on-week basis. "Volatility has cooled down from its higher levels giving some stability to the market," said Chandan Taparia of Motilal Oswal. 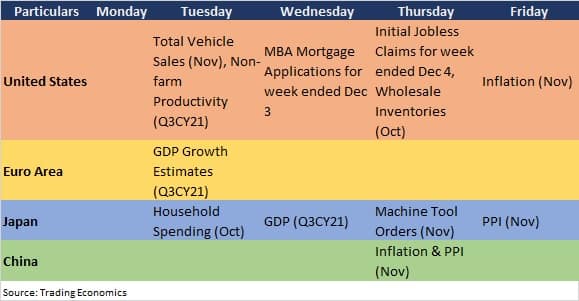 Disclaimer: The views and investment tips expressed by investment experts on Moneycontrol.com are their own and not that of the website or its management. Moneycontrol.com advises users to check with certified experts before taking any investment decisions.
Sunil Shankar Matkar
Tags: #Market Cues #Market Edge #Nifty #Sensex
first published: Dec 5, 2021 07:32 am

With Tamil Nadu officer's video of a playing ape, Elon Musk is reminded of his son