Unmesh Sharma is the Head of Institutional Equities at HDFC Securities.

HDFC Securities believes IT continues to be a structural growth story in the long run, led by increasing cloud adoption, digitalisation and cyber security, but in the short term, the space is expected to remain under pressure amid fears of a slowdown in developed markets, fuelling concern on new order visibility, says Unmesh Sharma, who heads Institutional Equities at the brokerage house.

Apart from that, the preferred sectors by HDFC Securities are large-cap banks and IT, industrial and real estate, power, and autos, while the big call for the next 12 months is “industrials over consumer”, says Sharma, based on his nearly two decades of experience in capital markets. Excerpts from interaction with Moneycontrol:

Do you think IT space is looking attractive now though there could be near term pressure in the space?

We believe IT continues to be a structural growth story in the long run led by cloud adoption, digitalisation and cyber security. However, in the short term, we expect the space to remain under pressure amid fears of a slowdown in developed markets, leading to concerns on new order visibility.

Further, elevated wages, subcontracting, travel expenses and attrition remain near-term headwinds. We would wait to see early signs of resolution of these near-term concerns before calling it an attractive opportunity. 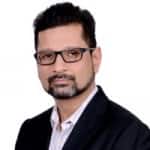 Do you expect the FII flow to remain volatile in the coming months, given the subdued global environment?

In the long term, India stands out due to lower external vulnerabilities and a well-capitalised central bank and corporate sector. In the short term though, we believe that markets and FPI flows will remain volatile. We believe the fight against inflation (as rightly and vehemently acknowledged by Chairman Powell) is going to be a long grind.

We expect pressure on long-duration assets such as Emerging Market equities which includes India. The task has got tougher due to political pressures, most notably due to US President Joe Biden’s student debt forgiveness, which could cost anywhere between $400-600 billion. The impact on liquidity from Quantitative Tightening currently remains a massive overhang.

Volatility could also emerge due to divergence in views from various central banks such as those of the EU and China) who are facing disparate challenges. And notably, the market is not cheap. In an uncertain environment, this gives up no comfort on downside protection.

Do you think the recession if it comes in developed markets can delay the capex recovery in India?

The HSIE (HDFC Securities Institutional Equities) team has analysed capex trends in detail. It is their observation that there are multiple capex engines operating simultaneously. Sectors which are leading the private sector capex recovery are metals, power, telecom, cement, autos and oil & gas. Additionally, public sector capex is primarily being carried out in roads, railways, power, defence, and various rural welfare schemes.

As these capex drivers represent diversified sectors, we believe capex recovery at aggregate level wouldn't be significantly impacted even if recession hits developed markets. There may be slight delays in few of the individual sectors depending upon extent of their exposure to global markets, but overall impact is unlikely to be substantial.

What are your broad expectations from the policy meetings of Federal Reserve and Reserve Bank of India scheduled to be held in later half of this month?

Between Jackson Hole and comments made in various forums since, it is now clear that the US Fed's primary focus is on price stability. Indeed we expect front-loading of rate hikes to continue with a 75 bps hike in the next meeting.

India has seen some relied from crude prices and possibility of cooling of inflation due to monsoon. However, the RBI is also likely to keep pace with global trends. Indeed we expect a 50 bps hike in next central bank meeting.

Do you think the retail sector seems to be on the cusp of delivering strong growth in coming quarters?

The recovery trade has played out well in the retail sector post covid. We expect this to get a further uplift in the forthcoming festive season. However, it is noteworthy that this demand is mainly urban led and so far rural recovery has remained elusive.

Further, as most geographies of India (except parts of UP & eastern India) have recorded a normal monsoon this year, a recovery in rural demand is expected. Also, government’s policies to boost rural capex is creating employment adding to consumption potential. Collectively we remain optimistic about retail sector.

As several experts expect the outperformance in broader space over benchmarks in coming months, what is your advice on sector positioning? Do you think one should start taking positions in the banking space now?

We continue to believe that Active Strategies will work in an uncertain global macro environment. The model portfolio by the HSIE Research Team maintains its bias towards value and domestic economy-facing sectors. We remain underweight on stocks at the high risk end of the duration curve (like new-age technology), consumer (staples and discretionary), energy, NBFCs, and small banks.

Our preferred sectors are large cap banks and IT, industrial and real estate, power, autos and we continue to add positions in long-term thematics (eg. City Gas, financial inclusion - Insurance and Capital Markets). Our big call for the next 12 months is “Industrials over Consumer”.

Disclaimer: The views and investment tips expressed by investment experts on Moneycontrol.com are their own and not those of the website or its management. Moneycontrol.com advises users to check with certified experts before taking any investment decisions.
Sunil Shankar Matkar
Tags: #Daily Voice #MARKET OUTLOOK #Nifty #Sensex
first published: Sep 12, 2022 07:38 am