Prices had rallied in 5 waves and after that the correction which we saw can be termed as wave a and now prices could have a pullback in wave b towards 38.2 retracements at 67.10, 50 percent is at 68.2 and 61.8 percent is at 69.3, says Priyank Upadhyay of SSJ Finance & Securities.

In the winter of 1925, a Topical Press Film cameraman made a silent record of the Company’s operations in Persia. The 35mm film, entitled ‘The Persian Oil Industry’, was 45 minutes long and shown to specialised audiences in technical institutions. Later, a 15 minute film was produced and shown in public cinemas under the title of ‘In the Land of the Shah’ and a 20 minute version bearing the same title was made for distribution by Pathescope Limited. The film, in its various forms, was seen by nearly a million people between 1926 and 1938. The approximate cost of the film was £1,600.00. Which company is being discussed here?

Oil prices rose by around 1 percent on Friday, lifted by uncertainty over whether OPEC would manage to agree on a production increase at a meeting in Vienna later in the day.

WTI Crude was at USD 66.35 a barrel. After weeks of back-and-forth sparring, Saudi Arabia and Russia have reportedly reached a preliminary deal to boost crude supply by 1 million barrels per day but other OPEC members including Iran have opposed this.

Some countries are unable to ramp up capacity to such an extent, so the actual increase may amount to more modest 600k barrels per day. A net increase of 600-800k barrels per day is probably priced in already and the announcement of such a modest boost may even trigger a relief rally.

OPEC agreed on Friday to raise oil production by around 1 million barrels per day from July for the group and its allies. The output gain is nominal. The real increase will be smaller because several countries that recently under produced oil will struggle to return to full quotas while other producers will not be allowed to fill the gap.

This could lead a pullback towards higher levels. Apart from the OPEC meet market will also take cues from movement of dollar index, recent strength in dollar index from 92/93 to 95 has pressured oil prices and now dollar index is approaching a resistance area of 95.50/96 and has turned lower from there towards 94.50 which could provide support to oil prices and we could expect a pullback rally. 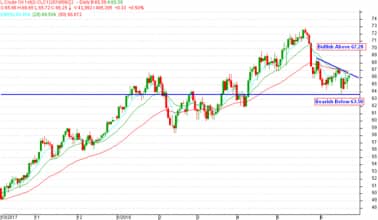 Disclaimer: The author is AVP - Commodity Research, SSJ Finance & Securities. The views and investment tips expressed by investment expert on moneycontrol.com are his own and not that of the website or its management. Moneycontrol.com advises users to check with certified experts before taking any investment decisions.
Moneycontrol News
TAGS: #Commodities
first published: Jun 23, 2018 11:09 am