COVID-free? These 28 stocks more than doubled PAT in March quarter

The key message from the March quarter is that the earning recovery has been pushed back by at least a year but there were some stock-specific outperformances.

The corporate earnings for the March quarter were largely muted, as was largely expected. Profits of Nifty constituents declined by over 20 percent on a year-on-year (YoY) basis following the coronavirus outbreak and lockdown in the last few days of the March.

The Nifty sales declined 5.1 percent YoY for the March quarter. Most sectors reported double-digit declines in profits, with defensives like healthcare, technology and consumer sectors being the only exceptions.

Analysts expect Nifty50 EPS growth to be extremely volatile over FY21 and FY22 due to the dip and recovery resulting in CAGR of 13.8 percent over FY22-20.

The key message from the March quarter was that the earning recovery was pushed back by at least a year but there were some stock-specific outperformance, Motilal Oswal has said.

"...markets are looking beyond FY21, aided by global recovery and a gradual return to normalcy," Motilal Oswal said in a report

There 28 stocks that reported doubling of profit in the March quarter compared to the year-ago period. Can we saw they all are free from the impact of COVID? Experts are cautious even when picking the stocks that have more than doubled the profit.

Companies that have recorded 100 percent or more growth in their net profit numbers from a YoY perspective include MRF, Gujarat Gas, Laurus Lab, Granules India, Navin Fluorine and Alkyl Amines.

“For the majority of these companies, the profit growth is looking strong due to low base. The slowing economy and sector-specific challenges had already impacted their financials last year,” Ajit Mishra, VP Research, Religare Broking, told Moneycontrol.

“For long-term wealth creation, we like a few of them that include SBI, GAIL, UltraTech Cement, Coromandel International, and Gujarat Gas, given their strong presence in their respective sectors,” he said. 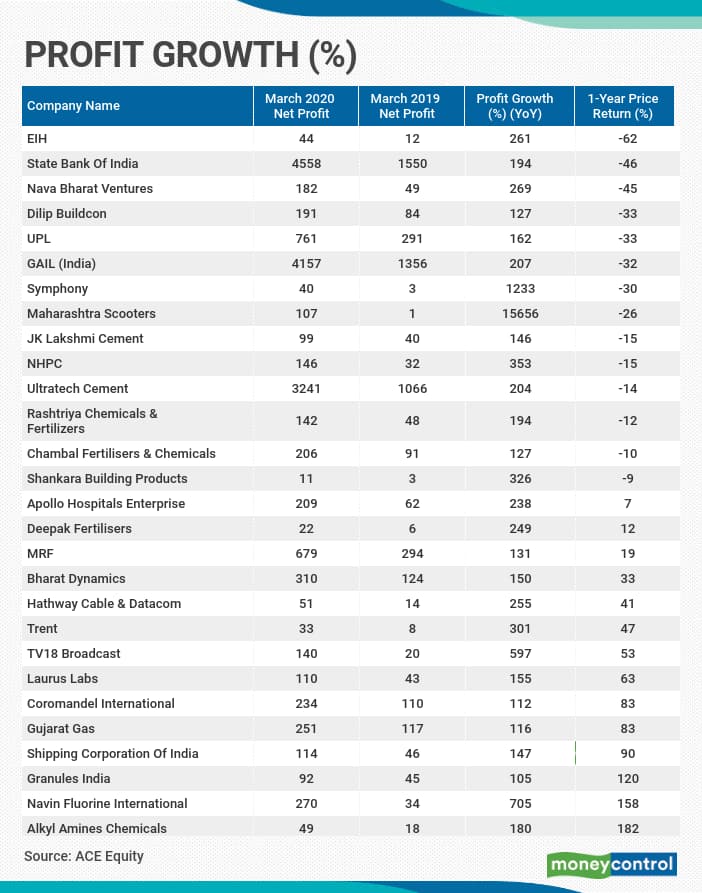 “Even after profits doubling on a YoY basis in the quarter ending March 2020 for stocks like SBI, NHPC, Ultratech Cement, etc, they all have given negative returns ranging from -9% to -60%. In my personal view, this is not surprising, and I feel that this is the tip of the iceberg,” Arjun Yash Mahajan, Head–Institutional Business at Reliance Securities told Moneycontrol.

Even before coronavirus struck, there were signs of a slowing economy. The effect of the outbreak will be seen in April-June 2020 quarter. "It looks like the worst is yet to come and in my personal view, it will last for more than a few quarters, to say the least,” he said.

The June quarter earnings, too, are expected to be subdued due to the extension of lockdown in April and May, say experts, but there could be a few exceptions in terms of sectors such as FMCG, pharma and even IT.

“There are few exceptional sectors such as FMCG and pharma which had seen healthy buying interest and would post better numbers for the quarter,” said Mishra of Religare Broking.

“In the June quarter earnings, demand revival, the outcome of better monsoon, raw material prices and management outlook would be key things to watch out,” he said.

Mahajan of Reliance Securities is of the view that March quarter was disappointing but the June quarter will be disastrous. Between the two, the March quarter would look much better.