Coronavirus-hit market falls 7% in just 9 sessions, but these 8 stocks buck the trend

Technically, the market is trying to find a bottom after a vertical fall but there is a need for some kind of relief on the Coronavirus front for the market to witness any relief rally.

The Indian and global equity markets have been volatile for the past few days, especially after central banks across the globe announced measures to support the economy amid spread of novel coronavirus.

In eight out of last nine consecutive trading sessions, Nifty, Sensex, BSE Midcap and Smallcap indices have corrected over 7 percent each as virus-led death toll increased to more than 3,100 and over 93,000 infected cases.

After China, Italy and South Korea are the most affected countries. India reported 28 confirmed cases on March 4, an increase from 6 on March 3.

The spread of virus raised concerns over earnings growth, but the market will closely watch the developments with respect to coronavirus and the volatility is expected to continue for few more days given the hope of more monetary policy action by other central banks, experts feel.

"If not continued well, the spread of the virus can have significant impact on the domestic consumption-driven economy which is already under significant pressure. In fact, this event has introduced additional downside risks to our earnings estimates for FY21," Siddhartha Khemka, Head - Retail Research at Motilal Oswal Financial Services told Moneycontrol. 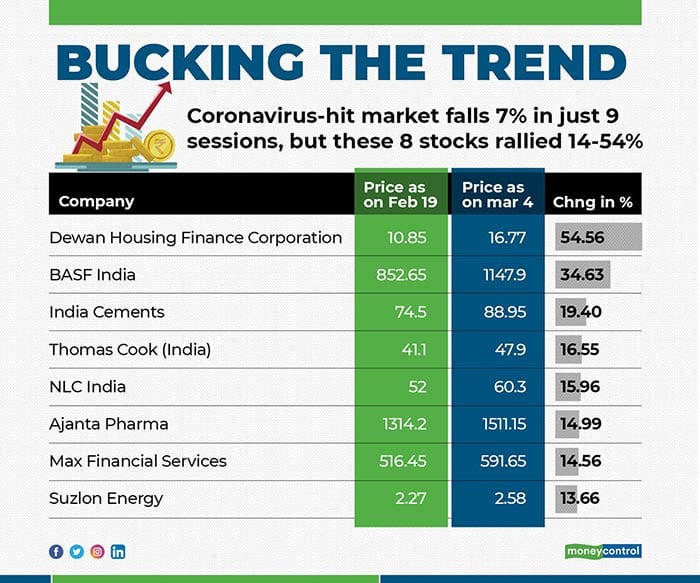 "Till we see a semblance of normalcy returning, markets are likely to be under pressure and remain volatile. Fluctuations in FII equity flows can also add to volatility," Khemka said. FIIs net sold nearly Rs 16,000 crore worth of shares in last 8 consecutive days, which is in line with outflow in emerging markets.

On the other hand, bloodbath was also seen across sectors with BSE Metal index falling the most, down 11 percent followed by Auto, Bank, Capital Goods, FMCG, IT and Realty which corrected 5-10 percent.

Federal Reserve and Reserve Bank of Australia reduced interest rate by 50 bps each, while the South Korea announced bailout package of $9.8 billion.

European Central Bank and Bank of England are also expected to consider policy action to support the economy as infected cases have also been increased in Europe.

"The recent surge in the coronavirus cases outside China has spooked the investors’ sentiment across the globe thus the monetary measures by various central banks are going unnoticed," Ajit Mishra, VP - Research at Religare Broking said.

"Markets are currently witnessing roller-coaster ride and we do not see this ending anytime soon. Traders have no option but to align their trades accordingly and prefer hedged bets," he added.

Technically, the market is trying to find a bottom after a vertical fall but there is a need for some kind of relief on the Coronavirus front for the market to witness any relief rally.

"Bulls are trying to protect the 11,050-11,000 support zone where if they manage to protect this zone then we can expect a pullback rally towards 200-DMA of 11,700 while if Nifty surrenders 11,000 mark then the long term trend may turn bearish where 10,700 would be an immediate support level," Santosh Meena, Senior Analyst at TradingBells said.