Investors’ lost nearly 2 lakh crore in the week gone by. The average market capitalisation of the BSE-listed companies fell from Rs 146.87 lakh cr recorded on February 28 to Rs 144.31 lakh cr on March 6.

Indian markets witnessed a massive selloff which pushed the benchmark indices below crucial support levels. The S&P BSE Sensex broke below 38,000 while the Nifty50 closed below 11,000 levels. The big carnage, however, was seen was seen in the small and mid-cap space.

The Sensex fell 1.92 percent while the Nifty saw a decline of 1.89 percent for the week ended March 6. Broader market underperformed as the S&P BSE Small-cap index plunged 2.7 percent followed by the S&P BSE Mid-cap index which was down 2.55 percent in the same period, data showed.

Indian markets remained volatile due to both global and domestic factors. On the global front spread of coronavirus (COVID-19) led to a risk-off sentiment among investors across the globe, and on the domestic front, the announcement of a moratorium on Yes Bank weighed on sentiment.

Investors lost nearly Rs 2 lakh crore in the week gone by. The average market capitalisation of the BSE-listed companies fell from Rs 146.87 lakh crore recorded on February 28 to Rs 144.31 lakh crore on March 6.

The large part of the carnage was led by small-caps. As many as 159 stocks in the small-cap index fell 10-70 percent. These include names such as Vascon Engineering, Swan Energy, Nitin Fire, Welspun India, Gulf Oil, Alok Industries and Borosil Renewables, AceEquity data showed. 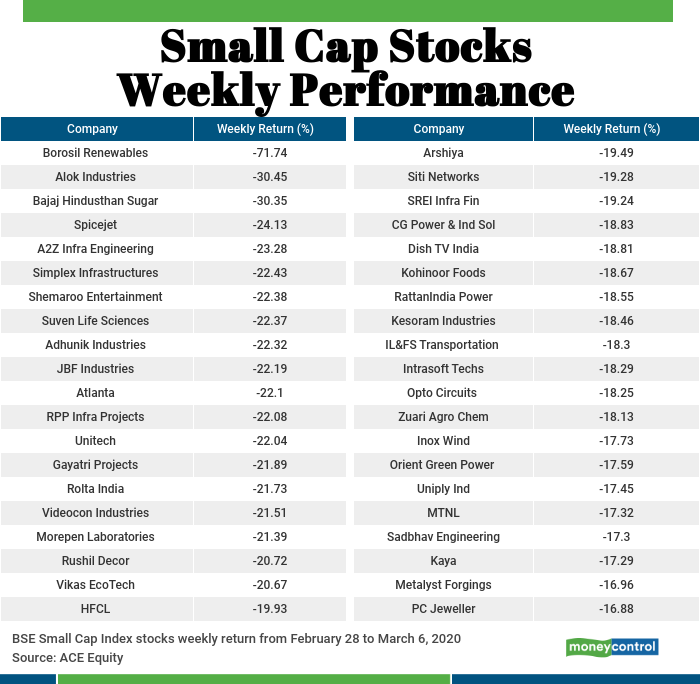 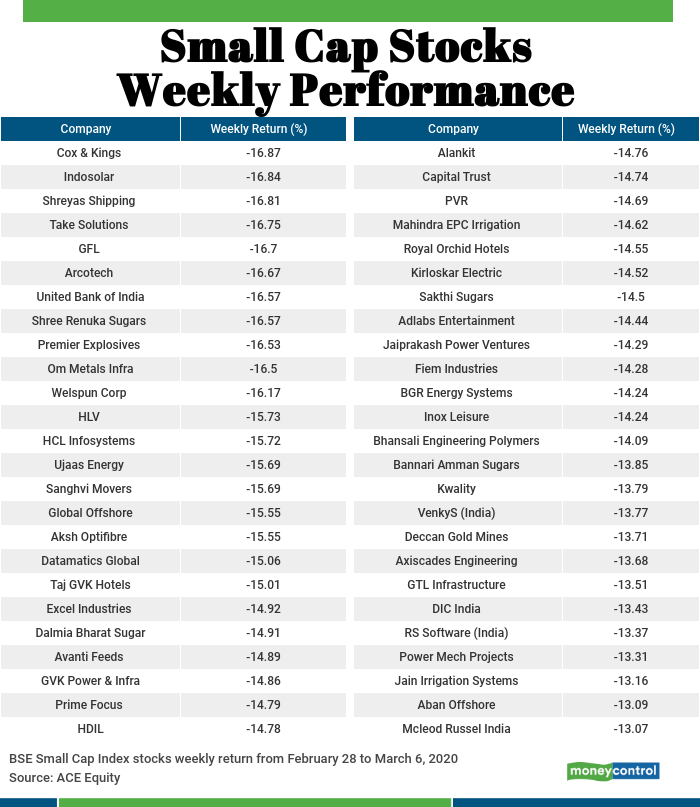 Experts feel that rising COVID-19 fears and its possible impact on the global economic growth is likely to weigh on markets in the coming week as well. There is a higher possibility that the Nifty may retest lower levels before showing signs of bottoming out."Massive selloff in global markets, fears of a prolonged world economic slowdown due to the COVID-19 outbreak, disruption in supply chain, weak corporate earnings, tumbling banking system and weak economic conditions such as lower gross domestic product (GDP) and rising inflation are multiple hurdles restricting bulls to show its move in current market scenario," Ritesh Asher – Chief Strategy Officer (CSO) at KIFS Trade Capital told Moneycontrol.

"We may see bears leading key benchmark index nifty 50 further south where the first line of defense for bears is placed near 10,600 levels," he said.

The rise in confirmed COVID-19 cases in India or globally will weigh on sentiment in the coming week. With no major data lined up, investors will also closely watch for clarifications on the Yes Bank issue from the government or the Reserve Bank of India (RBI).

"Currently, the Yes Bank saga too is expected to settle in the coming two to three weeks. Hopefully, March-end would end the fear which will give the new financial year a fresh beginning," he said.

Equity benchmarks extended losses over the third consecutive week as Nifty lost 280 points or 1.9 percent to end the week at 10,989. The equity benchmarks tumbled to their lowest weekly closing level in five-months as COVID-19 outbreak weighed relentless selling pressure across the board.

The broader market also witnessed a sharp decline as both the Nifty mid-cap and small-cap index closed lower by 3 percent and 4 percent, respectively.

"The weekly price action formed a sizable bear candle carrying a lower high-low, indicating extended correction on the breach of last week low of 11,175. Going ahead, of the panic low (10,827) on March 6, it will be crucial to watch, as breach below 10,827 would lead to a continuation of correction towards 10,600 in the coming weeks," ICICIdirect said in a report.

"However, a follow-through strength and decisive close above the high wave candle (10,827) on March 6 would open a further pullback option. Historically, over the past decade, in nine out of 11 instances, market corrections have been to the tune of 14 percent to 16 percent on average," it said.

The report further added that in the current scenario, the index has already corrected 13 percent, along with an oversold placement of weekly stochastic oscillator (placed at 20) thereby offering a favourable risk-reward. Hence, we expect supportive efforts to emerge near 10,600.