Budget rally takes Sensex to 52,000: Here are 5 takeaways for investors

The markets are likely to inch towards 53,500 in the near term. 51,200 is now crucial support on the lower side, says Jay Thakkar

Indian markets have been on an upward trajectory since Union Budget which was announced on February 1. The growth-oriented proposals by Finance Minister Nirmala Sitharaman have helped Sensex climb 52,000 levels after a steep correction prior to the Budget.

For the month of February – the S&P BSE Sensex and Nifty50 have rallied over 12 percent each. The S&P BSE Sensex hit a record high of 52,516 in intraday trade while Nifty50 recorded a life high of 15,431 on Tuesday.

“Sensex hit 52K level for the first time on February 15 and it took less than a month for the market to hit 52K from 50K. The Nifty50 might touch 15,800 by March 2021,” Gaurav Garg, Head of Research at CapitalVia Global Research Limited told Moneycontrol.

Garg further added that investors should be positively biased and any dip can be considered as a buying opportunity. Investors sitting on good profit can continue to hold on to their profits for some more time with a revision in their stop loss.

The outlook still remains strong and investors are advised to buy the dip and avoid going contra at this point in time. The big breakout on Monday has opened the gates for the S&P BSE Sensex to inch towards 53,000 in the near term, suggest experts.

“The markets are likely to inch towards 53,500 in the near term. 51,200 is now crucial support on the lower side,” Jay Thakkar - VP & Head of Equity Research at Marwadi Shares and Finance Ltd told Moneycontrol.

“Most importantly, the index has taken off its crucial resistance of 51,804 levels which has led to a breakout after a short-term consolidation in the markets,” he said.

Although there are no immediate near-term risks for the stock market, experts feel that the rise in crude oil prices along with the hardening of bond yields across global markets could be near-term concerns that could result in a knee-jerk reaction. Investors should remain cautious and stay stock specific.

“FIIs turning net seller on Friday indicate a pullback in the near term. Investors need to be cautious at these levels and must bet on quality names with robust earnings visibility and margins of safety,” Binod Modi, Head - Strategy at Reliance Securities told Moneycontrol.

“However, higher Brent prices and hardening of bond yields across global markets could be a near term concerns,” he said.

We have collated a list of key market data points that highlight Sensex's journey from 50K to 52K:

Investors’ wealth captured by the BSE-listed companies rose to Rs 205 lakh crore (as on February 15) compared to Rs 186 lakh crore on January 29, data from BSEIndia.com showed.

“A good Budget which was in-line with the expectations, strong Q3 numbers by India Inc, high institutional inflows, and easing COVID-19 situation with the fast-paced implementation of vaccination drive are some of the factors which are leading the market indices to hit all-time-highs levels,” says Garg of CapitalVia Global Research Limited.

About 217 stocks in the S&P BSE500 index that rose more than 10 percent so far in February. Experts advise investors to book profits in some of the names, and stay with the ones that are likely to benefit the most from the Budget 2021.

“The sectors which are likely to outperform from hereon are auto, IT, pharma, infrastructure, cement and chemicals. Investors can continue to hold stocks from these sectors on with a revised target and stop-loss if the estimated target is revised upwards,” says Thakkar of Marwadi Shares and Finance Ltd.

“Those stocks which fall under the aforementioned category but don't have much higher revised targets on the upside should be exited in profit and some other stocks from these sectors should be added which are relatively available at cheaper valuations,” he said. 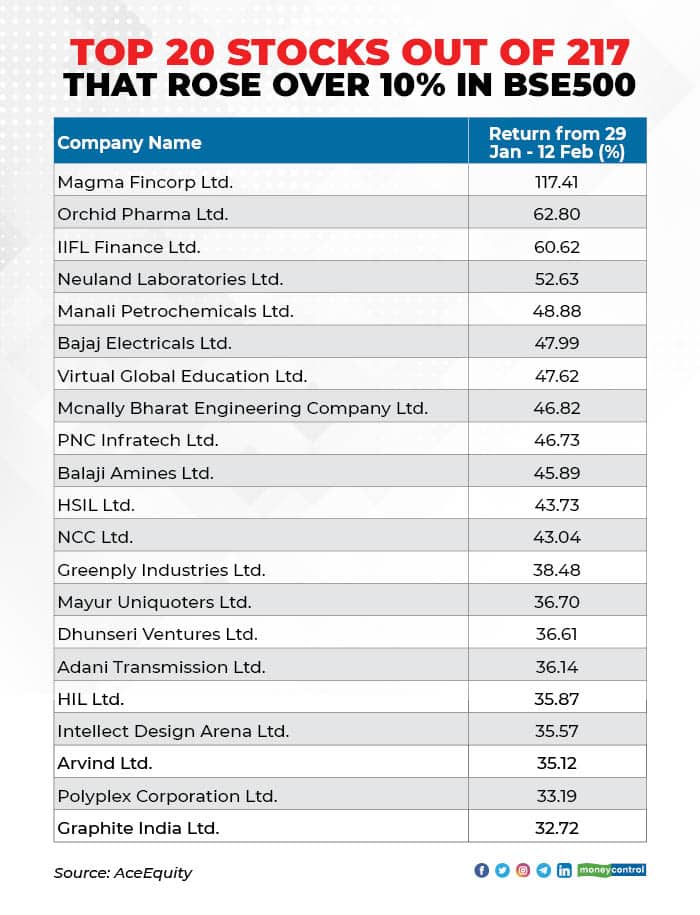 Benchmark indices have surged on the back of broad buying across the market. Strong global cues, robust commentary from India Inc, accommodative policy by the MPC, as well as pro-growth Budget proposals helped economy-linked sectors.

“Considering the strong positive undercurrent, we expect portfolios with an orientation towards financial services, discretionary consumption and industrials to benefit significantly in the medium term,” he said. Foreign institutional investors (FIIs) who were net sellers in the run-up to the Budget turned net buyers by pumping in more than Rs 20,000 crore in the cash segment of the Indian equity markets, pushing benchmark indices to fresh record highs.

“So far, we have already witnessed FII flows of over Rs 20,000 crore in February which is helping drive the markets. We expect the flows to remain strong for now which should help propel the markets to new highs,” Jyoti Roy, DVP – Equity Strategist, Angel Broking Ltd told Moneycontrol.

“However, we expect the pace of the rally to moderate from here on and some profit booking cannot be ruled out at higher levels,” he said. About 185 stocks in the BSE500 index hit a fresh 52-week high in February. These include Magma Fincorp which more than doubled in February, followed by Orchid Pharma, IIFL Finance, Bajaj Electricals, HSIL, Neuland Laboratories, and Mcnally Bharat, among others.