LIVE Now :Watch how Haryana is taking progressive steps towards SDGs only at ‘The Sustainability 100+ Dialogues 2021’-Haryana Roundtable
you are here: HomeNewsBusinessMarkets

Emkay upgraded Britannia and Colgate to buy from hold, while ITC and United Spirits to hold from sell.

The government provided a Rs 1.45-lakh crore stimulus by slashing the corporate tax rate from 30 percent to 22 percent, with effective rate lowered from 34.9 percent to 25.2 percent (including surcharge and cess).

The minimum alternate tax rate has been brought down to 15 percent from 18.5 percent. The government also announced a special 17 percent rate for new companies incorporated on or after October 1, 2019 and starting new manufacturing before March 2023.

Emkay also said the tax cut would provide significant benefits to most companies, with Colgate, Nestle, United Spirits and Britannia among the biggest beneficiaries, followed by Hindustan Unilever.

"Given the weak demand scenario, we expect companies to partially use the tax benefit to improve volume growth through higher A&P spends. However, unlike GST, the pass-through to the consumer is likely to be less, with most of the benefits being retained by companies," the brokerage said.

Emkay said, "Dabur, Godrej Consumer and Marico do not benefit from the lower tax rates. Moreover, higher spends by competitors, in our view, puts them in an unfavorable position as the increase in competitive spends may impact their earnings. We expect Marico to be the least impacted."

The brokerage upgraded Britannia and Colgate to buy from hold, while ITC and United Spirits to hold from sell. 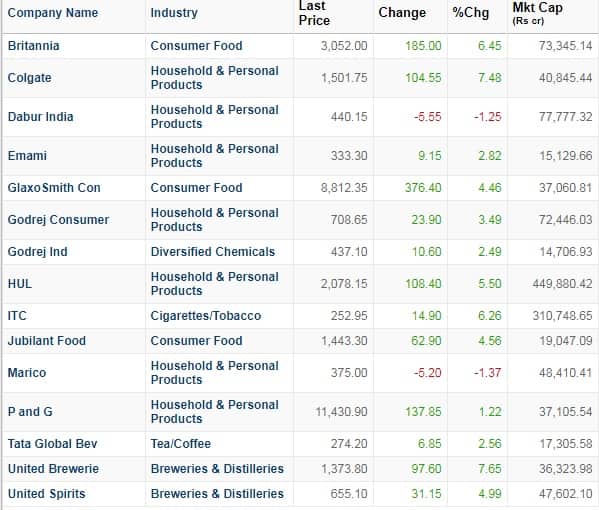