BOBCAPS CEO sees no big correction in market; all eyes on Gujarat polls

Ratnesh Kumar of BOBCAPS says there could be a face of stagnation in the market, but a deep cut is unlikely.

Frontline indices Monday gave up all the gains from the opening tick and continued the previous week’s trend of negative and rangebound moves. Sensex opened around 150 points higher, while the Nifty rose above 10,150 before giving up all these gains.

The movement in the past few sessions also raised concerns of a likely corrective phase setting in the market.

But Ratnesh Kumar, MD & CEO, BOBCAPS does not see a big correction. “There is an element of topping out seen. Valuations are on the higher side and the numbers are not coming through in terms of earnings,” he told CNBC-TV18, adding, with the year end approaching, last two-three weeks of December could see slowdown in foreign flows due to holiday season. So, there could be stagnation, but not a deep correction.

Speaking on the impact of major events, Kumar said the Street is expecting the Reserve Bank of India (RBI) to hold rates in the upcoming policy meet. Meanwhile, for Gujarat elections, the market is looking at incumbents retaining the mandate. “Any disappointment there could impact the market,” he told the channel. 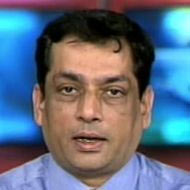 Having said that, he makes a note that over the next two quarters, base effect will play out for earnings and economic data. So, the numbers will be good, he said.

In terms of stocks and sectors, he said there are low expectations from the IT services space (referring to Infosys) and any positive development will have a good impact on the stocks.

But he continues to remain negative on the pharmaceutical space. “Many regulatory surprises will keep hitting the sector. “In a market, where there are plays on economic recovery, why should one go into this space?” he asks.

In case of NBFCs, he recommends staying away in a situation of higher wholesale rates and bond yields.