Exceptional loss for the quarter stood at Rs 30,711 crore against Rs 144.9 crore in June quarter, the company said.

The exceptional loss for the quarter stood at Rs 30,711 crore against Rs 144.9 crore in June quarter, the company said.

Company provided total Rs 28,450 crore as a charge in Q2FY20 in the absence of Supreme Court relief on AGR dues.

Airtel said in the absence of available reliefs, the company has provided for an additional amount of Rs 16,815 crore as a charge in the quarter towards license fee payable as estimated based on the Subpreme Court Judgement.

In addition, an amount of Rs 11,635 crore with respect to spectrum usage charges (SUC), based on the definition of AGR, has further been provided as a charge to profit and loss as estimated, albeit the company believes SUC is a charge related to use of spectrum and should be levied only on the AGR earned from wireless access subscribers/services, it added.

On October 24, 2019, the Supreme Court upheld the view considered by Department of Telecommunications (DoT) in respect of the definition of Adjusted Gross Revenue (AGR). The court allowed a period of three months to the affected parties to pay amounts due to DoT.

"This judgement has significant financial implications on the company," Bharti Airtel said.

The government has formed a high level Committee of Secretaries across ministries, to assess the stress in the telecom industry and recommend suitable measures.

Earnings before interest, tax, depreciation and amortisation (EBITDA) grew by 5.2 percent QoQ (up 41 percent YoY) to Rs 8,936.3 crore in the quarter ended September 2019. Margin expanded to 42.3 percent during the quarter, up 130bps sequentially and 1,080bps YoY. 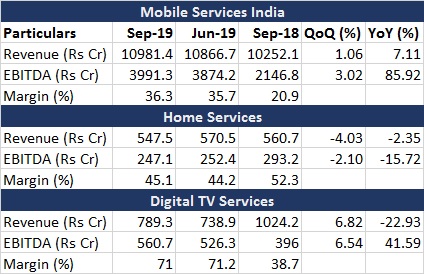 Company's mobile services business' average revenue per user (ARPU) dropped to Rs 128 in Q2FY20, from Rs 129 in previous quarter. Total subscriber base at the end of September quarter stood at 30.47 crore, increased from 30.14 crore in previous quarter.

The company reduced its capital expenditure for the quarter to Rs 3,790.1 crore as compared to Rs 7,684.5 crore in the corresponding quarter last year and Rs 5,046.8 in the previous quarter.

Hence, the consolidated operating free cash flow during the quarter stood at Rs 5,146.1 crore as compared to cash burn of Rs 1,341.2 crore in Q2FY19 and cash flow of Rs 3,445.8 in Q1FY20, company said.Get access to India's fastest growing financial subscriptions service Moneycontrol Pro for as little as Rs 599 for first year. Use the code "GETPRO". Moneycontrol Pro offers you all the information you need for wealth creation including actionable investment ideas, independent research and insights & analysis For more information, check out the Moneycontrol website or mobile app.