Booming markets fuelled a flurry of IPOs in the March quarter, raising hopes that the primary market will continue to see more action in the new fiscal year if conditions remain favourable.

It was raining IPOs (initial public offerings) on Dalal Street in March. A total of nine companies listed on the bourses - NSE and BSE - in March. Four out of these nine newly-listed companies were trading below their issue price as on March 31, 2021. In total, these 9 companies raised about Rs 6,255 crore. Stocks like MTAR Technologies and Nazara Technologies listed with whopping premiums of 85 percent and 79 percent, respectively. The biggest issue in terms of size was Kalyan Jewellers IPO, which raised 1,175 crore from the primary market. But it failed to make its investors happy as it listed at a 15 percent discount to the issue price. The stock is still trading below its issue price of Rs 87 per share. The list of 9 stocks only considers the companies that were listed in March, and excludes the firms that launched their IPO in March, but have not listed yet. (Data Source: ACE Equity, Chittorgarh)

The IPO market continued to boom in the first quarter of calendar 2021 as 17 companies closed initial public offerings to raise Rs 18,800 crore, the highest since the same period in 2018.

This also one of the highest counts of mainboard IPOs in a single quarter.

The March quarter of 2018 saw 14 IPOs that raised a total of Rs 19,275 crore. This quarter is also remembered for the beginning of southward journey in the broader space after a stellar run of around 48 percent in BSE Midcap and 60 percent in BSE Smallcap indices in 2017.

The huge gush of global liquidity boosted sentiment in the primary as well as secondary markets as FIIs poured in more than Rs 53,000 crore into Indian equities in March quarter of 2021, against the outflow of Rs 54,235 crore in the same quarter of last year, when the COVID-19 pandemic began.

"As seen in the past, liquidity tailwind had led to a mad rush of IPOs and other capital raising initiatives by companies. Given the availability of ample money at lower cost, we will continue to see higher public issuance in the coming financial year," Poonam Tandon, CIO at IndiaFirst Life Insurance Company told Moneycontrol.

The initial public offering is a system through which the company raises required amount for its expansion, working capital etc. or gets listed on the bourses to give an exit route or allows partial offloading of shares by existing shareholders.

The mood in the primary market was also boosted by bullish sentiment in the secondary market. The market continued to be at record highs untill the middle of February after which it consolidated within a 1,000-1,200 range of Nifty. Overall, benchmark indices gained about 3.5 percent through the quarter but the broader markets outpaced them with the BSE Midcap index gaining 12.5 percent and Smallcap index rising 14 percent in March quarter. 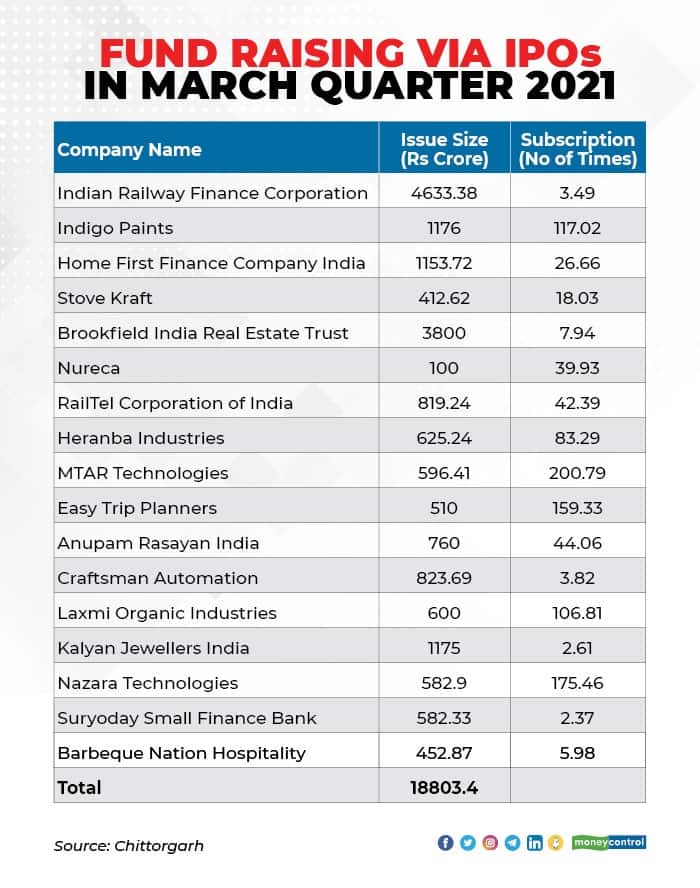 The March quarter started with the IPO of Indian Railway Finance Corporation, a finance subsidiary of Indian Railways, which raised Rs 4,633.38 crore the highest by a single company in the quarter.

Indigo Paints, Home First Finance Company India and Kalyan Jewellers were at the third spot in terms of fund raising as they raised more than Rs 1,150 crore each through their public offers in March quarter.

The smallest among main board IPOs was Nureca, a healthcare and wellness products distributor, which mopped up Rs 100 crore through its public offer.

The period ahead is expected to be strong for primary market only if the sentiment continues to be positive along with money flow, experts feel.

"Most companies would like to access the capital markets when the sentiments are positive as the valuations are always richer in such times and the ease of subscription goes up. We are now looking at a multi-year rally and if the market sentiments remain bullish, there should be a spate of IPOs in the coming years," Raghvendra Nath, MD at Ladderup Wealth Management told Moneycontrol.

Disclaimer: The views and investment tips expressed by investment expert on Moneycontrol.com are his own and not that of the website or its management. Moneycontrol.com advises users to check with certified experts before taking any investment decisions.
Sunil Shankar Matkar
TAGS: #IPO - News #Market Edge
first published: Apr 2, 2021 09:01 am