Chief among them were sharp moves in the bond market that indicated worsening expectations for economic growth and inflation. Critics also noticed that a dwindling number of stocks was driving the broad market’s rise toward more records.

Even before Monday’s swoon — the worst day for stocks on Wall Street in a couple months — the market was flashing concerning signals.

Chief among them were sharp moves in the bond market that indicated worsening expectations for economic growth and inflation. Critics also noticed that a dwindling number of stocks was driving the broad market’s rise toward more records.

From June 1 through July 16, the S&P 500 climbed nearly 3 percent and set more than a dozen records along the way. But during that span, 57 percent of stocks in the S&P 500 fell. They lost an average of roughly 7 percent, mirror the average gain of the stocks in the index that rose.

Strategists at Morgan Stanley call the narrowing leadership in the US stock market “bad breadth,” and they say it’s a sign the market’s run is moving from the early days of its cycle to the middle.

Banks, airlines and other industries that depend on a strong economy to thrive were among the losers as doubts crept into the market that the economy could fulfill investors’ lofty predictions.

That’s in sharp contrast to the first five months of the year, when 87 percent of stocks in the S&P 500 rallied and the index rose 11.9 percent. It’s a concept that market watchers call “breadth,” and they say it’s a healthy sign when many stocks are lifting the market.

What’s driving the broad market higher this summer are the relatively few most influential stocks. Apple, Microsoft and other Big Tech stocks all rallied powerfully through June and July, for example, in part because investors expect them to grow almost regardless of the economy’s overall strength. 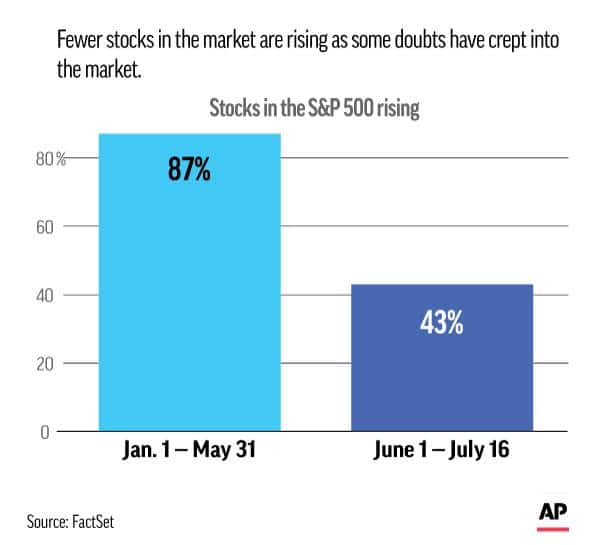 Because they’re so massive, and because the S&P 500 gives more weight to movements by stocks with larger valuations, gains for these Big Tech stocks are masking weakness across much of the rest of the market.

American Airlines, Delta Air Lines and United Airlines all lost at least 16 percent from June 1 through July 16, for example, as worries mounted about slowing economic growth. But to get to the size of one Apple, you would have to combine all three airlines — and multiply that by more than 45 times. Apple stock rose 17.5 percent from June through mid-July.

To be sure, measures of breadth in the S&P 500 are still above their average levels for the past few decades.

But breadth has nevertheless narrowed sharply from earlier this year, marking an inflection point for the market. And looking at stocks beyond the S&P 500, which only includes the biggest US companies, accentuates the divergence. While the S&P 500 is still within a few percent of its July 12 record high, the smaller stocks in the Russell 2000 have been scuffling since hitting a peak in March. As of Monday they’d fallen nearly 10 percent from that high.

Stocks from emerging markets have also struggled as the pandemic worsens in many countries due to the delta variant. The MSCI Emerging Markets index, which includes stocks from Brazil, China, India and other developing economies, has been bouncing up and down for months after falling more than 10 percent from its peak set in February.

Strategists at Morgan Stanley say the bull market’s deteriorating breadth seems to be foreshadowing a sharp slowdown in corporate profits and an “economy that may feel worse than most are expecting."