Axis Securities sees Nifty at 18,400 by March, bets on these 16 stocks

Axis Securities says profitability will shift from commodity producers to commodity consumers, with banks, automobiles, discretionary consumption and industrial themes looking attractive in the near term

The market gained 9 percent in July as FIIs returned, commodity prices cooled, the US Federal Reserve hinted at a slow pace of rate hikes and signs of weakening inflation bolstered sentiment.

August, too, has started on a positive note but after the sharp rally from the June lows, Axis Securities has said the market could be range-bound in the near term, even as the brokerage maintains its Nifty target at 18,400 by March FY23.

The renewal of buying interest among foreign institutional investors (FIIs) after consistent selling since October 2021 was a big relief for the market.

In the first two days of August, FIIs have bought shares worth more than Rs 3,100 crore against selling Rs 6,500 crore worth of shares in July, which was largely restricted due to buying in eight of the 21 sessions during the month.

Axis Securities believes the worst of the FIIs outflow is over and the selling trend is likely to slow down in August with some tapering already visible in July 2022.

The reduced intensity of FII selling was seen after the Federal Reserve hinted it could slow down rate hikes as would focus on inflation as well as growth.

Hence, "the market narrative has now shifted from inflation concern to growing concern and in this backdrop, how the sustainable demand scenario pans out in the near term remains to be keenly observed," Axis Securities analysts said in a recent note.

Also read: Smaller may be better as IT sector braces for stronger macro headwinds

Along with other commodity prices, oil also dropped sharply and stabilised at around $100 a barrel in the international markets due to demand concerns, especially after rising fears of a recession in the US and Europe and China's Covid-zero policy.

After sharp recovery in the services PMI, the brokerage believe the services sector is likely to do better in the upcoming months.

Most quarterly earnings were largely in line or better than estimates barring a few disappointments, with positive management commentaries.

"Some earnings disappointments were seen in commodity and export-oriented themes. Management commentaries were upbeat and guided that easing supply chain constraints with a cool-off in commodity prices, expected recovery due to the upcoming festival season, and pick-up in infra projects were the key positive highlights during the June quarter," Axis Securities said.

The brokerage foresees FY23 and FY24 Nifty EPS at 826 and 920, down 2 percent and unchanged after Q4FY22 earning season. Its estimates are on the conservative side and 9 percent below the consensus estimates.

Axis Securities said that macroeconomic developments will continue to influence the market in the near term and will limit the upside for the market.

These include a) the ongoing Russia Ukraine conflict; b) the trend of the commodity prices (including Oil); c) the direction of inflation, and d) growth in the developed world.

The brokerage, however, maintains a positive long-term outlook on the market supported by a favourable structure emerging with increasing capex enabling banks to improve credit growth.

It has maintained the Nifty March FY23 target at 18,400 by valuing it at 20X on FY24 earnings against 22X earlier, though it cut the Nifty multiple to accommodate the rising interest rate scenario, which started after a 40bps rate hike in early May 2022 and 50bps in June 2022.

Given a domestic interest first and India as a domestic consumption economy, local or domestic-oriented themes are likely to perform better in the near term, Axis Securities said.

The brokerage believes that profitability will shift from commodity producers to commodity consumers. Keeping this in view, banks, automobiles, discretionary consumption and industrial themes look attractive for the near term over export and commodity sector themes. 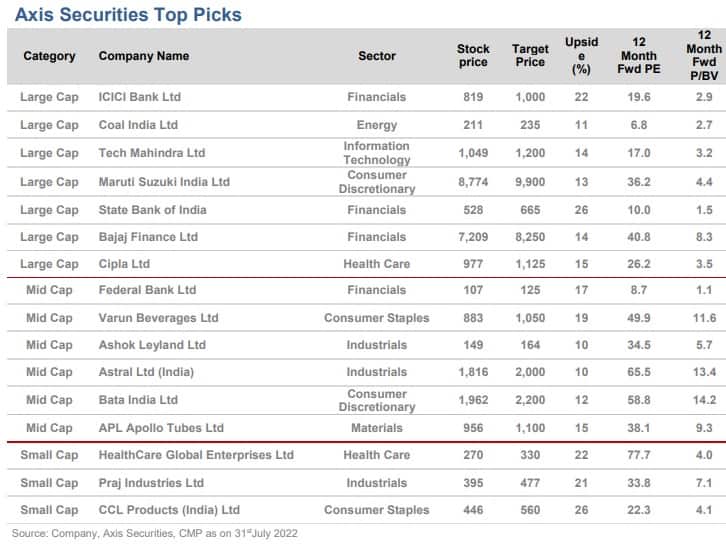 Disclaimer: The views and investment tips expressed by experts on Moneycontrol.com are their own and not those of the website or its management. Moneycontrol.com advises users to check with certified experts before taking any investment decisions.
Moneycontrol News
Tags: #Market Edge #Nifty #Sensex
first published: Aug 3, 2022 03:21 pm